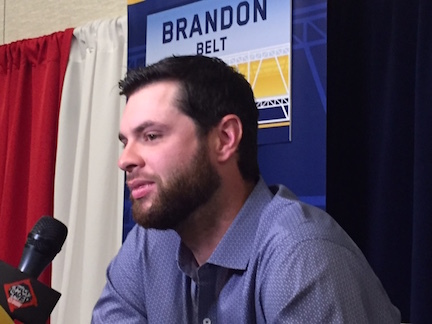 In the final hours of MLB All-Star voting, Brandon Belt made the team for the first time in his career. Joining his teammates, Madison Bumgarner, Buster Posey and Johnny Cueto, the Giants' presence remains big since claiming their first MLB World Series back in 2010.

Many say your first year is a blur because your moving so fast with appearances, media day, and countless interviews. But the guys who paved the way before him say, these are memories you want to cherish your entire career. So what does it mean to be recognized as one of the best in baseball?

"I was really excited about him [Brandon Belt] being here and watching him go through this whole deal," Bumgarner said. "We're pretty well represented this year and to watch Johnny and Buster start is awesome."

Belt earned his spot via the fan vote right before the deadline. His performance during the first half has exceed beyond what anyone expected. He's second on the team in homers behind Posey's 11 and second in RBIs with 47 behind shortstop Brandon Crawford's 58.

He's also reached a mark that he's never accomplished in a full season. Belt's hitting .300 with 10 home runs, 46 RBIs and leading the National League with 27 doubles. It's by far his best year of his career. Since returning from an injury earlier in the year, Belt's developed better plate discipline.

"That's the cool thing about my teammates, they enjoy relieving their first time through me and really enjoy my reaction to all of this," Belt said. "I'm just following them around to learn as much as I can."

While living in the moment, Belt talks about the final hour in which he waited along with his family to see if he made the All-Star. Once the starters and reserves were announced, San Francisco dominated social media with the #VoteBelt that caused a media frenzy.

"I didn't think about it until the final minute, like 12:55 on the last day I was ready to throw up! I was very anxious and just ready to get it over with, I wanted to make the All-Star but prepared myself if I didn't. I know my wife voted for me like a million times"

The Giants lead MLB with the best record and managed to succeed without a few of their key starters. Hopefully, the return of Hunter Pence, Joe Panik and Matt Duffy will spark a trip back to the World Series. San Francisco's starting pitching has been phenomenal. Bumgarner threw a gem just shy of a no-hitter against the Arizona Diamondbacks right before the break.

"Should be a fun second half, the starting pitching has been great for us and the bullpen seems to be finding their groove," said Posey. "We just have to keep our nose down and see what happens."

"Are attitude doesn't change, we have the same goal everyday, we have a good shot of winning as many games," Belt said. "It's pretty cool to watch and hard to expect the young guys to exceed their expectation and just shows how much depth this organization has."