On May 5 the Vermont House followed the Senate in passing the final version of a health reform bill that creates a path for a universal, publicly financed health care system in Vermont. Governor Peter Shumlin has confirmed he will sign the bill into law.

This makes Vermont the first state in the country to move toward a universal health care system that will provide health care as a public good for everyone. Legislators and advocates alike have compared Vermont's role to that of the Canadian province of Saskatchewan, which half a century ago spearheaded the establishment of universal health care in Canada.

The bill states that Vermont will create a publicly financed health care system, Green Mountain Care, to provide comprehensive, high-quality coverage as a public good for all Vermont residents, regardless of income, health status, or employment. Green Mountain Care will be implemented once the requirements of the federal health reform law have been fulfilled, along with several other conditions imposed by the bill. Some key decisions have been postponed to future legislative sessions, including the development of a financing mechanism for the system and the design of a health benefits package.

The pioneering nature of Vermont's health reform has its roots in a people's movement, which caused reform efforts to be driven by principles, rather than political calculation, industry interests, or professional advocates and lobbyists. While strong attempts were mounted to divert and hijack the reform process, especially by large corporations and the insurance industry, it was the growing vision of health care as a human right that captured the public imagination and created the political space for action by the administration and legislature. Observers largely credit this achievement to the grassroots organizing by the Healthcare Is a Human Right Campaign, led by the Vermont Workers' Center, which engaged many thousands of ordinary Vermonters in demanding their human right to health care.

The Healthcare Is a Human Right Campaign has built a broad-based people's movement guided by principles, such as universality and equity, rather than by specific policy or legislative proposals, such as single-payer. By shifting the focus from cost containment (which has dominated debates on health care and other public goods) to people's collective needs and rights, the campaign placed people at the center of policy and practice, challenging the powers that be. When viewed as a human right, health care becomes a unifying concern for everyone, not just for the uninsured, or for individual "consumers" struggling to pay their bills, or for workers seeking to hold on to benefits. This unity the campaign achieved at an organizing level has helped to embed human rights principles in public and political discourse, which in turn has advanced the goal of treating health care (and potentially other human needs) as a public good, financed through taxation, rather than a market commodity. 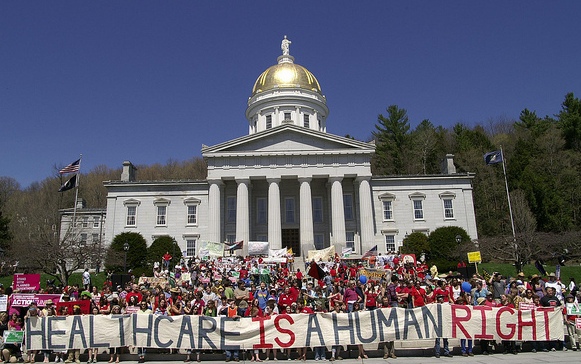 The success of this emerging grassroots organizing model -- led by the people, inclusive, based on human rights principles -- became particularly clear when pressure from the Healthcare Is a Human Right Campaign prompted legislators to drop a last-minute amendment that would have excluded undocumented people from universal health care. The Campaign mobilized hundreds of Vermonters to stand up for the human rights principle of universality, and after days of constituents' phone calls, protests, and a large rally on May 1st, the exclusionary amendment was struck.

Vermonters clearly set an example with their steadfastness and unflinching readiness to take a moral stance and reject the effort to divide the community along lines of race, ethnicity or national origin. Their stance raises the bar for people elsewhere when confronted with the use of immigration as a wedge issue.

There is no doubt that strong solidarity and a principled stance will be needed as the struggle for universal health care continues, in Vermont and beyond. If the deliberate exclusion of undocumented people presented a clear line in the sand, the maneuvering of private insurance companies has been harder to detect and defeat. The industry and its corporate allies are a formidable opponent, with deep pockets and well-trained patience. In Vermont's bill, private insurance companies, whose business model depends on restricting our access to care, managed to keep a foot in the door. This means that the development of the new system's financing mechanism may well be the most important struggle yet to come. Unless Green Mountain Care will be funded as a public good, through equitable contributions from all of Vermont's people and businesses, the system could be downgraded to a "public option", torn apart by opt-outs before it even starts.

Well aware of these challenges, human rights campaigners are prepared to take on corporate forces. While the Healthcare Is a Human Right Campaign does not rely on legislative actions to boost its organizing, it has grown with each legislative success. As people across the country look closer at Vermont's most recent achievement, it may inspire them to help build the movement for health care as a human right. Such an impact would rival the significance of the universal health care bill itself.

Photo of rally on May 1, 2011, by Dylan Kelley, Vermont Workers' Center