A day before the Greek government announced the referendum and four days before it imposed capital controls, the first-ever venture fair was held in Greece. After five years of a crippling recession, the Greek economy was on the road to recovery for the first time this year with a forecast of 3 percent GDP growth. However the past few months have seen the Greek economy take a turn for the worse: after a disastrous standoff with its international creditors and the imposition of capital controls, the GDP is now expected to drop by -3 percent to 2.5 percent, and the "real" economy has nosedived bringing enormous setbacks to businesses, particularly SME's which are effectively isolated and unable to pay their international suppliers. At a time when the whole notion of entrepreneurship in Greece was being tested, this venture fair was seen as a ray of hope and a chance for business people to meet potential investors from all over the world.

The fair was hosted by The Hellenic Initiative, an international movement run by members of the Greek diaspora, that seeks to bolster Greek entrepreneurship. Over the past few years, the group has promoted various charitable activities -- but most importantly economic recovery initiatives which have -- understandably -- often been neglected as crisis relief became the center of most charitable activities in Greece.

The event, which more than 100 European and American investors attended, took place behind closed doors at the Hilton Athens at the end of June. The notion that Greece is not the most hospitable environment for business is most likely taken as fact by now. As Achilles Konstantakopoulos, chairman and CEO of ΤEMES, noted in his brief introduction speech: "Greeks have to face bureaucracy as well as the market."

George Stamas, the co-founder of The Hellenic Initiative, explained in his own speech how the venture fair coincides with "some of the hardest times that Greece has faced to this day."

During the event, 19 up-and-coming Greek companies had the opportunity to present their businesses. Each had five minutes. After the presentations, the judges' panel, which consisted of experienced business executives (often Greeks of the diaspora themselves) from around the world, provided feedback, observations, and advice to the participants. 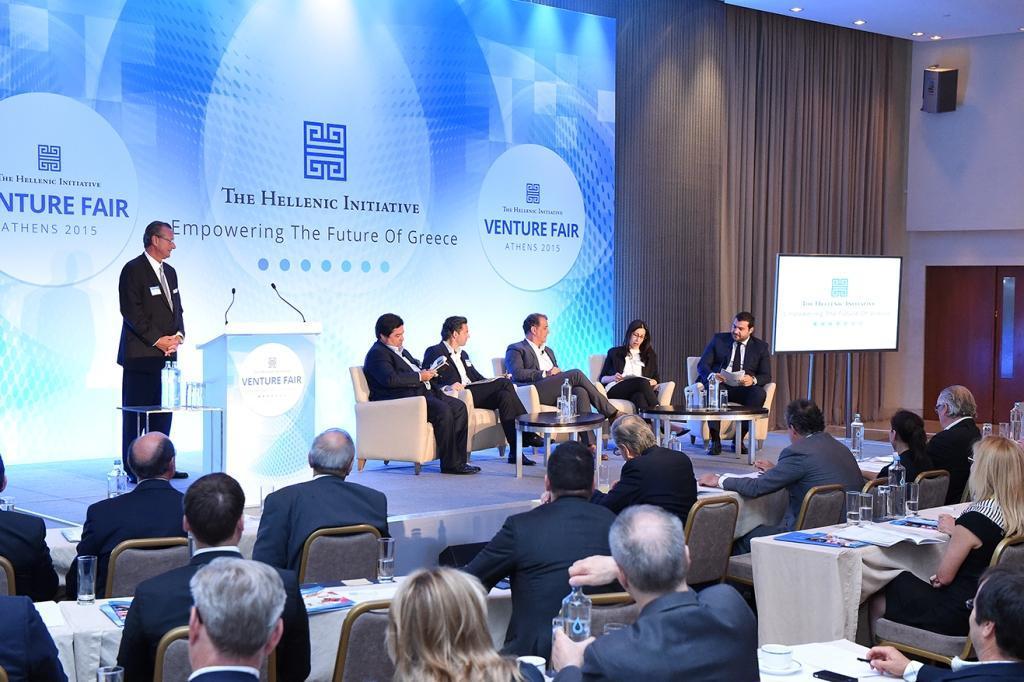 There was a wide array of participating businesses -- from agriculture to tourism, transport, to logistics and shipping.

Especially impressive were the businesses that have traditional Greek commercial activity, but also innovate. One such example is Terra Creta, a company based in Kolymvari, Crete, that manages something quite difficult: to produce extra virgin olive oil in large quantities, and has already expanded to the American market through the online channel QVC. As presenter Fotis Sousalis explained, the reason they wanted to attend the venture fair was to find partners with whom to expand in the American market in a more organized manner. The judges were particularly impressed by Terra Creta's "traceability," i.e. the possibility for the consumer to "trace" their olive oil. By inputting the five digit lot number of each olive oil product on the company's website, the consumer can trace back the olive oil to its place of origin (even down tot the exact olive grove!) as well as see its chemical analysis and date of production.

Ideas in other less "sexy" areas were also successful: The judges' interest was monopolized by Join Cargo. Greek-Dutch Roxanne Koutsolouka's company is a web services platform that matches companies wishing to carry goods with carriers who need loads to fill their trucks. "Many trucks are almost empty. Our job is to fill those trucks," said Ms. Koutsolouka during her presentation.

Another very good impression was made by Owiwi (a company HuffPost Greece covered months earlier) which aspires, as co-founder Elias Vartholomaios explained to the attendees, to sell the notion of job recruitment through video games. It was by no means the only "online" based business at the fair.

Incrediblue is already in business chartering yachts (with or without a captain and crew) and as its founder, Antonis Fiorakis, explained, they came to the venture fair "looking to expand." Then there was Yolenis, which aspires to become the most successful online delicatessen of Greek products worldwide, while Park Around helps solve the issue of finding parking with an app.

Almost all companies and judges expressed their enthusiasm for the first Greek venture fair despite the setbacks and hardships of the Greek market. "I think that as a team, we learned a lot from all this," said Stratis Andreadis, the co-founder of Saltybag, a company from Corfu that manufactures bags from used sails.

Conditions for Greek entrepreneurship remain difficult and things will likely stay challenging for a while. But as Kurt Heiar, professor at the University of Iowa and collaborator of the Hellenic Initiative, said when referring to the 19 entrepreneurs who took part in the venture fair, risk and uncertainty are part of everyday life for an entrepreneur: "We live with uncertainty, we live with risk, that is what we do. We are not afraid of uncertainty or the threatening winds blowing in the world of politics. We shall move on, we shall succeed and we shall make our dreams a reality."

This piece originally appeared on HuffPost Greece, and was translated into English.