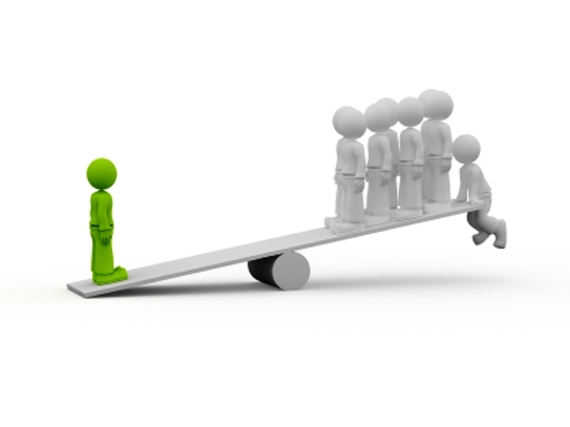 I am among those economists who have argued that expansive fiscal policy has been missing as a lever to support recovery in advanced economies, especially in the Eurozone -- see here and here.

At the same time, I have cast doubts on recent attempts of using it to prop up growth in some emerging markets -- see here and here in the case of Brazil.

In a recent debate, I was asked whether I was using a double standard, by taking an anti-austerity opinion on advanced economies, while favoring it elsewhere.

Chapter 3 of the latest World Bank's Global Economic Prospects (GEP) sheds new light on that question. As part of a three-pronged rationale for fiscal policy, countercyclical policies may be used as a tool for macroeconomic stabilization. However, as approached in the report, two related preconditions must be in place for expansive fiscal policies to work:

First, there must be enough fiscal space available. Fiscal space corresponds to how far the fiscal stimulus can go without jeopardizing fiscal solvency and the government balance-sheet soundness (in terms of both maturity profile and dependency on nonresident creditors, which may raise rollover or liquidity risks for sovereign debt). Policies that can stress private sector balance sheets and thereby generate contingent fiscal liabilities are also to be reckoned.

Second, fiscal policy must be effective in terms of raising the level of economic activity. Such effectiveness may be gauged by the "fiscal multiplier," i.e. the output increase resulting from one unit of local-currency increase in government consumption. The report highlights the strong evidence pointing out how the sizes of such multipliers vary in accordance with macroeconomic conditions and country characteristics.

In the world of fiscal policy, cycles are important. The fiscal multiplier tends to be smaller during expansions than in recessions, because of lesser installed capacity and unemployed labor, as well as a likely smaller share of households facing liquidity constraints.

The availability of fiscal space is also of paramount importance and is a big factor in determining the effectiveness of fiscal policy. When fiscal space is narrow, the multiplier tends to be dampened through two channels: interest rates tend to move up across the board as a consequence of perceived higher sovereign credit risks; additionally, private agents are more likely to anticipate future tax increases and in turn trim their spending.

The GEP chart below displays World Bank estimates of fiscal multipliers for a sample of Emerging Market Economies (EMEs) and Frontier Market Economies (FMEs) for different levels of fiscal spaces -- measured as fiscal balances as percent of GDP -- at horizons of one and two years. The conclusion follows:

So, how does what we now know about the fiscal multiplier/fiscal space dynamic help me respond when I am accused of applying "double standards"? Differences in cyclical stages and fiscal spaces lead to different assessments of fiscal policy effectiveness -- something obvious to economists, but not necessarily something policymakers take to heart.

Back in 2012, I argued here that fiscal policy had then taken a restrictive turn in the US and in the Eurozone as a whole for reasons other than exhaustion of fiscal space. As for Eurozone countries under stress, given their dire conditions in terms of unemployment and idle capacity, the discussion above helps us understand why their own fiscal multipliers -- operating downwards -- ended up delivering a greater shot in the arm than many expected. To wit, the claim that fiscal austerity has been over-prescribed as necessary medicine with respect to the US and Eurozone as a single economic entity.

Contrast this with the situation in many EMEs and FMEs. As approached by the GEP, after building fiscal space by shrinking debt and closing deficits during the 2000s, most of those countries were able to use it for countercyclical fiscal stimulus during the Great Recession of 2008-09. Furthermore, they could take advantage of historically low global interest rates then prevailing. That fiscal space has not subsequently been built up again and since the era of of abnormally low interest rates is bound to end one can understand calls for caution when it comes to any move to over-extend an expansionary fiscal stance. The report suggests institutional frameworks -- fiscal rules, stabilization funds and medium-term expenditure frameworks -- that can help those countries widen their fiscal space and enhance policy outcomes.

The Brazilian case may be seen as one in which both cycle and space limits to expansionary fiscal policies are currently binding. Brazil's round of expansionary fiscal policies implemented in 2012-2014, did not lift "animal spirits" as hoped. This was due not only to structural reasons, but also because of the perception of fiscal deterioration and the need for monetary policy tightening since 2013. Looking ahead, the fiscal squeeze starting to be implemented this year is also required not only to restore fiscal confidence, but also to underpin the process of upward correction in regulated prices and of exchange rate devaluation, the inflationary impact of which would lead to much higher interest rates in the absence of a support from fiscal policy - see here.

In sum, one might say that, instead of "double standards", the asymmetrical stance of fiscal policies that I have been advocating may rather be seen as standards that make sense given different levels of economic slack and fiscal space in diverse economies.

All opinions expressed here are the author's own and do not necessarily reflect those of the World Bank.