MELBOURNE, Australia -- The stink from Vietnam's fish kill scandal -- which left some 70 tons of dead fish scattered across the beaches of four of the country's provinces and fishermen out of work -- is symptomatic of something greater than worries about food security and the environment: access to information and the ability to distribute it.

On June 30, almost three months since the mass fish deaths began, Vietnam's newspapers all began printing the same story: Formosa Ha Tinh Steel Corp., a subsidiary of Taiwan's Formosa Plastics Group, blamed by many for the incident, had accepted responsibility for the industrial pollution that had caused the environmental fiasco and would pay $500 million in compensation. The government of Vietnam, which had been silent for much of this, also noted the company was responsible due to a toxic spill. Earlier in the month there was progress towards a verdict but no confirmation, as Tuoi Tre newspaper wrote:

On June 2, the government held a press meeting to announce that the cause behind the deaths had been identified, but it was being challenged by experts in order to ensure it was based on scientific, legal, and objective grounds before a final conclusion was confirmed.

While the public waited for answers and the tourism industry suffered, the press was also curtailed. As the New York Times mentioned in its reporting of the incident: "Officials said that it had been necessary to restrict news coverage of the disaster while the investigation was underway." This wasn't entirely unusual for the country whose journalists often face obstacles while doing their jobs, but it did highlight a situation that doesn't appear to be getting better anytime soon. Vietnam has consistently been ranked poorly for press freedom, and the fish death debacle shows recent changes in the Vietnamese press: environmental journalism is now more tightly watched as the public becomes more aware of problems -- and more likely to organize. In the wake of this scandal, the freedom to report thoroughly on environmental issues might be abating, just as it gains traction in the public commons in Vietnam.

In fact the reaction Thursday to the scandal served as a coup, of sorts, and a rarity in governmental response to similar offenses in the past. Going forward, the level of follow up reporting will determine more about how much press freedom will be allowed in these large-scale environmental cases with their mix of government oversight, foreign money and public anger at pollution. But for right now this new government line, and fine of half a billion in compensation, is encouraging in comparison to the wrist-slap fines of the past.

Up to now environmental and food safety issues have been allowable investigative stalwarts of the press for a while, likely because they're much safer topics than tales of actual, detailed official corruption or government mismanagement. But once somewhat controversial issues get enough public attention, coverage often lessens or is at least more carefully managed. Such was the case with our fish kill story, which made international headlines as well as people took to the streets in protest for the lack of accountability and information for this disaster.

But this is nothing new. In fact, those critical of the government can be locked up under three different sections of the criminal code: 88, 79 and 258. Vietnam's press is state-owned, but each news outlet is owned by different government organizations, rather than by the Communist Party directly. Instead, directives are issued and there is also a good measure of self-censorship; editors and journalists tend to know when a story or topic is incendiary. This 2008 paper, written as social media was just taking off, covers how Vietnam's press operates quite well.

When Vietnam's fish kill protests began over two months ago, people were angry at the lack of government action, the cavalier response from a spokesman for Taiwanese company Formosa assumed responsible for the pollution and worried for both food security and the livelihoods of those affected. By early May, protesters in Ho Chi Minh City numbered in the many hundreds or more, and were not simply activists but ordinary people, too.

What, for journalists, was largely apolitical investigative work now has a stronger political background thanks to a growing number of young activists and a more general unease over both pollution and food security in the population.

Before the news of the chemical spill and the fine broke this week, Formosa built a 10.6 billion dollar steel mill in Ha Tinh, a small, poor province south of Hanoi where a large amount of the fish washed up. The building of the plant was a coup for the provincial government that had lobbied hard.

Back then it was said that the piles of fish washed ashore were apparently the result of a one-time accidental dump of pollution in the sea via an underwater pipeline several miles offshore, according to initial press reports. Formosa spokesman's initial statement at a press conference stating that Vietnam would have to "choose" between a steel plant and catching fish and seafood set off a social media storm of people "choosing" fish.

Throughout the ordeal, the government blocked much reporting on the issue, citing its "sensitive nature" and so people turned to other avenues to express their frustration and share information. As Vietnam Right Now wrote on June 11, "With demonstrations banned, and the media firmly under state control, frustration at the government's handling of the mass fish deaths in central provinces has increasingly been restricted to social media."

Protester displays picture of the mass of dead fish on the shores of Vietnam. (Sam Yeh/AFP/Getty)

In May, about a month after the fish stink began, I wrote on U.S. President Barack Obama's first visit to Vietnam for The WorldPost and Australia's Lowy Institute, a Sydney-based foreign policy think tank. The American leader received a rapturous welcome and the public rancor over the fish saga evaporated at a time when things could have been uncomfortable for the government -- and gave the country a boost in positive press. President Obama's dinnertime trip to eat bun cha, a pork dish with noodles, was the headline of the day. "They've taken a break from choosing fish, but even a president can't be a distraction forever," I wrote in Lowy's Interpreter blog,

Sure enough, on June 5, protests and arrests began again. Pham Doan Trang, a longtime journalist-turned-activist, chronicled the events in a group email to journalists and academics. Trang was one of the activists slated to meet Obama during his Vietnam trip, but was prevented from doing so after the car she was covertly traveling in from Ho Chi Minh City to Hanoi was stopped by police. She wrote that post-Obama protests were more sparsely attended, to the point that in HCMC police outnumbered protesters. She also noted that many protesters were dragged away, beaten and interrogated by police and security forces, who used methods she likened to old Soviet techniques.

This social media aspect of journalism can have the effect of distortion: untruths can be propagated in a blogosphere unrestricted by editorial standards. Even so, the reporting feels more honest than the official line printed in the papers.

Environmental sagas have made for compelling reporting in Vietnam over the past years, but as discourse moves into the civil society and social media realm, and interest in environmental issues increases, the government attitude towards them is changing and what, for journalists, was largely apolitical investigative work now has a stronger political background thanks to a growing number of young activists and a more general unease over both pollution and food security in the population.

Luong Nguyen An Dien, a Vietnamese journalist who recently returned after a stint at Columbia University's school of journalism, told me, "Now social media has boomed in Vietnam, and the authorities are increasingly wary of public sentiment there. To them, any environmental issue could be politicized. The fish kill is just an example."

Despite the crackdown from the government, reporters still usually report on sensitive issues until the subject gets too hot via social media. This social media aspect of journalism can have the effect of distortion: untruths can be propagated in a blogosphere unrestricted by editorial standards. Even so, the reporting feels more honest than the official line printed in the papers, which often go through screening and censorship by Ministry of Information and Communications. 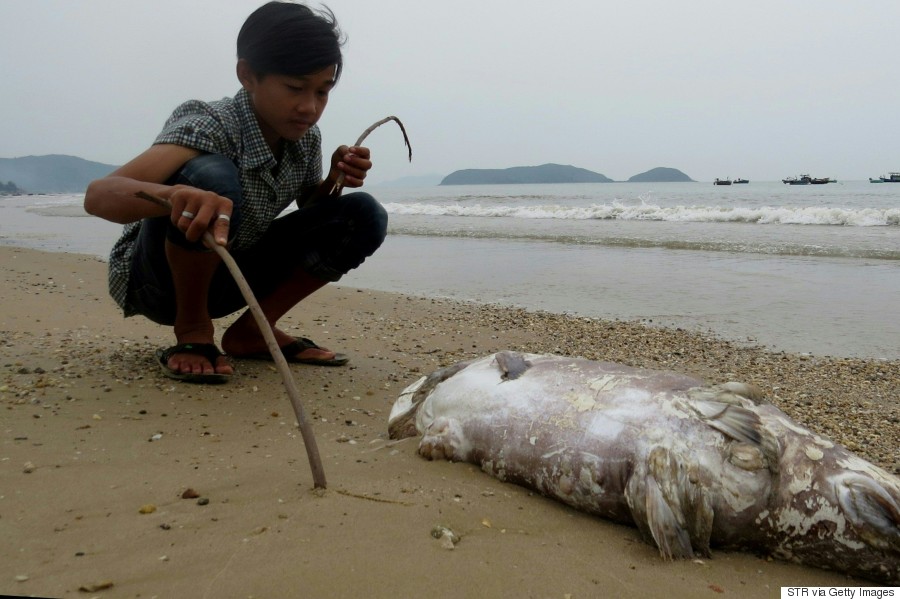 A boy looks at a dead fish on a beach in Quang Trach district in the central coastal province of Quang Binh. (STR/AFP/Getty)

Online environmental organization started to gain traction in Vietnam in 2009, when disparate groups came together to criticize the government's plans for bauxite mines in the ecologically delicate Central Highlands region. That they were Chinese-run only made people angrier. Citizens organized a campaign via Facebook that took the government by surprise and the site was intermittently blocked (though never officially "banned") for some time after. The same year, The Committee to Protect Journalists named Vietnam in the top "10 Worst Countries to Be a Blogger," following the detention of a blogger for her coverage of territorial issues between China and Vietnam.

In the past few years young activists are doing more than talking but actually criticizing the government. When Hanoi's city government announced a tremendous cull of the city's beautiful old trees -- all made from valuable wood -- young people organized online, and protested. Some protests quickly turned violent.

Dien, the Vietnamese journalist, remembers the last Taiwanese environmental scandal, when in 2008, MSG producer Vedan left a 10 kilometer section of the Thi Vai River in Dong Nai province ecologically "dead." There was anger -- and the story was heavily reported by Vietnamese press -- but apart from those affected, there were few protests and not much online organizing.

As food safety becomes a strong preoccupation, the environmental movement is going to pick up steam. And the freedom to report on it might be waning -- for now at least.

"At the time, the purpose of covering the Vedan case was to sneak through a bigger story -- why the Taiwanese MSG maker could get away with such blatant violations for such a long time.The final outcome fell short of that expectation: Instead it was all about how Vedan finally agreed to compensate Vietnamese farmers out of fear they would face a massive boycott," he said.

Dien has reported on environmental issues in the country as well. Writing for Vietnam Express he questioned why Monsanto, the company responsible for Agent Orange, is receiving such a welcome back into Vietnam after the chemical deforested so much land and led to birth defects in subsequent generations of the Vietnamese population.

This topic has not yet reached the proportions of the fish kill scandal, partly as there are no direct effects: no tons of dead fish. Whether people begin to organize around less immediate threats remains to be seen, but as food safety in general becomes a strong preoccupation, the environmental movement is going to pick up steam. And the freedom to report on it might be waning -- for now at least.