A stunningly preserved, soft-bodied fish that is more than 500 million years old could be the ancestor of almost all living vertebrates.

The fossilized fish, called Metaspriggina, sports characteristic gill structures that later evolved into jawbones in jawed vertebrates, according to a new study.

"For the first time, we are able to say this is really close to this hypothetical ancestor that was drawn based on a study of modern organisms in the 19th century," said study co-author Jean-Bernard Caron, a paleontologist at the Royal Ontario Museum in Toronto, Canada.

The primeval creature lived during a period from 543 million to 493 million years ago known as the Cambrian Explosion, the evolutionary "big bang" when almost all complex life appeared. [Cambrian Creatures Gallery: Photos of Primitive Sea Life]

Jawed vertebrates — such as fish, birds and humans — make up about 99 percent of the vertebrates on Earth, but scientists don't agree on how and when jaws first evolved. Scientists think that the common ancestor of jawed vertebrates was similar to eyeless, boneless, jawless fishes such as hagfish and lampreys, which diverged from their immediate ancestors about 360 million years ago and haven't changed much since.

But that wasn't always the dominant theory. In the 1870s, naturalist Karl Gegenbaur noted that living fish such as sharks have five or six pairs of bars that support the gills, and that these so-called gill bars bear a striking resemblance to jawbones. Based on that similarity, he proposed a theory, called the serial homology hypothesis, that jawbones in modern fish gradually evolved from an earlier pair of gill bars in some long-lost "father fish," from which all jawed vertebrates would have evolved.

Yet nobody had ever found evidence of this ancestral fish, and eventually, the hypothesis fell out of favor.

Then, in 2012, Caron and his colleagues uncovered dozens of fossilized fish, many of which were exquisitely preserved, in Marble Canyon in Canada's Kootenay National Park. The mud at the bottom of the Cambrian sea had likely cemented them in place 514 million years earlier, preserving many internal structures such as the heart, gut and muscles. 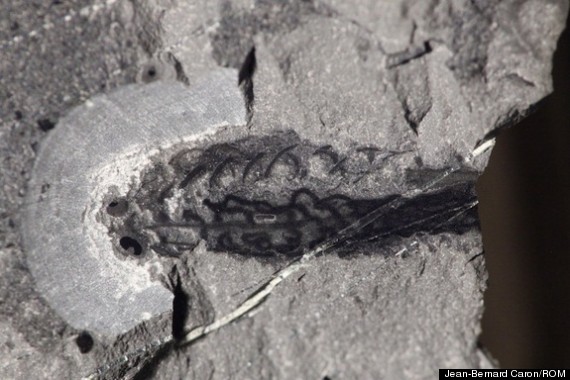 The fossil of Metaspriggina, with the head at left.

It turned out that the creature was very similar to a poorly known specimen called Metaspriggina walcotti that was found in sediments in the Burgess Shale nearby in Canada, as well as to other fossils found in China, Caron said.

The primeval creature was the size of a man's thumb, with a flattened head and single-lens, or so-called camera eyes, at the top of its head that could peer forward or up, Caron said.

"The direction of the eyes would have allowed them to see what was happening above them, which means they were probably living at the bottom," and may have even been able to evade the large predators of the day, such as the bizarre shrimplike sea monster anomalocaridid, Caron told Live Science.

The team was intrigued by seven pairs of structures on either side of the cavity at the back of the mouth, known as the pharynx. The first pair of these bars looked just like those Gegenbaur predicted in the hypothetical ancestor to jawed vertebrates.

In contrast, lampreys, hagfish and other jawless fishes have a more complicated basket-shaped series of gill structures, which suggests they evolved from a side branch of the vertebrate evolutionary tree that diverged long after Metaspriggina lived, said Jon Mallatt, an evolutionary biologist at Washington State University in Pullman, who was not involved in the study.

Other lines of evidence — such as the fact that jaws and gill bars develop from similar structures in shark embryos — also support Gegenbaur's notion, he told Live Science.

But the case for the Gegenbaur hypothesis isn't airtight, said Philippe Janvier, a paleontologist at the Museum National de l'Histoire Naturelle in Paris, who was not involved in the study.

Yet the fossil does have a spectacular feature: its well-preserved eyes, which resemble those found in other similar fossils "but provide much better evidence for camera eyes; that is, indisputable vertebrate eyes," Janvier told Live Science.

Metaspriggina was described today (June 11) in the journal Nature.

Correction: An earlier version of this article included a photo caption that misstated the head of the Metasprigginia fossil could be seen on the right. It is in fact on the left.