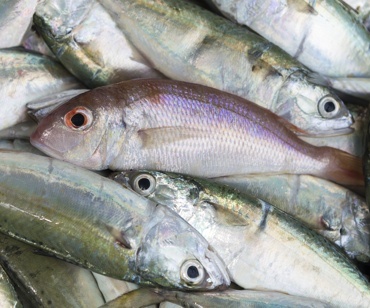 Omakase sushi bars and other high-end seafood menus are growing in popularity across the United States, showcasing the finest seafood available in the world as diners are becoming more adventurous, sampling their way from unagi to sea urchin. In fact, the U.S. is the world's third largest consumer of seafood after China and Japan -- we eat nearly 5 billion pounds of seafood a year! But there's a catch to the catch: Nearly half the time, we're not eating what we think we are...

Whoa, whoa, whoa. What do you mean?

From 2010 to 2012, Oceana tested more than 1,200 seafood samples to examine fraudulent labeling. After completing DNA analyses, they found that one-third of fish samples were mislabeled.

Well, what are they then?

Most commonly a cheaper relative or an entirely unrelated fish. Escolar (or snake mackerel) passes as "white tuna." "Red snapper" is often actually rockfish or tilapia.

The global seafood supply chain is incredibly complex -- fish pass through many hands before hitting your kitchen. It's estimated that 92 percent of seafood consumed in the United States is imported. Shipments can be mislabeled either by fishermen, wholesalers, or even chefs. And sometimes it can happen by accident -- some fish are incredibly difficult to identify once cleaned and gutted, and it's too costly to perform DNA tests on each fish. Additionally, the Government Accountability Office reports that just over 1 percent of imported seafood is examined by the FDA to make sure it's labeled accurately.

Why does this really matter?

For three key reasons: money, health, and sustainability. Most fraudulent fish sales are lower-cost fish being sold as higher-cost fish (think $8/lb tilapia sold under the guise of $24/lb red snapper or $14/lb flounder posing as $25/halibut). Basically, we're all spending extra money on inferior product. Or as Kimberly Warner, a senior scientist at Oceana puts it: "It's like paying for filet mignon but getting only ground beef."

The other issue is contaminants. Fish with high mercury levels -- like king mackerel, swordfish, shark and tilefish -- are passing as lower-mercury grouper, red snapper or halibut. A 2006 investigation by Consumer Reports discovered that 56 percent of "wild salmon" was actually farmed, unknowingly increasing consumer exposure to PCBs. On the extreme end, two Chicago residents were hospitalized after accidentally eating pufferfish, served as monkfish.

Then there's the sustainability issue: it's hard to eat sustainably when you don't know what you're eating. Many times, diners think they're eating a sustainable fish, when it reality it's an endangered relative.

Is anything being done to address this?

Yes! In 2012, 500 chefs, including Mario Batali, Jacques Pepin and Barton Seaver, sent a letter sent to the federal government requesting that seafood be traced from "boat to plate" to limit the cases of fish fraud. And it seems government officials are listening.

And most recently California State Senator Alex Padilla drafted a bill, SB 1138, meant to curb seafood fraud and improve consumer choice by making it illegal to knowingly sell mislabeled seafood. It unanimously passed the Senate Health Committee, and now goes on to the Senate Appropriations Committee.

How can I protect myself from fish fraud?

The best way to know what fish you're eating is to build a relationship with a local fisherman, essentially cutting out the middleman. Some food suppliers are using a system called traceandtrust.com where you can scan and look up your fish based on an assigned ID number. Other retailers and restaurants are utilizing QR codes that diners can scan and immediately learn the sustainability of the fish they're about to eat. For chefs, the best thing to do is check out Oceana's list of commonly mislabeled seafood and Monterey Bay Aquarium's Seafood Watch program, which provides consumer suggestions for purchasing seafood.