Coral trout living on Australia's Great Barrier Reef are directly beneath the Antarctic ozone hole, the world's largest, which is the result of the depletion of ozone in the atmosphere that normally protects humans from harmful UV rays.

"Further work needs to be carried out to establish the exact cause of the cancer, but having eliminated other likely factors such as microbial pathogens and marine pollution, UV radiation appears to be the likely cause," study researcher Michael Sweet, of Newcastle University in the United Kingdom, said in a statement.

Sweet and his colleagues examined 136 common coral trout (Plectropomus leopardus), and found 20 individuals, or 15 percent, showed dark skin lesions. The lesions ranged in size from small (covering just 5 percent of the skin) to large, covering the fish's full body, they report online in the journal PLoS ONE.

"The individuals we looked at had extensive — but only surface — melanomas," Sweet said. "This means the cancer had not spread any deeper than the skin, so apart from the surface lesions, the fish were basically healthy." 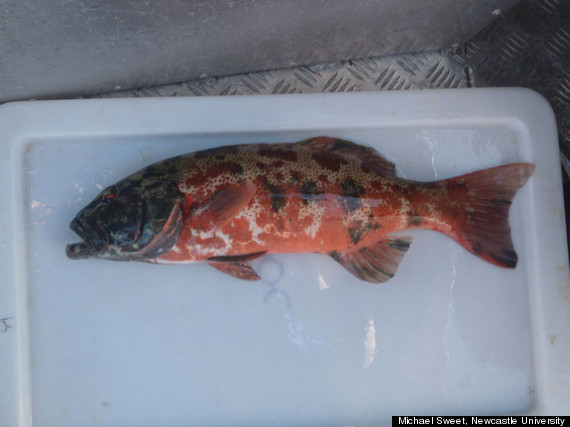 The skin cancer found on coral trout ranged in coverage from about 5 percent of the fish's body to nealy 100 percent, the researchers reported Aug. 1, 2012.

The lesions looked nearly identical to skin cancer found in humans, he said.

Once the melanoma spreads, Sweet added, fish would likely show signs of sickness, becoming less active and maybe feeding less. As such, the sick fish would be less likely to get caught. "This suggests the actual percentage affected by the cancer is likely to be higher than observed in this study," Sweet said in the statement.

While the diseased fish were caught around Heron Island and One Tree Island, the researchers do not know how many coral trout living elsewhere on the reef have skin cancer.

Until now, researchers had reported melanoma caused by UV exposure in fish only in lab conditions; these fish have been used as a model for studying human skin cancer.