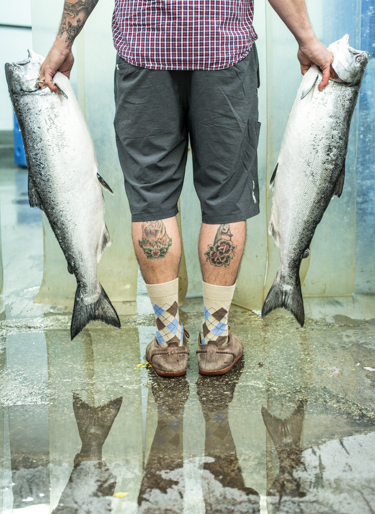 With beloved Blue Bottle in hand (a nod to the early morning hour) my collaborator, Julie Ann Fineman, and I head toward Two X Sea -- the celebrated sustainable-fish purveyor that resides on Fisherman's Wharf in San Francisco. Co-founders Bill Foss and Kenny Belov are onboard to let us grill them about the business.

As we make our way to the end of the pier we pass countless seafood slaughterhouses and food processors and we're both struck with acute pain -- for our oceans. We're so disturbed we ask Bill and Kenny how many of these places turn a blind eye to raping and pillaging our aquaculture.

Their answer is disconcerting: Two X Sea is the only fish operation that harvests ethically here. We point toward the many restaurants on the wharf and Bill adds, "Not one restaurant you're looking at now is a Two X Sea customer. They don't want to pay for sustainable fish."

Bill and Kenny are outspoken advocates for reexamining how we eat fish, and if you think eating wild fish is okay they're about to disabuse you. "Our ecology is being dismembered for the sake of having fish on our plates. Fortunately, though, fish doesn't have to be wholly off the menu." 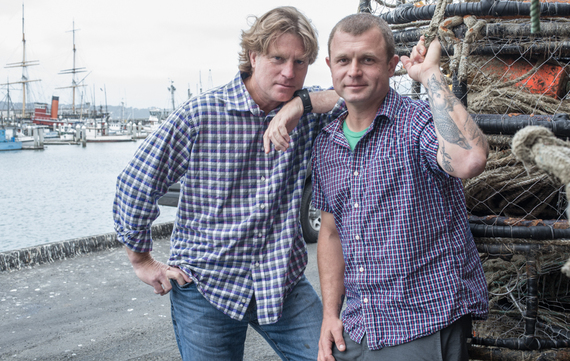 The pair are also seemingly unlikely sustainable seafood advocates. Bill co-founded Netscape, but he's passionate about food. So when he left the world of technology he aspired to build a Bay-area food community -- something sorely lacking at the time. In fact, he returned from a trip to Italy downright angry about the American food scene. "Food should make you scream in a good way. It's much more than something you just shove in your mouth." 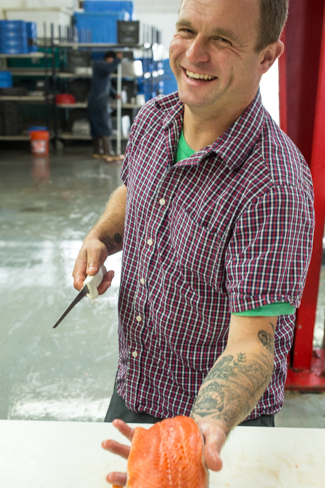 Kenny was born "Innokenty Belov" in Moscow where his parents were circus performers. Really. They moved to the U.S. when he was five and introduced him to the world of Florida ocean fishing. In 1996, he moved to San Francisco and ditched a career in photography to develop a new environmental concept -- a socially responsible restaurant.

Odd bedfellows, yes, but within minutes of our arrival at Two X Sea we're reassured to learn these guys don't simply evangelize about sustainable fish - they walk the talk. For starters they're both partners in FISH, a sustainable restaurant on the dock at the Sausalito marina. In 2004, FISH had a long list of suppliers that kept shrinking because many of the fishers regurgitated the exact same spiel. "Everyone uses white lies or 'eco-fibs' to make a sale," Kenny admonishes. "Somewhere along the line, someone spouts one thinking it won't hurt anything, but in the case of seafood that eco-fib is tantamount to plundering our oceans."

The truth is hard to swallow: our planet is running out of fish simply because we've been taking them out of water faster than nature can put them back. "At the pace we're going, according to one frightening estimate, the oceans could be virtually emptied of fish by 2050," says Jillian Fry, project director of the Johns Hopkins Center for a Livable Future. 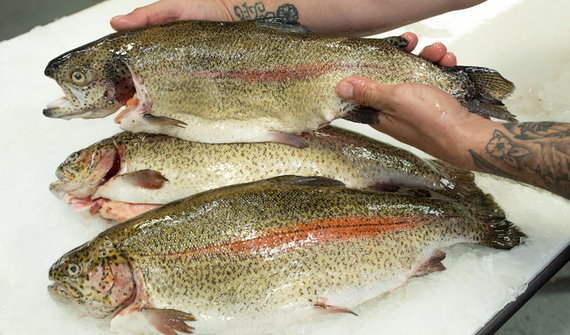 Frustrated with the product they were getting at FISH, in 2008 Bill and Kenny created the McFarland Springs Trout brand -- the world's first deliberate collaboration to responsibly farm sustainable fish. It's such an incredible operation we'll soon publish a part deux of this article, but for now we'll tell you this: they're farming trout using a fully vegetarian diet and the results are stunning. 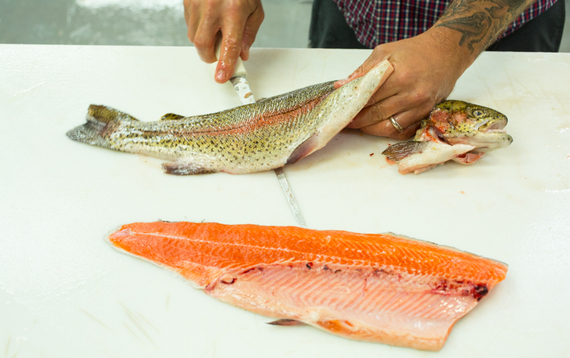 Perhaps it's the company we keep, but our experience says people are clamoring for sustainable seafood - so we assume there's a standard for sustainably caught fish. Bill counters: "There is a booming demand but there's no federal regulation on sustainability or organic fish, per se. Sure, everyone uses the word 'sustainable' in their marketing - it's a chance to make a sale. Consumers need to be educated." 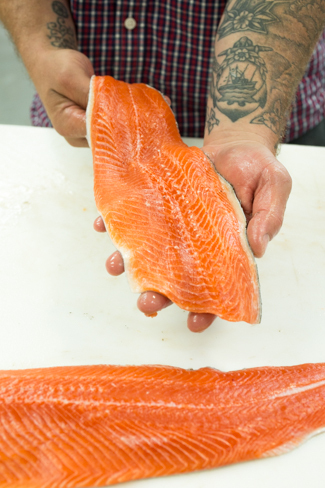 Where do you start? "First, you need to think about how the fish you're eating was caught or raised," Bill expounds. "If something is on a menu 365 days a year that's a huge red flag. How is that even possible? There isn't a species alive that can produce year-round in volume."

Kenny, the excitable, high-energy seafood Sherpa simply can't resist weighing in. "Unless it's caught fresh and then frozen, it's rare for something to be available all year. Squid freezes well, so you'll see it on menus a lot and that's okay. Yellow-fin tuna is a whole other story..."

The pair says they're "over-ethical" about their fish. "Everything is right there. We're upfront. There is no fibbing, and there are no lies." With McFarland Springs Trout, they're trying to create better food solutions and FISH - which began based on the belief that if we educate the consumer we can influence their decisions - is finally bringing it to the public," Bill rallies.

Ironically, one of the best tools the men say they have as restaurateurs, chefs, and seafood wholesalers is to say NO! "When a customer asks for fish we don't have (because it's not ethically harvested) it's our job to say 'let me explain why and tell you what we have that's comparable," Kenny clarifies. "Customers might get frustrated and even leave, but when they're driving home I know they're thinking about our catch method."

Kenny tells a story of a customer who came in for scallops. When he quoted the price -- $25 for a pound for 16 pieces -- she slammed her keys down on the counter and said, "Are they made of GOLD?" Kenny gibes: "I told her they're diver scallops, not day-boat scallops. She appreciated the opportunity to learn, then hosted an amazing dinner party with scallops she bought from us."

Two X Sea is clearly about environment before margin, but is that even doable? Bill is quick to respond. "Margins that have to expand, that's a flawed business model. We're making a small margin and saying 'that's good, that's enough' -- and we're proud of that. People might go somewhere else, but that's our mindset."

It's a mindset that garnered FISH the first restaurant endorsement from Monterey Bay Aquarium, a program that promises customers everything on its menu can be eaten with a clear conscience. There's even a Seafood Watch app for that. 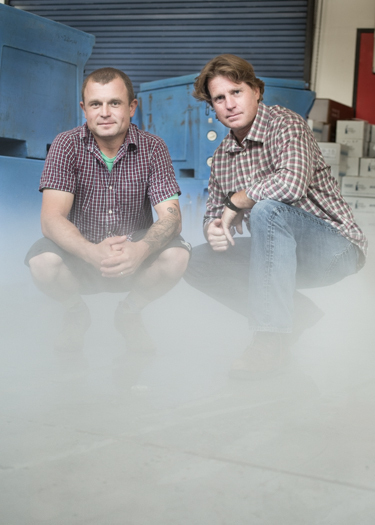 "Every fish from FISH or Two X Sea comes with a warranty, if you will," Kenny says. "Our business model is growing at a fantastic rate for the Bay area. We're always looking for more boats and more captains. We have boats in San Diego, Oregon, and Alaska and we're getting ready to open a second trout farm, but everything has to meet our standards - fair price and no bycatch."

"We're the eyes and ears and advocates for chefs. They trust us," Bill adds. "With every generation, every decade, we see a significant change in their mindset. I hope this younger generation of chefs and consumers creates a change."

What about those neighboring businesses? Kenny jumps back into the fray: "The choices they make don't bug me quite like they used to. We were told it couldn't be done, but we're doing it - -and now we're a household name in the Bay area. When I get to the end of the pier every morning I know we're growing faster than any other because we stuck to a set of morals and ethics."

I can't resist asking about my personal favorite, Ahi tuna. Kenny looks at me with a dash of disdain and a heaping helping of despair: "Most Ahi is caught on pelagic longlines - 40+ miles of floating line with baited hooks dangling every three feet. The lines catch tuna and everything else in the habitat, including tens of thousands of whales, dolphins, sharks, porpoises, seabirds, and sea turtles."

Alas, no more Ahi tuna unless it comes from Two X Sea. This formidable duo has us craving a cohesive, collective consciousness about fish because as Bill puts it: "We've been treating the ocean and the seemingly limitless supply of free fish as a given. If we don't have a backup solution, there's going to be a whole lot of hungry people." 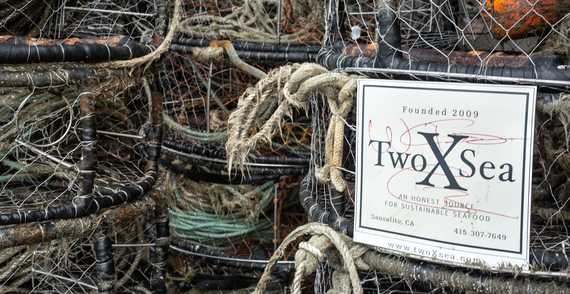