When my daughter Abrielle was 4-years-old, I enrolled both her and her 5-year-old sister Samara in a dance class called "Fit and Funky," a combination of jazz and hip hop class for the pre-school set. To me, it was a blessed 45 minutes where these two very active girls could get out some of their energy, and I could visit with my friends whose daughters also were taking the class. 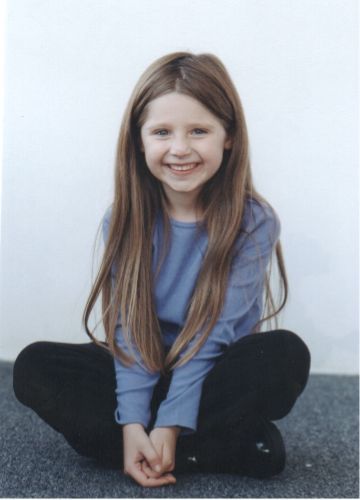 Each week, Abrielle would excitedly attend class only to proceed to stand in the middle of the dance room, unmoving, for the whole time. The teacher, who was lovely, patient and creative, did her best to include Abrielle in the class. But Aby would shyly shake her head no and continue to watch the class. At the end of the class, Abrielle would rush out of the room and give me a huge hug declaring "I wuv fitty funky."

At the end of the eight-week session, Samara was excited to re-enroll in the class. I suggested to Aby that maybe she should sit this session out. (You know, since she hadn't once moved a muscle in the whole two months she was there, it seemed like a fairly reasonable idea.) A shocked look passed across her little face as she screwed her tiny nose up and begin to sob, "But I wuv fitty funky!"

So I did what any self-respecting parent who was setting good boundaries with their kids would do: I gave in.

In part, I reasoned, it was 45 minutes of precious time I was able to chat with friends. As a stay-at-home mom of four girls under the age of five who only had help a couple hours a week, this was one of my "free" afternoons. That three quarters of an hour was supremely important to me, often being the only adult contact I would have for the day.

But I also saw how much this meant to my daughter -- she "wuved fitty funky" -- so I went with my gut and re-enrolled her.

I spoke to the adorable-and-somewhat-baffled-but-still-very-patient dance teacher who agreed to let Aby take the next series of classes, and off she went to session two of Fit and Funky.

The first four weeks of session two was the same story. Aby was as still as a post during the class but came out of the lesson proclaiming her undying love for her dance class.

If I were a less overwhelmed mother, I might have wondered if something was wrong with my child. But by this point I had lowered my standards of parenting success to "if they were all alive by the end of the day, relatively clean and having eating something that involved nutrition" I was a super star. Besides, she was 4-years-old; this is supposed to be about her enjoyment and her play, not some sort of pre-Broadway training ground.

Then, on the fifth week (or thirteenth week if you count session 1), something magical happened: Aby broke into dance.

And I am not talking about a little wiggle here or there, but full on, on-beat dance. At the end of the class, Aby came out just as happy as she had the previous weeks. I praised her participation and couldn't disguise my amazement. I blurted out, "Abrielle, why did you suddenly start to dance?" Chugging down her well-earned juice box, she paused for a moment and matter-of-factly answered: "I finally knew all the steps."

I finally knew all the steps. Well, all righty then.

For three months, this preschooler watched and observed and then she felt ready to dance. If her teacher wasn't so kind and patient, and if I hadn't been so willing to allow her to do the class (for somewhat selfish reasons, I acknowledge), we might not have discovered three very important things about my daughter: first, she learns by observation; second, she needs time to warm up to new situations and third, she loves to dance.

Ironically enough, Aby went on to dance for several more years, transitioning into rhythmic gymnastics (where she won a junior Olympic title) and then back to dance at a highly respected dance company in her middle school years. High school brought her heavily into musical theater, leading her to win two National Youth Theater awards as Best Actress in a Musical which involved singing, acting and yes, dancing. Upon graduation, she moved to New York City. After getting a semester of college under her belt, she took a leave from college to audition and take master classes, following her love of acting, singing and dancing. Aby is pursing her passion and her dreams and while that is terrifying to watch, it is exhilarating as well.

"Finally knowing all the steps" is still a need of Aby's. For as brave and passionate as she is about many different things, she still retains part of that 4-year-old who like to observe before jumping in.

Aby wasn't the only one who benefited from Fit and Funky; here is what I learned as well:

1. Give your kids time to let their passions and talents unfold. Don't be so quick to judge if the activity or sport is "their thing." Beware of concluding math is hard for your child because he struggles for a bit. And don't be hasty and forecast the likely outcome of their ultimate success. That 6-year-old kid who is a struggling beginning gymnast, might end up being a successful NCAA athlete.

2. Observe your kids to understand how they learn best. Some kids can jump into activities with little thought. Others need to step back and observe before participating. If your child is the latter, don't assume that means she isn't interested in participating. It might just mean she needs more time. If you are instructing a group of kids, try to assess how each child learns best. Some need to watch, others to have things explained verbally and others need to feel the action to understand best. Tailor your teaching to encompass all three kinds of learning.

3. Listen to your kids when they say they are enjoying something without judging what it is that they are getting out of it. Simply because the value isn't clear to you, doesn't mean it isn't to them. Allow them to dabble and to learn on their own terms. So what if they are not particularly gifted in an activity? If they like it, encourage them to develop their skills. You never know where it will lead them.

As Aby pursues her dream, I often think back to that little dance studio and wonder if I had responded differently, would Aby be where she is today? Would she have had all of the years of enjoyment and life lessons that come from pursuing something that she feels passion for and that is hard? Would she have had the confidence to express her desires of which activities she wanted to do? Would she have discovered her talents and passions?

Maybe the Fit and Funky experience wasn't as pivotal as I am suggesting it was.

Or maybe it was. That's one of the mysteries of parenting, teaching or coaching; you never really know which moments or events make an impact on a child's life.

More:
Parents quittingParenting dance class
Newsletter Sign Up
Raise the kind of person you'd like to know
Subscribe to our parenting newsletter.
Successfully Subscribed!
Realness delivered to your inbox

If You're Even A Little Bit Into Fall, You Need These 50 Things