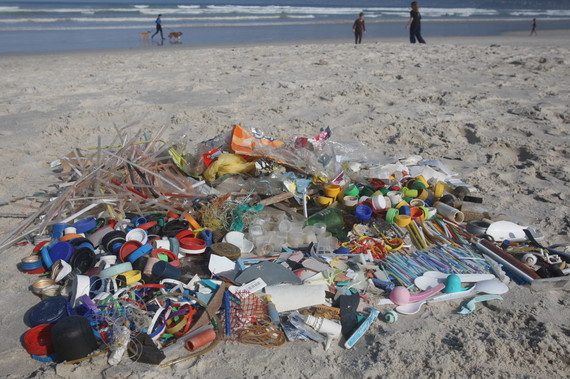 A recent media campaign has highlighted the many ways in which South Africa relies on plastics. One part of the campaign is a print advert "Plastics - part of your everyday life!" that chronicles how plastics are essential for a wide range of South Africans' daily activities. The tag line was that plastics

All true, except perhaps for the final point. If plastics really are safe for the environment, why did the top science journal Nature run an article by a group of leading researchers calling for them to be declared hazardous materials?

Two of the key properties of plastics that make them so central to our modern lives are their light weight and durability. This also makes them global pollutants when they are not disposed of correctly. South Africa fares particularly badly. A recent paper estimated that South Africa was the world's 11th worst offender when it comes to releasing plastic wastes into the sea.

South Africa even comes in ahead of heavyweight polluter India. This is due to a combination of two factors. A high per capita consumption of plastics - estimated at 2 kg per person per day, almost as much as the US - and a high proportion of solid waste not entering a formal disposal scheme, for example, being reused, recycled or at least disposed of safely in a long-term landfill site. An astonishing 56% of plastic waste ends up littering the environment in South Africa, compared to 11% in Brazil or 2% in the US.

Effective solutions are needed to stem the flood of waste plastic. These include creating greater awareness among consumers and providing incentives to promote reuse or recycling. One effective intervention would be to stop making some litter-prone items from plastic. Among the top offenders are: ear buds, bottle lids, plastic straws, individual sweet wrappers and expanded polystyrene food packaging. There are ready alternatives for some and clever design could do away with the rest.

Anything between 5 and 12 million tonnes of waste plastics enter the sea each year. Much of this floats and, given its very long lifespan in the sea, disperses across the planet. Floating litter accumulates in the centre of each ocean basin, where it is eaten by all manner of marine life including turtles, whales, seabirds and fish.

There is particular concern about the impact of microplastics on marine foodwebs because of their ubiquitous nature and potential to carry toxic substances. Microplastics are tiny pieces of plastic, ranging from a few microns to a few millimetres across that form when larger plastics are broken down by UV light.

When they drift at sea, plastic particles accumulate a cocktail of potentially toxic compounds that are released when consumed by marine organisms, affecting their predators, including humans. And denser plastic items sink to the seabed, where they block gas exchange, promoting the formation of anoxic sediments, devoid of oxygen, with severe implications for animals that live on the seabed.

Most marine litter is plastic packaging - single use applications that are particularly prone to inappropriate disposal.

Our survey of beach litter around South Africa in 2015, supported by Plastics SA, an industry sponsored body, found that 94% of litter on South African beaches is made of plastic. 77% of this is packaging. And the situation is not improving. The amount of litter washing up daily in Cape Town's Table Bay tripled from 1994 to 2011, far outstripping human population growth over this period.

Waste plastic has value. It can be recycled, burned to generate electricity or used to make fuel. The challenge is to establish efficient ways of harnessing that value. Appropriate incentives are needed to promote reuse and recycling.

The pricing of consumer products ignores their environmental costs - which in the case of plastic litter runs to hundreds of millions of rands annually just keeping South African beaches clean.

In Australia and the US, for example, much higher proportions of plastic bottles that carry a nominal refund are recycled, compared to those that don't. And getting people involved in recycling initiatives has wider environmental benefits.

Product substitution is another possibility. Although plastics are in fact the best product for the job - in terms of economic and environmental costs - for most applications, packaging design could be changed. Many packaging items are virtually impossible to recycle because they are made from multiple materials.

Replacing plastics may be warranted in some particularly high-risk products. Five applications that would be better served if they were not made from plastic include:

Of course, the problem lies not only with the plastics but also with plastic users' behaviour. Education is a priority. But education alone will not solve the problem. A multifaceted approach that uses direct incentives, legislation and education to change behaviour is needed. Charging for shopping bags greatly reduced the number of bags littering South Africa. Similar initiatives to reduce other highly litter-prone products are needed.