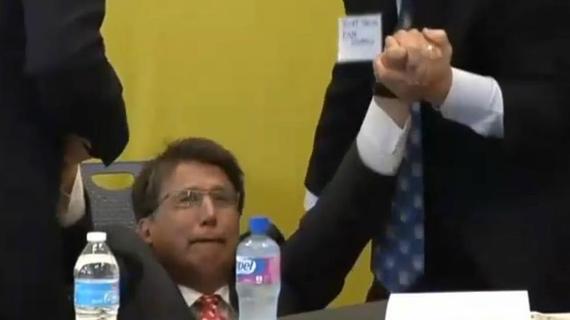 IF SOMEONE USES THE "WRONG" RESTROOM IN NORTH CAROLINA, POORLY-DRAFTED HB2 HAS NO ENFORCEMENT MECHANISM. THERE IS THEREFORE NO CONSERVATIVE OR LIBERAL REASON TO CONTINUE SUFFERING THE DAMAGE PAT MCCRORY HAS INFLICTED UPON NORTH CAROLINA. LET'S PLEASE END THE CARNAGE NOW.

As I've previously pointed out in McCrory's House Bill 2: A Brief Outline of its Five "Parts," only one part of that five-part bill is about bathrooms, and HB2 provides no remedy if anyone uses the "wrong" restroom. Thus, even people who believe in an imminent crisis of "wrong" restroom usage should want immediate repeal and replacement of HB2. They should want a more thoughtful bill that actually provides remedies for the supposed horrors. Furthermore, no reasonable person (conservative or liberal) wants to waste millions of dollars in legal fees (not to mention the awful continuing collateral damage to the state) to defend a bill that provides no remedy for "wrong" bathroom use to which they object. In the early aftermath of Pat McCrory's hasty signing of HB2, some projections of the potential damage to North Carolina's economy ran as high as five billion dollars per year. Though this might have seemed hyperbolic at the time, the current onslaught of such disasters as the loss of NCAA and ACC events on the heels of earlier losses make one wonder if such horrific projections are hyperbolic after all. Of course, such wondering is heightened by the vast and ever-growing damage to the State's reputation in the eyes of the entire world.

What are we to do in the face of this mess? Since HB2 currently provides no remedy when people use the "wrong" restroom, even the most socially-conservative voter should want the following: (a) an immediate repeal of HB2 that stops the ever-expanding damage to the state and (b) the holding of careful and extensive legislative hearings on whether a bathroom problem really exists and what if anything we should do about it. I predict any such real and unrushed investigations will lead to a better understanding of everyone's concerns and thus lead to more tolerance and unity. That will in turn make it harder for politicians like McCrory to wreak havoc on the state with future miscalculated social wedge issue politics. Since Republicans currently control both the executive and legislative branches of government, the future of this state depends upon conservatives admitting that they have been played by Pat McCrory and insisting that he clean up his act.

Unfortunately, we know now that McCrory will very likely fight back even with the conservative constituents he claims to represent. He has dissembled for so long on his "bathroom bill" that he will likely see any change in position as tantamount to conceding his race for re-election. Additionally, McCrory has real problems accepting responsibility for his own mistakes and tends to lash out at others when he makes mistakes (even inanimate objects such as chairs). Furthermore, the powerful special interests who pushed the attack on workers under the guise of a bathroom bill are not going to want to see these attacks undone by a repeal of HB2.

Though I have faith that conservatives are good people and will rise to this challenge, fixing HB2 will therefore be a tall order as long as McCrory is in power. The tenacious Lake Norman Republicans fighting McCrory over what he has done to them with his I-77 Spanish company "market rate" toll contract know what I mean. Let's not be daunted however. Real North Carolinians embrace our great state motto: Esse quam videri--to be rather than to seem. Let's give the Ohio-born McCrory a lesson in what that motto means to North Carolinians. Let's evict him from the executive mansion in Raleigh if he can't grasp how seriously we embrace truth over deception, over sham, and over false virtue. Let's also remember: POORLY-DRAFTED HB2 HAS NO ENFORCEMENT MECHANISM IF SOMEONE USES THE "WRONG" RESTROOM. THERE IS THEREFORE NO CONSERVATIVE OR LIBERAL REASON TO CONTINUE SUFFERING THE DAMAGE FROM HB2 PAT MCCRORY HAS INFLICTED UPON NORTH CAROLINA. LET'S PLEASE END THE CARNAGE NOW.