Last week at MIT we hosted a group of leaders and change makers from Indonesia. With its 17,000 islands and 250 million inhabitants, Indonesia is the third largest democracy and the biggest Muslim country in the world. Several members of the visiting group are key players in CTI, the Coral Triangle Initiative, a multi-stakeholder initiative focusing on sustainable fisheries and marine stewardship in the world's second most important biodiversity region (second only to the Amazon region).

The MIT IDEAS program, which they embarked on last week, is a 15-month journey of profound individual and institutional innovation and change. All participants remain in their existing jobs and organizations, but over the next 15 months they will meet regularly in small coaching circles, as well as in five whole-group workshops for 3-5 days each, progressing on a journey from total immersion to e deep reflection and learning by doing.

We also provided them with deep reflection practices to help being receptive not only to the new ideas that emerged from the MIT eco-system but also to the new ideas that are emerging from within: who they are now, and who they want to be going forward. Many found it to be a profound, moving, and in some cases even life-changing experience. As one of them said on the final day: I have been born twice. The first time in Indonesia, the second time here in Boston. He explained that he felt he had come closer to his deepest human capacity to create.

One half-day workshop during the middle of the week offered them a window onto the current conditions and changes that we deal with in just about every larger process of systems change on the planet. Picture this: they entered the workshop room at 8.30 a.m. and saw that the room was set with six tables, one each for the U.S. delegation, the EU, other developed countries, China, India, and other developing countries. They were greeted by the facilitator, a person playing the role of Ban Ki-Moon, Secretary General (SG) of the UN.

The SG welcomed the delegates and asked them to take seats at their respective tables (each participant had been assigned to one of the teams and had received a country briefing the night before). Then he provided the delegates with an update on the urgent current situation related to global climate change. He gave each delegation half an hour to develop a proposal for addressing the pressing climate challenges, in order to mitigate and perhaps halt the crisis by the year 2100. Each delegation was asked to present binding commitments its country or region would make on the following variables:

The delegates quickly realized that they were not all equal. While the tables of the delegations from the U.S., the EU, and other OECD countries were set with delicious food, China and India had no food on their tables. The delegates from "other developing countries" were even asked to sit on the floor, with their chairs and a table being removed (see team pictures below). 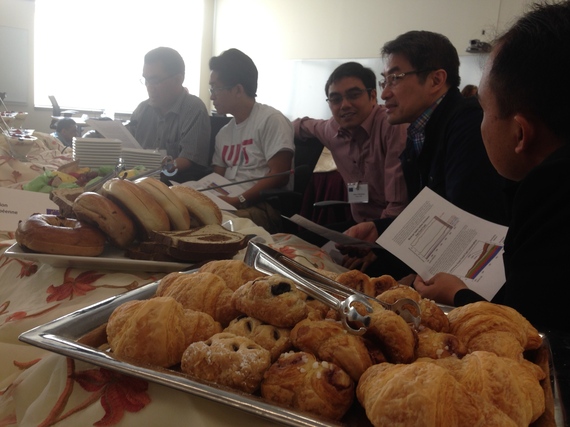 Picture 1: The U.S. delegation's table, with lots of food. 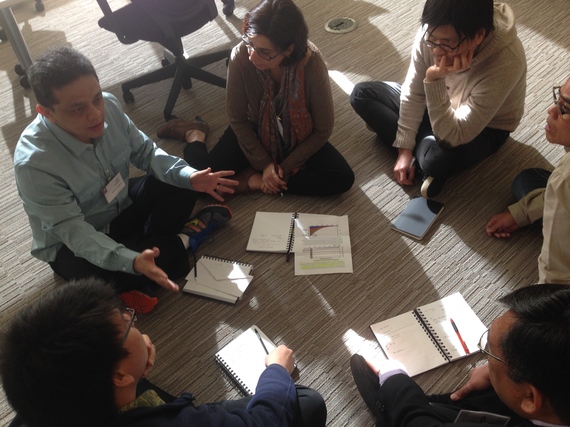 Picture 2: The least-developed countries' space: no table, no food.

After heated negotiations, each team presented its proposal. SG Ban Ki-Moon, a.k.a. Prof. John Sterman, input each delegation's recommendations into a science-based simulation model that he and his MIT team developed and that is being used by various actual delegations to train their negotiators (including the U.S. and the Chinese delegations). He ran the model and presented the results. Although each team had stretched itself to make compromises and painful choices, the results projected for the year 2100 were nothing short of catastrophic: massive climate destabilization, catastrophic sea-level rises, ocean acidification, and temperature changes that would destabilize societies on a scale never before seen. What really hit home for the delegates was a map that showed how the projected sea-level rise that resulted from their decisions would devastate their home countries and cities (picture 3).

Then the SG asked the delegates to rework their commitments in a second round of negotiations. But first he gave them a tutorial on visualizing the potential impact for each region in the year 2100.

Having seen the results of their collective decision-making in round 1, in round 2 the delegates developed commitments of a whole different order of magnitude. They were much more courageous, collaborative, and determined. But still, the projected scenario for 2100 was devastating, although no longer as catastrophic as the round 1 scenario. It took a full third round for them to come up with an almost-final set of commitments and decisions, which, according to the model, would result in a scenario that was close to being acceptable. 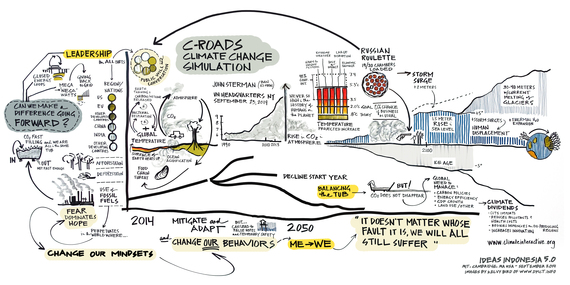 Having seen this process a number of times with different groups, I would make a few observations:

1. The behavior we saw in round 1 is exactly the same as what we have seen from our actual delegations in most international negotiations on climate change over the past decade.

2. Note that the delegates in our simulation game were well-informed (for example, they all watched a "disruption video" before beginning their work) and well-intentioned. Yet, as a group, they acted just as dysfunctionally as our politicians do.

4. The big question on the table in almost every real-world case of large systems change is how to make that shift. What happened in that half-day climate simulation game is often missing on the larger, real-world scene.

5. Five conditions are required to shift the center of gravity in a system from ego to eco:

i. A container: You need to bring all key stakeholders together in a single room, and then create a container--that is, a holding space--in which they can interact and learn with each other.

ii. Science: You need good science in order to let the data talk to you--that is, in order to get beyond everyone's currently favored opinion.

iii. Dialogue: You need to close the feedback loop between collective action and awareness; you need to make the system see itself (which is the essence of dialogue).

iv. Aesthetics. The origin of the term aesthetics lies in the Greek word aisthesis, which means perception through the senses. In the workshop, it was key to feel the impact of sea-level rise through the map visualization, the oversupply and non-supply of food to the delegate tables, and other inequities. 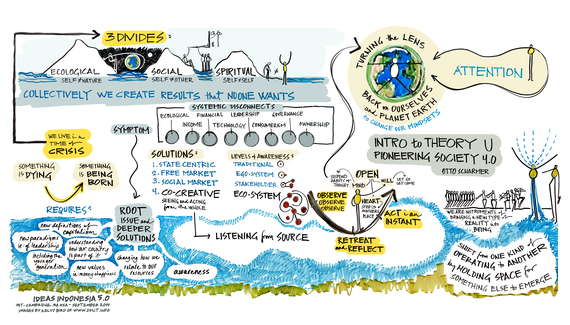 Picture 5: The Iceberg Model: Turning the Lens Back onto Ourselves, graphic created by Kelvy Bird

The above graphic drawn by my colleague Kelvy Bird depicts this basic point on the upper right: turning the lens back on ourselves and planet earth. It captures the ecological, social, and spiritual divides above the iceberg's waterline, and all the deeper root issues and sources below the waterline.

What does it take to address the current crises of our time at the level of the source (as opposed to the level of the symptoms)? What it takes, we believe, is a journey--a journey on which the social field shifts from ego-system awareness (silo view) to eco-system awareness (seeing from the whole). That was the shift the Indonesian participants made in the climate change workshop--and in other key experiences during the week. It was that shift that resonated most deeply within their own beings, with who they wanted to be. It's that shift that they will be able to prototype in the context of their own systems throughout their action learning projects in 2015. 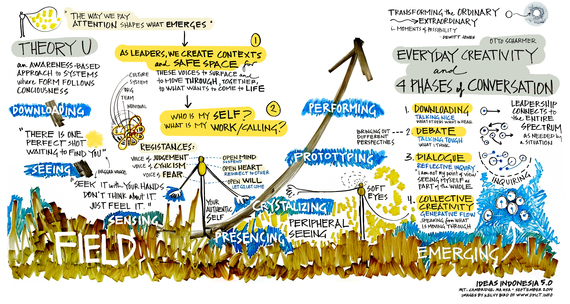 How can we create these five conditions not only in small workshops, but in society as a whole? How can we reframe our public conversation on climate change by putting these conditions in place? Where have you seen similar shifts? And what conditions did you see that enabled such shifts to occur?

Here are a few links to the climate change simulation model that you can use free of charge: For World Climate For World Energy 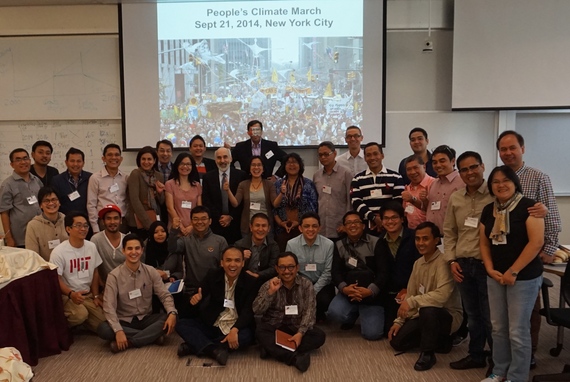