So you're a senior. Congratulations on making it through the Hunger Games that is the first three years of college. It's a big deal to make it this far. And because it's a big deal, it's also anxiety-inducing, liberating, fulfilling, depressing, and fabulous all wrapped into one. I, for one, spent my senior year teetering between peeing my pants out of fear of the future and peeing my pants out of excitement for graduation. This is normal. 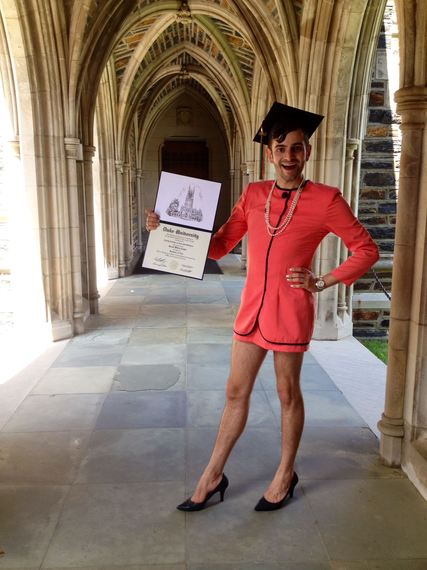 As an activist, I'm a big fan of trying to institutionalize knowledge, and in the interest of doing so, I want to pass along a bit of advice about life. Because I'm a recent graduate, the triumphs and tribulations of senior year are still fresh in my mind, and with all the infinite wisdom that is conferred upon me by three months out of college, it's a big deal that I'm passing along my sage advice to you. You should definitely cherish all of this advice, because I have a college degree, and you don't yet, so trust me when I say that I know best.

So without any further fanfare, I present to you the five dos and don'ts of senior year.

During senior year recruiters for major corporations, graduate programs, and other opportunities will be swarming campus trying to scoop up fantastic young talent. For some of your friends, these paths will be the right ones to choose. Others will be tempted to put aside their convictions and passions and pursue opportunities simply for a salary. When your friends are facing these sorts of decisions, it can be hard to be honest with them about the implications of the choices they're making, but true friends hold each other accountable. It may be tough, but you need to confront your friends when they're thinking of signing up for a postgraduate opportunity without some critical thought about whether it's really the right fit and will make them truly happy.

Write a thesis (if you can bear it).

Writing a thesis isn't glamorous, and at times it's ridiculous -- like, super ridiculous. I wrote a history thesis, and my thesis was 180-plus pages. Like, what? Why would anyone ever want to cite 400 footnotes? Because despite the tediousness of it, you will grow more intellectually and personally than you ever thought possible. Writing a thesis gives you the chance to produce an original project that is yours. It will push you to put down your ideas, your words and your thoughts. Yes, it will make your brain hurt, but the mental marathon will be totally worth it in the end. (Also, you'll get like a million "likes" when you post a picture of the finished product on Facebook at the end of the year.)

Think about the future, but don't try to control it.

You can think about the future during your last year in school, but unless you're going into a graduate program or a job in finance immediately following graduation, you will very rarely be able to do anything about your future until after you graduate. The reality of most jobs in the United States is that you just have to move to the city where you want to live and try to find a job after you get there. While looking for a job, you may have to live with your parents for a while or perhaps crash on a friend's couch, but there is nothing that you can do about that at the beginning of your senior year. So think about the future, but remember that most people will not be able to plan all the steps necessary to secure it.

Feel all of your feelings.

During your senior year most people will pretend that they are infinitely happy and have their whole life plan together. But almost everyone is freaking out and has no idea what they're going to do next year. By being honest about your feelings, not only will you preserve your emotional health, but you'll also make hella friends. During senior year people gravitate to anyone who is willing to acknowledge that they're still figuring things out. Vulnerability and authenticity will likely make you the most-popular person on campus.

By the time senior year rolls around, school may have gotten pretty exhausting, and you may begin to think you know everything there is to know. This may lead you to not take your classes and learning seriously, but that would be a huge mistake. Once you get an undergraduate degree, there are few other times in your life when you'll have the opportunity to take a class out of curiosity. So learn how to edit documentary film, take a ballet class, or try your hand at astronomy. Other than fulfilling your course requirements, try to take classes that are outside your comfort zone and push you to learn something entirely new. Senior year may be one of the last chances you get to do so.

Yeah, you're a senior, and you've been working hard on things for a whopping three years, but this does not entitle you to be jaded. Being jaded at the age of 21 or 22 isn't sexy and will make for a terrible senior year. You do not have my permission to be jaded until you are at least 78. If Edie Windsor can keep fighting, so can you. Capeesh?

Don't let your parents pressure you into anything.

They're right sometimes, and their advice is fine and all, but if you had really listened to your parents, you probably wouldn't have come out as queer in the first place. As queer people we know in our bones that our parents aren't always right. You have to chart your future, and during senior year it is more important than ever to claim that.

Selling out can be a touchy subject during senior year. I define "selling out" in the following way: Selling out is taking a job that you know to be morally objectionable because it pays you a lot of money. So if a missile company asks you to come work for them, you should probably say no. It will feel weird to do this, and it is not easy to turn down an $80,000-a-year salary right out of college, but I think that history has proven over and over that money does not buy happiness. You owe it to yourself to do something with your life that makes the lives of others better.

Don't live for the future.

I think I wasted at least 25 percent of my senior year worrying about getting a job. That was just plain silly, and now that you're reading this, you are no longer allowed to make the same mistake. If you find yourself panicking about a job or graduate program, try taking a nap, going on a run, or going to a party instead. It will be a much better use of your time. If you waste your senior year stuck in the future, you'll never get that year back -- at least until we discover how to travel back in time. And when we do figure out how to travel back in time, I'm calling first dibs on the time machine.

So that's it! If you follow these simple do's and don'ts, your senior year is destined to be amazing, and all your dreams will come true.

With love and infinite wisdom,
Jacob

This piece was reposted from the Point Foundation Scholarship's Blog "ViewPoint". The Point Foundation Scholarship empowers promising lesbian, gay, bisexual transgender, and queer students to achieve their full academic and leadership potential -- despite the obstacles often put before them -- to make a significant impact on society. To see the original entry, click here.