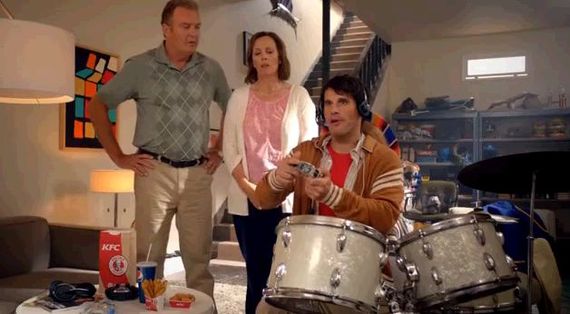 "It's not your fault." Remember that crock-of-shit line from Good Will Hunting? We all know that Will Hunting was most likely an asshole kid, one who probably tormented the family pet and drew on the walls in every house he lived in. I care more about my dog than I do humans, so I'd toss him to the next foster family too. The brilliant Robin Williams' Sean Maguire was a sweetheart of a friend, but he was just telling Will what he wanted to hear.

You're a 30-year-old that has a decent full-time job, and is still sleeping in your Pearl Jam poster-covered room in your parents' house. We both know it's your fault -- but I'm going to strap on my Sean Maguire beard and glasses and help you navigate around those judgement-inducing question landmines of "So, where do you live?"

All you have to do is follow this guide of lies, excuses and blaming others, and no one will ever know that you're a lazy child that bitches at his mother for buying the wrong kind of cereal.

I was actually about to close on an apartment, but I'm helping my parents with the bills and mortgage, so I'm putting everything on hold for now, for them.

What You Need To Make Yourself Believe: Your parents have been holding you back your whole life, and it's time the world knew. Remember when you were put in remedial math in high school? Mom and dad's fault. Now we're at the tip of the iceberg. They're destroying your adult life, so it's only fair that you tell your colleagues that the people who gave you life are deadbeats on the brink of bankruptcy -- and you're the one holding it all together.

Ugh, I've been trying to move out forever, but I just don't make enough. With the way the market is, and having to pay off my college and car loans, not to mention my cell phone bill, it just doesn't make fiscal sense. I'm actually scheduling a meeting with [insert boss' name] to talk about a raise, so once that's done, I'll finally have a chance to start looking.

Lie, Lie, Lie Your parents paid off your school loans five years ago, and you bought a Lexus you couldn't afford instead of buying a Honda Civic and using the rest of the money on a studio apartment. The phone bill problem is real, but only because you got the lowest data package and your Tinder addiction keeps putting you over your limit. Your co-workers don't need to know any of this. Oh, and you're never having that meeting with your boss.

I was just about to close on a two-bedroom with my buddy, but my friend bailed last minute, so I have to start from scratch.

Ruin Your Friend's Rep: Your friend is such a flake. Make sure to drive that home with whoever you are giving this excuse to. They don't deserve to be respected after what they've done to you. You were just about to experience independence (maybe finally get a girlfriend?!), but no -- your pal only gives one shit, and it's about themselves.

Blame Your Job And Your Friends

I love what I do, but I just don't make enough money to live on my own. I need a roommate, but with most of my friends engaged or married, it's pretty slim pickings to find a good roomie -- and there is NO WAY I'd go the Craigslist route.

The Double Deception: If you love what you do, you'll never work a day in your life. Amiright?! Money doesn't buy happiness, so why look for a better-paying job that allows you to afford your own place? And how dare your friends move on with their lives and build families. Assholes. The Craigslist thing is legit, though -- don't do that.

Blame The World For Being So Needy

It doesn't make sense to invest in a house or waste money on an apartment right now, because I applied to the Peace Corps nine years ago, you know, because like there are so many people in Africa that need help. I'm just trying to do my part in civilization, and they're going to call shortly, so I have to be ready, and I'm like, so excited.

You're Mother Theresa: You are a saint. You'd give a homeless person your only venti caramel latte that you bought with the Starbucks gift card you got from Grandma for Hanukkah. Be sure to kick off this reply addressing the initial lack of apartment/house, and then fill in the bulk with the Peace Corps fluff. By the time you're done rambling, your coworker won't even remember what the hell they asked you about.

Remember, you're an absolute disappointment to your immediate family -- but these excuses will work perfectly for all your friends, relatives, and co-workers if you just believe hard enough!