The paper that White references compares the cost of fixing Social Security now as opposed to if we wait. It shows how much benefits would need to be reduced now, or revenues would need to be increased, to restore Social Security solvency, compared to the changes that would be required in ten or twenty years from now. The paper in no way advocates an across-the-board cut in benefits (or an across-the-board increase in the payroll tax) as the way to restore solvency, but simply provides estimates to illustrate how the magnitude of changes required will increase if we delay acting. 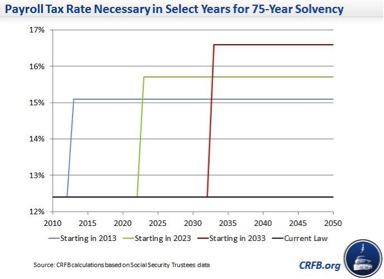 While CRFB has not endorsed a specific Social Security reform plan, we have commented favorably on a variety of plans which rely on a mix of reductions in promised benefits, increased revenues and targeted benefit enhancements. We have also developed an online tool, the Social Security Reformer, which allows individuals to view the options for changes in benefits and revenues and design their own plan to restore solvency.

1. Benefits will be cut by over 23% within the next twenty years if no changes are made. The Social Security system is already running cash shortfalls, which are projected to exhaust the trust fund by 2031 (according to the Congressional Budget Office) or 2033 (according to the Social Security Trustees). At that point, the benefits Social Security would be legally able to pay would be limited to the revenues coming into the program, which would only be sufficient to pay approximately 77 percent of promised benefits. The 23% cut in benefits would apply to all beneficiaries, including those already receiving benefits and low income seniors with benefits at or below the poverty level. 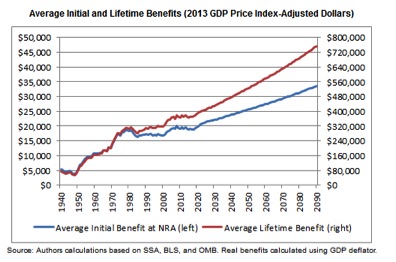 3. The Social Security shortfall cannot be closed solely through increased taxes on upper income taxpayers. Contrary to the assertion being made by some progressives that the problems facing Social Security can be solved simply by eliminating the cap on taxable wages, the Social Security actuaries estimate that eliminating the cap would close about 70 percent of the program's 75-year shortfall and only about 33 percent of the gap in the 75th year. A proposal from Senator Tom Harkin that would also increase benefits across-the-board would solve even less: closing only half of the 75-year shortfall and 20 percent of the gap in the 75th year. 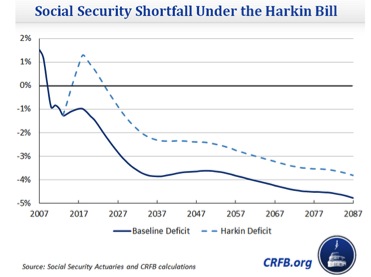 Under the current structure of the system, a portion of the increased revenues raised from wealthier taxpayers by eliminating the wage cap would go to finance higher benefits for these same wealthy individuals when they retire. The amount of the shortfall that would be closed would be somewhat greater - roughly 86% -- if the wages above the current cap were not credited toward benefits. However, breaking any link between higher contributions and higher benefits would represent a fundamental change in the social insurance nature of the program that causes concern among many supporters of social insurance who believe that the link between contributions and benefits is a key feature of the program.

Eliminating the taxable maximum entirely would also make it harder economically and politically to enact further tax increases on upper income taxpayers to meet other needs. Relying on elimination of the taxable maximum to restore Social Security solvency represents a judgment that preserving 100% of promised benefits under Social Security for everyone, including wealthy retirees, is a greater priority than other possible uses of the additional revenues from upper income taxpayers that would be generated by eliminating the taxable maximum.

4. Delaying action will make the options for restoring solvency more painful Not only does waiting to act mean any tax increases or benefit cuts will be steeper, it literally means they will need to be bigger. A shortfall which could be solved with a 16.5 percent across-the-board benefit cut or 2.7 percentage point increase in the payroll tax today would require a 19 percent cut in benefits or 3.3 percentage point increase in payroll tax if we wait a decade to act. This is true for at least two reasons. First, waiting will mean that there are fewer total people to share in the tax increases or spending cuts - that means more increases/cuts per person. Secondly, the longer we wait, the less money is in the trust fund and the less interest it will generate. Ironically, the actions of those who resist efforts to reform Social Security by downplaying the magnitude of the problem and the need for action to address the shortfalls now will actually lead to deeper cuts in benefits for all beneficiaries and/or greater increases in payroll taxes for workers than would otherwise be the case.

5. The major Social Security plans that rely on a combination of benefit changes and increased revenues to restore solvency include targeted benefit enhancements for vulnerable populations at greatest risk of poverty The Social Security reform proposals in the Simpson-Bowles and Domenici-Rivlin plans include an increase in the minimum benefit that would enhance benefits for low-income workers and a progressive benefit bump up in benefits for the very old and long-term disabled most at risk of outliving their retirement savings. These provisions would provide greater poverty protections than current law. 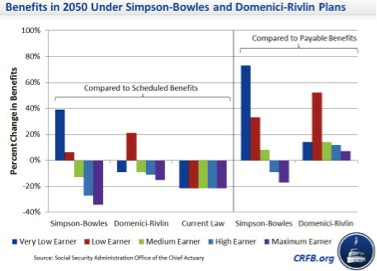 Earlier plans to restore Social Security solvency such as the plan proposed by CRFB President Maya MacGuineas along with Jeff Liebman and Andrew Samwick and the legislation introduced by CRFB board members Charlie Stenholm and Jim Kolbe had similar benefit enhancements for low-income populations. Providing benefit enhancements targeted at those most at risk of poverty is a much better use of limited resources than an across-the-board increase in benefits for all retirees, including wealthy seniors, as the legislation introduced by Senator Tom Harkin would do.

The future of the Social Security program is a serious issue that deserves a serious debate that honestly acknowledges the challenges facing the program and trade-offs involved in addressing the problem. Absolutist positions ruling out options before even considering them does a disservice to the debate.

Ed Lorenzen is a Senior Advisor to the Committee for a Responsible Federal Budget, a bipartisan, non-profit organization committed to educating the public about issues that have significant fiscal policy impact. The Committee is made up of some of the nation's leading budget experts including many of the past Chairmen and Directors of the Budget Committees, the Congressional Budget Office, the Office of Management and Budget, the Government Accountability Office, and the Federal Reserve Board.