Golf has gone through its own market correction; from the boom-boom development days to finding its current place as a critical real estate sector component, a social past time and a global sport. A clear message originating from recent success stories is that distinguishing yourself from traditional golf clubs is a formula for growth. Given the economic and demographic shifts in the U.S. many clubs discovered they needed to truly understand their potential members by evaluating demographics in relation to the physical geography of the club.

Many golf clubs and golf ventures have found success once they were able to find their own distinct voice and style. Sometimes this is through membership alternatives, or amenities like swimming pools, tennis courts, fitness studios and sometimes family friendly options including child care. In other cases it was through innovation, technology and listening to the consumer by adapting some fun alternative twists on the game. The National Golf Foundation 2015 Industry Overview report states; "NGF is currently tracking 123.5 (18 HEQs) U.S. golf course projects where ground has already been broken. Of these, 82.5 are renovations or additions to current facilities, leaving 41 new courses under construction."

Most golfers and now non golfers have heard or experienced the buzz of Topgolf. This multi-tiered driving range with TVs, cocktails and games has taken golf to a new entertainment level. These venues have experienced unprecedented growth with 15 current locations and 10 coming soon. While there is no data available yet to determine if Topgolf will lead people to play traditional golf, here are five other success stories that directly prove interest and growth in the game. 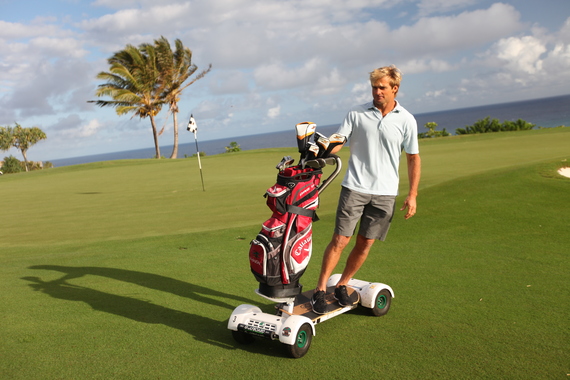 The Bay Club, an Audubon Sanctuary, is set on 625-acres of forested land on the South Coast of Massachusetts. It offers members an extraordinary Brad Faxon championship golf course and a multitude of sports and activities for every season. It was originally intended to be a private club combined with a housing real estate play. However it became a victim of the 2007 real estate slow down. The bank was ready to foreclose when the members formed an LLC and board and started dealing with the bank directly to buy out the club from the developer. Overtime they weathered the economic downturn and turned the club around by creating varying membership programs. Overall they have had a 15% increase in membership. A great reason for their success is that the Bay Club is defined by its diverse members and cared for by top professionals.

The historic Shackamaxon Country Club opened in 1916 and nearly a century later it was purchased by RDC Golf Group. The Shackamaxon golf course, an 18-Hole championship course, was designed by famed golf course architect Albert W. Tillinghast, who also designed Baltusrol, Bethpage Black, Winged Foot, and Quaker Ridge. The ninth hole at Shackamaxon has always received notoriety as one of the first island greens in the United States and was voted one of the most intimidating holes in the New York metropolitan area. As part of the club enhancements to bring this club to its former glory and success the RDC Group completed a full golf course bunker restoration. Additionally they added a new resort style pool complete with a walk up/swim up bar and refurbished its elegant ballroom and opened its venue to the public for catered affairs and special events. Shackamaxon is experiencing an exciting renaissance with full golf memberships growing from 117 in 2012 to over 325 in 2015, and social memberships more than doubling during that time. "After acquiring this historic country club, we lowered the dues and invested in the course and club facilities," said Christopher Schiavone, co-owner of Shackamaxon Country Club and Chief Executive Officer of RDC. "With an emphasis on value to the member and creating a welcoming environment for new members, their families and their guests, we have seen unprecedented membership growth in this still-struggling economy. We believe we offer the best club and service for the money in our area and the success of Shackamaxon supports that."

Alpine was founded in 1962 and is a private club set on 210 acres of land in western Cranston, Rhode Island. Troon Prive᷄ came on board in May of 2014 as Alpine was struggling to gain new members because of a lack of differentiation in the market place. Troon, along with the board, suggested a $750,000 investment into renovations of their facility including upgrading the dining rooms, locker rooms and pool area as well as a new pub and state of the art sports entertainment center. In addition to the physical changes the club is now managed by Troon Prive᷄ giving the members access to other Troon courses worldwide. The Alpine Country Club was founded on values which were stated on the first sign to be at the entrance of the Club: "The peak of enjoyment for the entire family". This has become even more relevant as people are starting families later in life and looking for social outlets. With over 350 family memberships they are enjoying healthy growth. Since March 2015 they have had 60 new families join.

GolfBoard, co-founded by surfer Laird Hamilton, has become an amenity enhancer to golf courses. This motorized skateboard enables golfers to be more active than using a cart and move faster than walking. It is designed for one individual with the golf clubs on the front of the vehicle adding a new level fun and excitement for golfers enabling the golfer to "Surf the Earth" in a way that feels similar to snowboarding, surfing, or skateboarding. "This is a more physically and mentally challenging way to play golf. It is more fun for the players, more revenue and faster rounds for the course owner and less wear and tear on the course than a cart" says President, Jeff Dowell. GolfBoard was awarded the Best New Product at PGA Merchandise Show in 2014. Blackrock in Hingham, MA and the Westin Kierland Resort & Spa, Scottsdale AZ are two of the over 500 courses using the GolfBoard in the USA.

GolfTec is another company that has seen increased growth in the golf sector. Over the past five years they have experienced a 73% increase in revenue and 51 new locations in the US resulting in a total of 200 locations worldwide. GolfTec has become the leading provider of golf lessons with more than 5.7 million lessons given and the number one employer of PGA professionals in the world. Joe Assell, President and CEO, attributes the success to innovation saying: "GolfTec became the largest in the world because we innovate and we have made the teaching process convenient, fast and combined that with sophisticated technology". The numbers do not lie and they have plenty of them as 427,979 improved golfers have gone through GolfTec including 52,000 women. They have a 96% success rate with a player on average lowering their score by seven strokes. With technology driving most innovation they have found their sweet spot in convenient golf instruction. They partnered with Golfsmith and are in 82 store locations and see the overall potential market penetration reaching 400 sites in total with 350 locations in the US and 50 in international markets.