A decade after the fall of Saigon, President Nixon wrote, "[n]o event in American history is more misunderstood than the Vietnam War." A generation and a half later, this remains true. Yet what lessons should we draw from our nation's first major defeat?

1. Vietnam Sought Liberation from a Colonial Power. In the first sentence of Vietnam's Declaration of Independence, Ho Chi Minh quotes from our own Declaration of Independence that all men were endowed with "certain inalienable rights, among these are Life, Liberty and the pursuit of Happiness." The declaration then detailed how the French have denied them of "every democratic liberty," while impoverishing the Vietnamese people.

President Roosevelt, a fierce anti-colonialist, had supported establishing an international protectorate over Vietnam rather than returning it to French control. Ho Chi Minh telegrammed President Truman to urge him to support Vietnamese independence, but Truman sided with the French.

After negotiations with the French failed, Ho Chi Minh issued his famous warning to the French that "[y]ou will kill ten of us, we will kill one of you, but in the end, you will tire of it first." This was their country, the Vietnamese had nowhere else to go and would fight as long as necessary -- just as we had. Yet we ignored this warning.

2. South Vietnam Was Weak. After the defeat of the French at Dien Bien Phu, Vietnam was partitioned into North and South under the Geneva Accords which also called for nationwide elections in 1956. The elections were postponed and never held since the United States feared that Ho Chi Minh might win as much as 80 percent. 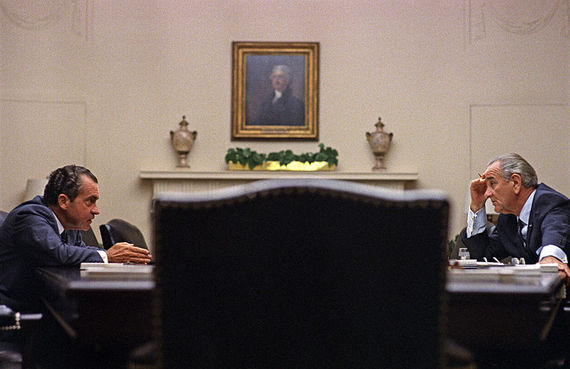 3. Candidate Nixon Sabotaged Peace Talks. In October 1968, the North Vietnamese offered concessions that would enable peace talks to begin and permit President Johnson to halt bombing of North Vietnam. Presidential candidate Nixon dispatched a campaign advisor to urge the South Vietnamese government to withdraw from any talks and refuse to deal with Johnson since they would get a better deal under Nixon. Days before the election, President Thieu announced he would not agree to terms proposed for negotiations.

Over one-third of all U.S. combat deaths in Vietnam occurred after Nixon's election. It is now believed that the Watergate break-in was partly motivated by a desire of President Nixon to obtain files linking him to the plot in light of the release of the Pentagon Papers. Like Lady Macbeth, Nixon was consumed by the indelible stain which gave birth to his presidency.

4. We Couldn't Have Won. A longstanding myth about Vietnam is that the United States could have "won" in Vietnam but for meddling politicians. The fact is that the United States deployed 3.4 million soldiers in Southeast Asia; dropped four times as many bombs as during all of World War II on nearly 70 percent of Vietnam's villages; sprayed millions of gallons of chemicals to deforest large sections of the country; at a cost of nearly $500 billion in current dollars and over 200,000 Americans killed or injured only to reach a stalemate in a war that was not vital to our national interests.

In addition, not only was the war not vital to our interests, but with reports of atrocities such as the Mai Lai Massacre, the war was inflicting serious damage to the nation's global prestige.

Those who say we weren't allowed to "win" never say how many more soldiers would have been deployed, bombs dropped, dollars spent or soldiers killed to achieve a "victory" in a war both Presidents Johnson and Nixon concluded was unwinnable; nor do they ever address what "winning" means in military or political terms for the weak and corrupt South Vietnamese government.

Dr. Jeffrey Record of the Army War College concluded that "the only way the United States could have avoided defeat in Vietnam was by staying out of the war altogether" given the "the absence of a legitimate and competent South Vietnamese political authority". Any so-called victory would require a permanent occupation of Vietnam, something which American voters would not abide.

5. The War is Still With Us. While we cannot reverse what happened on the battlefields in Hue and Khe Sahn, we can still win the war at home for the millions of veterans. Consider that the number of homeless Vietnam veterans today exceeds the death total during the war or that the number of Vietnam veterans suffering from PTSD is greater than the population of Buffalo; that is a battle we can and should win. As President Kennedy said, "[as] we express our gratitude, we must never forget that the highest appreciation is not to utter words, but to live by them."