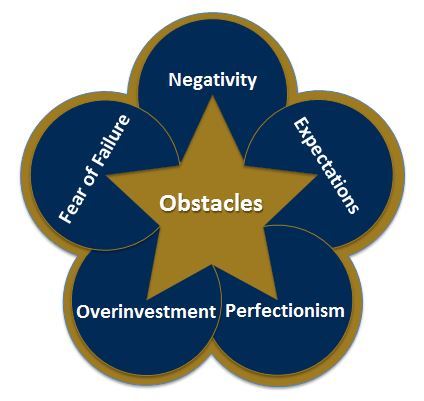 In my last post, I introduced you to my Prime Performance System that is comprised of the five essential mental areas that most influence athletic performance. In that post, I described the first of the five mental areas -- attitudes.

In this post, I will explore the second of these mental areas, namely, obstacles, and their make-or-break role in how athletes perform (or rather how they don't perform) when it matters most and what is often at the heart of failures they experience on the field of play.

Mental obstacles refer to any psychological or emotional issue that interferes with your ability to perform your best consistently in the biggest competitions of your life. All of the mental tools in the world that you use in practice and competitions won't help you achieve your athletic goals if you don't have the attitudes in place (as I described last week) that prepare you for success and you have removed the obstacles that set you up for failure. It's one thing to have the capabilities to move forward, physically, technically, tactically, and mentally. It's an entirely different thing to have psychological and emotional anchors that weigh you down and keep you from moving forward with confidence and determination.

Let me introduce you to the five obstacles that I believe can hold you back the most in your sports efforts.

You, of course, want to be invested in your sport. You want to care a lot about our sport and it should be an important part of your life. With this deep commitment, you will give your best effort, respond positively to setbacks, and persevere in the face of the inevitable challenges of pursuing your own personal greatness as a athlete.

But that investment crosses over into the 'too zone' in your sport when you care too much, it is too important to you, and your sport becomes too much a part of who you are. The result is that you aren't going to see the returns you would like on that investment. In fact, your overinvestment may actually cost you psychologically and emotionally.

This overinvestment in your sport results in every competition becoming a life-or-death situation where your physical life isn't threatened, but rather you are putting your self-identity, self-esteem, and goals on the line. This overinvestment causes a preoccupation with results (especially failure!), expectations, and pressure that lead to doubt, worry, anxiety, and fear. The endgame is that you perform tentatively and cautiously.

Your goal is to care just enough so that you give it everything you have. You accomplish this goal by having balance in your life, meaning sport is a part of your life, not life itself. You have other sources of meaning and satisfaction in your life outside of sport. And you recognize that, even if you don't achieve your sport goals, you will be okay (e.g., still loved by your family, liked by your friends, and able to find success in some other parts of your life).

Our culture reveres perfectionists. On the surface, who wouldn't want to be one? They hold themselves to incredibly high standards, drive themselves relentlessly in pursuit of perfection, and usually find quite a bit of success. Yet, there is a dark side to perfectionism that you may not be aware of. The goals they set for themselves are often unattainable, resulting in almost-guaranteed failure (at least in their own eyes). Perfectionists make their self-esteem dependent on how they perform and the results they produce. They berate themselves unmercifully for failing to live up to those unreachable goals. Perfectionists often fear failure more than they are want success. They are also unwilling to take reasonable risks because, by definition, they may lead to failure. Finally, I have never met a truly happy perfectionist because how can they be happy if they aren't perfect (which, as human beings, is impossible).

My antidote to perfection is excellence which takes all of the good things that perfectionism has to offer, for example, excellence still sets the bar very high and excellence is attainable, but also rejects all the bad stuff related to perfectionism. Excellence allows for the mistakes and failure that inevitably occur in its pursuit. It also encourages risk taking because failure isn't threatening and is actually relished because it means you are pushing yourself to your limits. Finally, excellence makes chasing your goals fun and exciting rather than anxiety provoking (thus leading to, rather than detracting from, happiness).

Fear of failure is the most common and most harmful of the obstacles I see in my work with athletes. The reality is that failure isn't worth fearing; the most successful people in all walks of life fail frequently and monumentally on the way to success. The fear of failure comes from the meaning that you attach to failure (e.g., "My parents won't love me," "I will be a failure in everything I do."). Young people get this fear of failure from their parents and from our hyper-achievement culture in which being labeled a failure is worse than death. This fear can become so great that you become more focused on avoiding failure than pursuing success. In doing so, you become unwilling to take risks (yes, perfectionists have a profound fear of failure) and even sabotage your efforts to succeed to protect you against the possibility of failure even when the chances of failure are small.

The only way to achieve success is to accept that you might fail and that's okay. Bode Miller, the Olympic skiing champion, exemplified this attitude because he never cared about failing. All he cared about was giving it everything he had and performing as fast as he could. If Bode did that, he was satisfied, regardless of his result. If you don't give it your all, you have zero chance of success. If you do, your chances aren't 100%, but they are far higher than zero. If you can let go of your fear of failure, you free yourself to throw yourself into your sport with reckless abandon.

Expectations are a kiss of death in sport, in other words, if you enter a competition focused on expecting a certain result, you are pretty much assured of not getting that result. Expectations are so harmful because they put you in a mindset in which you have to meet your expectations because, well, it is expected of you. To not meet the expectation would be perceived as a major fail. Directly connected to fear of failure, expectations always conclude with a threat; for example, "I expect to win today", or else. The "or else" may be: people will think I suck, I won't be able to compete for a DI college, my dreams of being a pro will be over, or some other scenario that you think is equally catastrophic. The weight you place on fulfilling these expectations results in immense pressure which, in turn, produces doubt, worry, and anxiety, all of which will make meeting those expectations very unlikely.

Your goal is to let go of the necessity of expectations and embrace the possibility of goals. The goal of "I want to win" is much different than the expectation "I need to podium." With the former, you naturally want to move toward your goal with determination and excitement; with the latter, you want to avoid the expectation like the plague.

The four obstacles I have just described create a unscalable wall of negativity that basically ensures both failure and the complete absence of enjoyment in your sport. You have no confidence and are filled with doubt. You perform with a sense of impending doom. You experience tremendous anxiety and tension so you're physically incapable of performing your best. You are your own worst enemy on game day. Your opponents want to be beat you on game day. If you are your own worst enemy, then you have no chance of performing your best and achieving your goals.

Of all the areas I work with athletes on mentally, the removal of these obstacles is my priority because, with them in place, the chances of success are very low. Your goal is to shift from this position of weakness, grounded in overinvestment, perfectionism, fear of failure, expectations, and negativity, to one of strength that includes a healthy investment in your sport, the pursuit of excellence, striving for high goals, and having a positive attitude.

Of course, this change is easier said than done, but it begins with awareness of the obstacles you or others have placed in your path toward your athletic dreams. The commitment to change also involves the realization that the road you are on just isn't going to get you to your destination. After that, you must understand how the obstacles have come into being, why they hurt you, and then do the work necessary to tear them down. Only then will you have the opportunity to perform your best and achieve your sports goals. 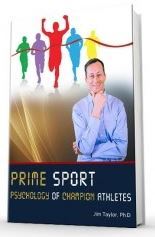