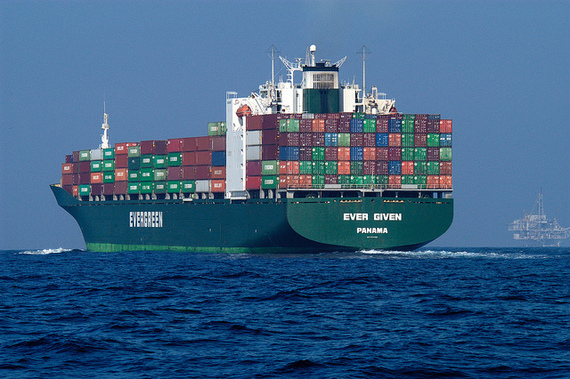 To be economic, something has to be worth more than it costs. Economic activity, per se, is more beneficial than detrimental. Technically speaking, "marginal utility is greater than marginal disutility."

If you liked a rug, but liked your grandkids more, it wouldn't be smart to grab the rug out from under them. That's basic microeconomics. Yet if we look around and reflect a bit, doesn't it seem like all that economic activity is pulling the Big Rug out from the grandkids at large? Water shortages, pollution, climate change, noise, congestion, endangered species... it's not going to be a magic carpet ride for posterity.

Growth was probably economic for much of American history. But we have to know when times have changed and earlier policy goals are outdated. In the 21st century, when we're mining tar sands, fracking far and wide and pouring crude oil by the ton into the world's finest fisheries, trying to grow the economy even further is looking like a fool's errand. That's basic macroeconomics.

Right now we've got the Chinese miracle. We're supposed to be on the cusp of an Indian miracle. Seems like we already had a more general Asian miracle, having to do with "tigers."

We've had Brazilian, Italian, Greek (yes Greek), Spanish and Nordic miracles. There's been the Taiwan miracle, the miracle of Chile and even the Massachusetts miracle. Don't forget the earlier Japanese miracle and more than one historic German miracle.

Let's hope these aren't the kinds of miracles they use to determine sainthood. Saint Dukakis, anyone?

No, economic growth was never, anywhere, a "miracle." It's never been more than increasing production and consumption of goods and services in the aggregate. It entails an increasing human population or per capita consumption; these go hand in hand in a growing economy. It's measured with GDP.

Whoop-de-do, right? Maybe Wall Street investors and journalists are an excitable lot, and it's easy enough to be surprised by a growth rate, but "miracle?"

Myth #3. Growth isn't a problem for the environment, because we're dematerializing the economy.

Now that would be a miracle.

Let's get one thing straight: The economy is all about materials. "Goods," in other words. Oh sure, services matter too. But the vast majority of services are for purposes of procuring, managing or enjoying our goods.

The biggest service sector, transportation, is responsible for enormous environmental (and social) impacts. Transportation is instructive, too, about the relationship between goods and services. People don't line up at cash registers demanding random acts of transportation. No, it's all about moving materials -- goods or people -- from point A to point B, and moving them economically. Every form of transportation takes energy as well as copious supplies of materials (for vehicles and infrastructure) and space.

With all the talk of "de-materializing," surely there must be services that transcend the physical, right? What about the Information Economy?

Myth #4. The human economy went from hunting and gathering through agriculture and on to manufacturing, and finally to the Information Economy.

The fact is, there never was -- or always was -- an information economy. Pleistocene hunters needed to read mammoth tracks more than we need to read our Twitter feed.

Now when it comes to processing information, the computer was more or less a "revolutionary" invention, like the internal combustion engine was for transportation. But what's less material about it? Just as today's hunters have semi-automatic rifles with high-power scopes, they have (material) computers that help them gather information for buying more (material) guns, scouting more (material) terrain and shooting more (material) deer. Anything about that seem greener than before?

Information has proliferated alright, in lock step with the material goods and services it's been used for. Yet to speak of the "Information Economy" seems like grabbing for some type of economic miracle, and we've all seen how cheap miracles are in economic rhetoric.

Myth #5. At least economic growth is egalitarian, because a rising tide lifts all boats.

Once upon a time the rising tide metaphor may have had some merit. In the 21st century -- think resource wars, climate change, endangered species -- it's more like a rising tide flooding all houses. Which brings us back to Myth #1.

It seems like all the talk of economic growth was overblown, more the result of Wall Street excitement and political rhetoric than sober thought. Maybe what we really want is economic slenderizing.