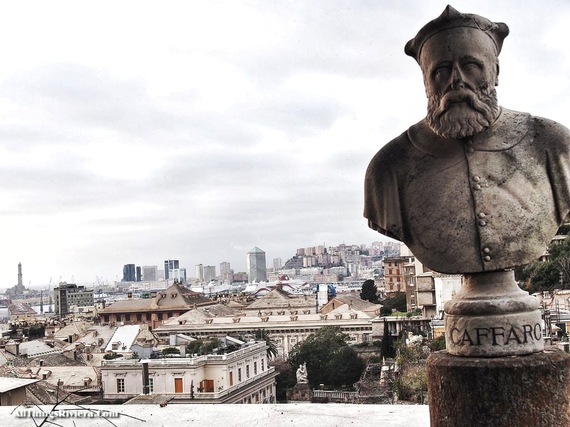 For many people, I suspect, Genoa is little more than a run-down harbour town in between the two strips of the Italian Riviera. For me, it is an endless source of delight. We go there fairly regularly, but no matter how many times we return: we always find something new to discover.

Here are five places where you can to start your own personal journey: 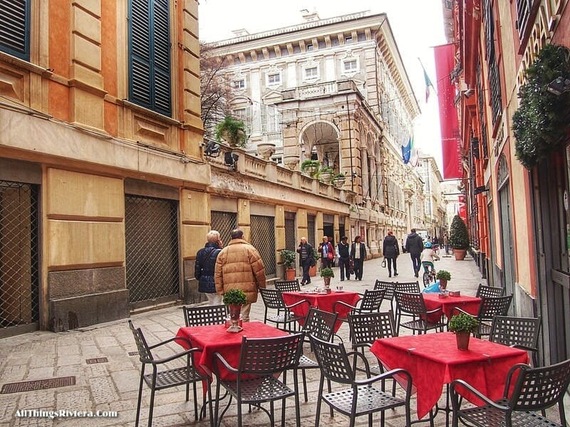 What Venice was to the eastern Mediterranean in the early modern age, Genoa was to the west: the predominant maritime and mercantile empire, a formidable military bully, a powerful force for civilization, and often all of that at the same time.

There is something else Venice and Genoa have in common: they pretty much invented the modern city, establishing the rules of how to share a public space between different social groups - merchants and landowners, peddlars and craftsmen, Christians and Jews.

These early modern cities - much like Rome - were neither conceived nor built in a single day, but people have to start somewhere, and in Genoa, they started by making good neighbours out of different - often mutually hostile - aristocratic families.

Walking past the urban architecture of Florence and Siena, one feels that the various clans must have eyed each other suspiciously from their fortress-like palazzi. Genoa's Strada Nuova (today's Via Garibaldi) gives out different vibes: here, all prospective owners had to subject themselves to the will of a public authority which laid down the ground rules for the development, guaranteeing the end product would be a harmonious whole. And that's what it still is, almost 500 years later. 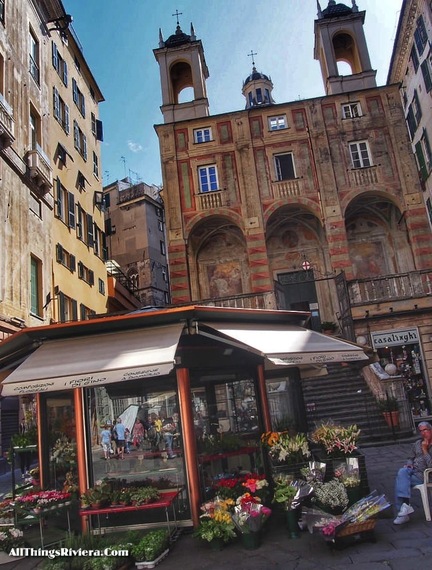 Why Genoa is not as popular as Venice or Florence, I have no idea. Maybe it's because it is a bit grubby in parts, more so than most tourist towns in Italy. But its historic core (Europe's largest after Rome) looks interesting everywhere, and no matter which way you turn, you are sure to discover something intriguing: a hidden statue in a shadowy lane, a semi-abandoned palazzo or chapel, a dark alley that suddenly opens up into a scenic view of the sea, a street where everybody appears to have jumped straight off the boat from Africa. If that's not the definition of a fascinating city, I would like to hear a better one. 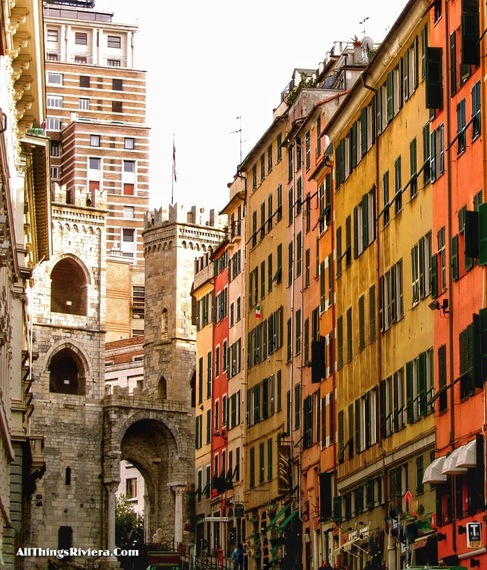 Much of Genoa was built on a hillside, with blocks not laid out in a neat, horizontal pattern but rather piled on top of one another. Standing at the foot one of these piles, you are looking up at 100 or 200 metres of vertically stacked concrete: there are few places in Europe that have been composed in a similar chromatic scale of the "urban sublime".

This vertical dimension also guarantees that the small public gardens in between the housing blocks often offer breathtaking views - such as this one ... 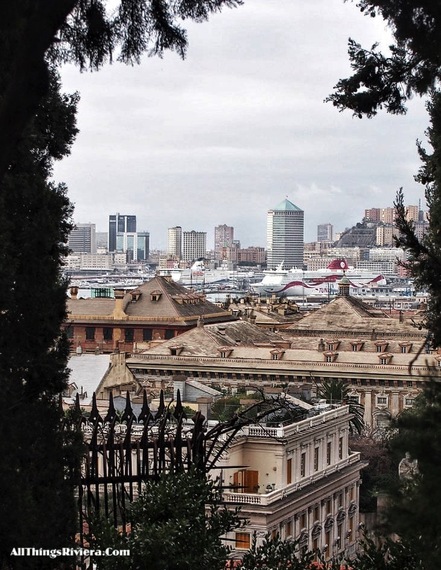 ... from the Villetta di Negro gardens near Piazza del Portello. 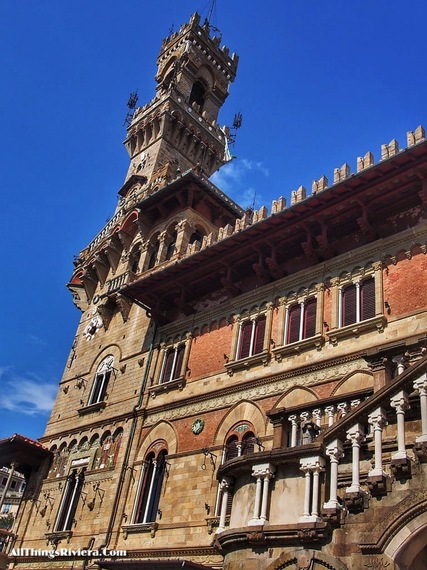 Barcelona has Gaudì, Genoa has Gino Coppede, but only one of the two is world famous. The two architects were near-contemporaries, and although there are certain differences between their styles, they also have a great deal in common: a love for stage effects, a willingness to borrow from almost any historical source, a heroic determination to ignore the demands of good taste and restraint.

Coppede's works are concentrated on Via XX Settembre (Genoa's main shopping street) and the Staglieno cemetery. His magnum opus, however, the faux-medieval Mackenzie Castle, rises incongruously over the roofs of a suburban district near Righi. The experience of suddenly coming across it is like slipping out to buy a pint of milk at your nearest supermarket and running into Sir Lancelot du Lac on his way to Camelot. 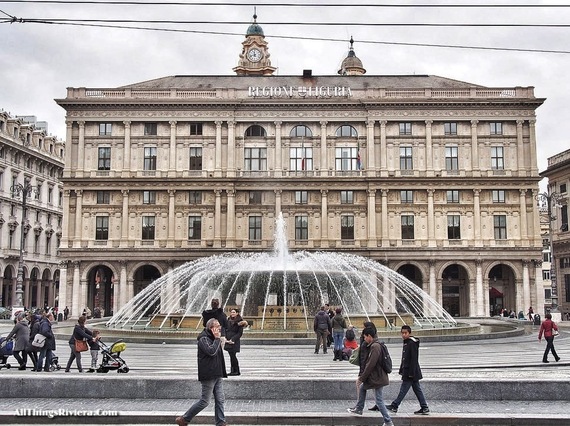 We Genoa lovers may sometimes feel that the world insufficiently resonates our passion, but then, we shall always have Anton Czekhov.

In the 1896 play The Seagull, Doctor Dorn praises Genoa as the highlight of his entire journey along the Mediterranean coast, summarizing (we may assume) the writer's own experiences from a trip in 1894. "When you leave the hotel in the evening," Dorn enthuses, "and throw yourself into the heart of that throng, ... their life seems to be yours, their soul flows into you, and you begin to believe at last in a great world spirit."

Where better to experience that throng than at Piazza De Ferrari, Genoa's busy hub between old town and new. Sit down in one of the cafes under the arcades, order yourself an espresso or a hot chocolate and watch the tides of humanity roll across the vast public square. Perhaps then, like Doctor Dorn, you will begin to understand. 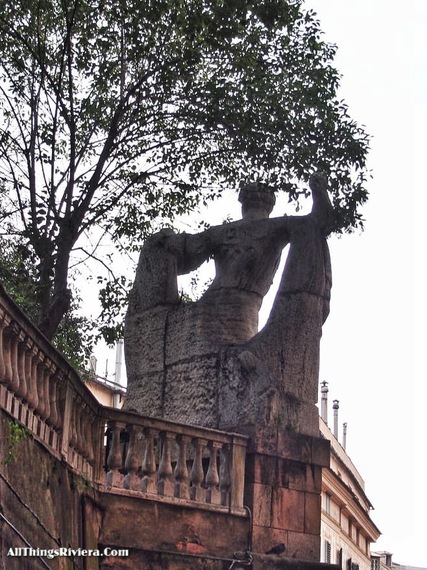 Michael Schuermann has more tips for city walks and easy hikes in the Italian Riviera at Easy Hiker and All Things Riviera.