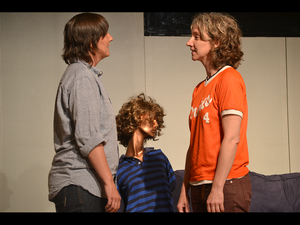 Brooke O'Harra's I'm Bleeding All Over The Place: A Living History Tour is at La MaMa from June 16-26. It is the fourth part of a nine-part project titled I am Bleeding All Over the Place: Studies in Directing or Nine Encounters Between Me and You, which began in 2014 while in residence at the New Museum. Tanya Selvaratnam is in the "tour" and last worked with O'Harra on the epic And That's How the Rent Gets Paid by Jeff Weiss and Richard C. Martinez, which was at the Kitchen NYC in July 2015. Selvaratnam asked her a few questions about what this "tour" might bleeding be about.

Tanya Selvaratnam: Why do you call it a tour and not a play?

Brooke O'Harra: I have been conceiving of the project all along as a tour. It is not a play at all - it resists many of the conventions of a play, while at the same time addressing the assumptions and intentions of everyone involved in making plays. In the most paired down terms, this is a tour that explores my relationship to the audience and the audience's relationship to performance. I want to know more about why we are all there in the room together. I have been drawn to theater because of the live-ness, the weird formal codes of storytelling, the strange intimacy that happens inside of a group experience, the vulnerability foundational to the act-the real possibility that something could go wrong - these things make the experience charged. But as a maker I am always exploring the limits and tricks of the form. I am obsessed with the process of making, the levels of interpretation that happen from writer to director to designer to actor to audience. Who is making the meaning? How does it come together? Where do these investments collide? You might think that from the inside of a project the "how and what" are obvious to the makers. But this is not true - the product is always mysterious and elusive. As a director I make choices with assumptions (even convictions) about how that translates to the audience, but the audience brings a chaotic mass of individual desires into the room. How do I deal with that? Tours of historic places and people address head-on the value of the subject - yet they pick and choose what to show - and in a living history tour there is always an actor in a costume pretending to be a real or fictional historical figure who interprets the importance of a history, a place, or an individual. That's wild. That's the form I want to use to have this encounter.

TS: Why are there so many collaborators, especially as writers? How did that work?

BOH: Four playwrights have contributed to this project: Casey Llewellyn has been writing inside of my original script and co-writing; Erin Courtney, Kristen Kosmas, and Heidi Schreck worked with me early in the project to record small dialogues from our daily lives which are now part of the script. I also hosted a panel at the New Museum in response to the first three parts of this project. I am using dialogue from that panel as well. There are also ten performers - which is a huge cast for a tour where the main guide is Brooke O'Harra (performed by the actors - I am not performing in the tour). There are four designers and four design assistants, as well as an original music score. So. altogether we are a force of 25 or so collaborators. This density of voices is always present when you make a show. In some ways this is a one-man show - this is about Brooke O'Harra having a serious conversation with her audience. But because I am a director I talk through dozens of people; that is how my voice is mediated. This mediation is an incredibly significant aspect of my relationship to my audience. In the final song and dance number the actors sing "I am a woman and you are the audience. I am Brooke and you are the audience." And they chant "Brooke Brooke Brooke Brooke Brooke." It is kind of crazy. But it also reveals all these interventions that happen between "me" and "you." These collaborators join in as one voice made from many unique voices to help me reach the "you" who is one audience and many individuals. 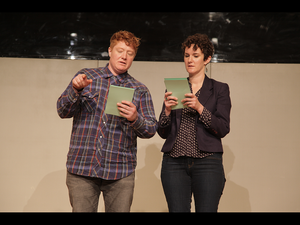 TS: Why are settings referred to as sculptures, and why is the show in a theater and not in a gallery?

BOH: I like the way in which sculpture steers our attention to particular elements of spatiality: form, material, the way various objects occupy space with bodies. This is distinct from the story-ness that comes with a traditional theatrical "setting." During this tour the audience travels to and through sculptures instead of sets. These are sculptures of stages. We see the "curtain" the "stage" the "walls/flats." They are made visible rather than enveloped in a conceit. In the theater there is never a real fourth wall - the fourth wall is a concept, but in this tour - one of the sculptures is a set with four walls - the fourth wall is actualized.

This tour is in the Ellen Stewart Theater at La Mama, which I feel is by far the most beautiful theatrical space in New York City. Ellen Stewart had the most immediate and profound impact on my work when I first moved to New York - mostly because she believed in me and let me be daring and bold in a very public setting. This 4th part of I'm Bleeding All Over the Place: Studies in Directing or Nine Encounters Between Me and You grew out of an invitation to create a new work for the La Mama 2015/16 Season. I am taking advantage of the history and grandeur of the space. I believe La Mama is the only theater in New York that would allow me to experiment like this and take the risks I need to take in order to interrogate my own relationship-historic and present-to these audiences who make me viable.

I am hoping that this work can happen in other places. A gallery is probably too small and confined a space, but a museum would definitely work.

TS: Why is there so much about the concept of desire in the show?

BOH: Desire is such a powerful drive in audiences - even in individuals who don't recognize that they are having desire. This desire could be mundane, like "I really want a burger after the show" or it could be directly related to the performance like "I really wish these people would sing and dance" or more literally about sexual desire like "I love that actor" which could also mean "I want to have sex with that actor." As a queer person I get so bored of watching super-prescribed heteronormative desire on the stage. And for years we LGBTQAI people have all had to watch a version of queerness or sex or gender on the stage that does not reflect our ideas or experiences of queerness, sex and gender. Once I started really allowing for my own desire to be made manifest in my work, I also found that I had a more direct relationship to my audience - or a more honest and immediate one. The tour/performance is not about desire or about sex. It's about what an audience wants and what a performer wants and what a director wants from meeting each other in a particular moment. I want to open up more possibilities for the desires we have inside of these performance encounters.

TS: . . . A Living History Tour is one part of a larger project I'm Bleeding All Over the Place: Studies in Directing or Nine Encounters Between Me and You. What will happen next?

BOH: Yes, this is part of a larger project that will become a book on directing. I am actually starting to write the book this summer. So the next few events may be smaller events to interrogate more specific questions that arise as I am writing. I also find that each project points to something else I need to further explore. So I can't quite predict what the next encounter will be until the audience arrives.

Brooke O'Harra is co-founder (with composer Brendan Connelly) of the OBIE Award-winning Theater of a Two-Headed Calf, which was initiated in 2000. She has developed and directed all 14 of Two-Headed Calf's productions including the OBIE Award-winning Drum of the Waves of Horikawa (HERE), It Cannot Be Called Our Mother but Our Graves a.k.a Macbeth (Soho Rep Lab), Trifles (Ontological Hysteric) and the opera project You, My Mother (La MaMa, River to River Festival). O'Harra conceived, directed, wrote for, and performed in the Dyke Division of Two-Headed Calf's live lesbian soap opera, Room For Cream, which ran for three seasons at La MaMa. She is the current recipient of the Doris Duke Impact Award for Theatre. O'Harra's directing work has been called a "wildly inventive treat" (Time Out New York), "lively and exploratory" (The New York Times) and "momentously original" (New York Post).

Tanya Selvaratnam is a writer, producer, theater artist, and activist. She is the author of The Big Lie and the forthcoming Confessions of a Manhattan Psychic.