"I was not a very ambitious kid," says Carson Ellis as she begins what she calls the "unconventional" tale of how she came to be a professional illustrator. Ellis and I are sitting down to coffee nearly 1,000 miles apart--she in Portland, Oregon and me at the beach in Southern California. From our posts alongside distinctly different regions of the Pacific Coast, we talk by phone about her creative inspirations--which include Eastern Europe, The Brothers Karamazov and 1960s folk music--and a recent collaboration with her husband, Decemberists frontman Colin Meloy, on a series of illustrated novels.

The illustrious artist, and mother to young son Hank, has illustrated several children's books, including Lemony Snicket's The Composer is Dead, and has created the artwork for indie rockers, The Decemberists, since the band's inception. Though she earned a painting degree from University of Montana (because the school had no illustration program and yet she was still "really into the idea of living in the Rocky Mountains," Ellis made her way to Portland years later and resumed her craft of illustration. Band fliers and EP covers led to full-blown album art, advertising and editorial work and finally kids' books after a literary agent approached her. Her unmistakable style has earned her a devoted following and created for her a dynamic and lasting role in the arts. 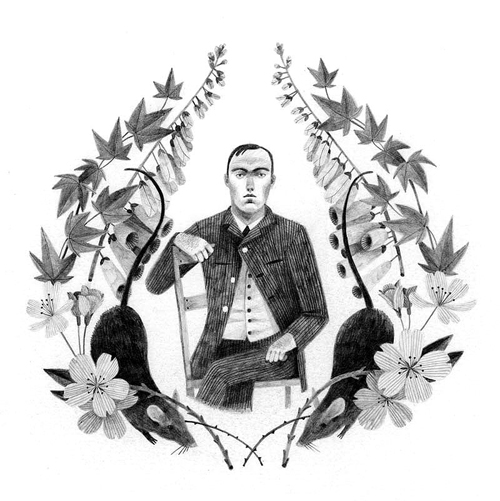 Art for the Decemberists LP "Hazards of Love"

Carson Ellis: I guess the illustrator's role is to always provide a visual counterpart to something non-visual, whether it's music, literature or an op-ed piece in a newspaper. Ideally it's to give someone something to look at but also to kind of enhance that experience in some way--to make it a little more complex. I feel like a lot of illustrators do what I do, working with all of these different mediums and within all these different spheres. That's the awesome thing and the not awesome thing about being an illustrator--you get to be listening to an album for a month straight and doing the album art for it, and you're totally in the world of this one album, and then you go directly to a picture book which might be a total 180. You bounce around a lot. 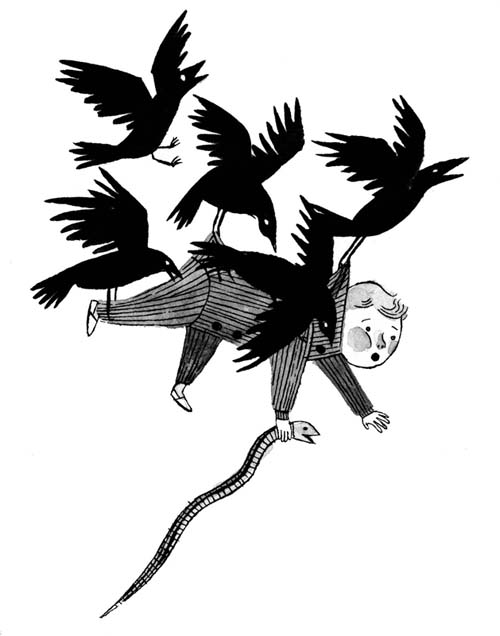 A sneak peek at a Wildwood illustration

AKG: Speaking of album covers, I could stare at "The Crane Wife" album cover [which you illustrated] all day. (I could also listen to the album all day.) What of your own work do you still particularly enjoy or respond to?

CE: I bet a lot of artists would say this, but I feel like the work that I love is the work that people tend to respond least to. Over the past couple years I've done a series of really tiny graphite drawings on manila colored paper, and they're really tiny and detailed--about the size of a postcard. I just labored over them and each one meant so much to me. But I think sometimes that doesn't translate to the viewer. The amount of love and time I put into them doesn't necessarily make someone understand or love it as much as you do. I also just illustrated a book called Dillweed's Revenge by an author named Florence Parry Heide. It was an old manuscript that she wrote in the 70s. She's this great old, kind of macabre, kids' author. It's the fifth book I've illustrated for kids and it's the one I think I am the most proud of. 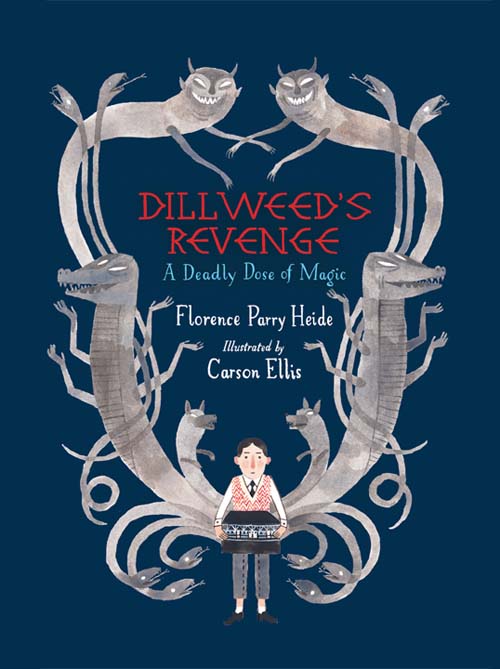 
AKG: Your illustrations have a folksy, old-world quality to them. Often your characters look like my Polish and Russian ancestors. You also mentioned the macabre side of your illustrations. How would you describe your work?

CE: Well, folksy, old-world is great with me. That's what I'm going for. I have Polish and Russian ancestors too, and I'm really intrigued by that side of my heritage. I love Russia, so whenever I'm free to do whatever I want, I'm always trying to evoke Russia or the Soviet Union, or that part of the world in some way or another. People tell me a lot that my work reminds them of Edward Gorey, and feel like, no, it's not quite Victoriana that's interesting to me. I do feel like I always want to draw times gone by, but it's not really turn of the century England that's intriguing; it's really more like the countryside of Siberia or something. 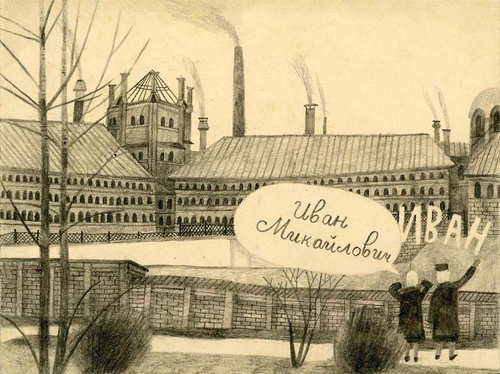 "A Message for Ivan": A small graphite drawing


AKG: I'm really excited about the project I've heard you and your husband are collaborating on now--a series of illustrated novels for middle-grade readers that will be published by HarperCollins next fall. Can you tell me more about the Wildwood series?

CE: I'm so excited about it too. It's a series of illustrated novels for middle-readers, which means about eight to twelve [year-olds]. So these are for kids, but in Colin's sort of characteristically dark way, they're definitely scary in places. I'm a big Narnia nerd--I read them all when I was a kid over and over--and they seem to be in that tradition. They'll be heavily illustrated with full color, full page illustrations and some black and white spot illustrations, and they'll have lots of maps. We want them to be very map heavy. So far there are three [books] that we have a deal for, which are planned out and have titles and plots, but the series might go on. We have a lot of other ideas. It's been so fun to work on them so far. I'm really just spending the summer trying to get the book jacket done; I've been sketching and sketching, and Colin has spent the summer writing. 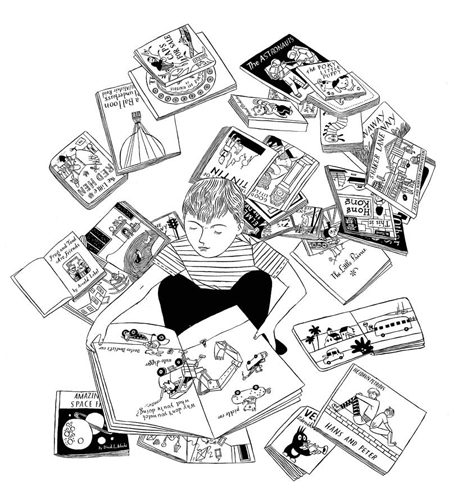 A portrait of the artist's son, Hank, reading
AKG: Now tell me something that has nothing to do with art.

CE: I'm going to spend the rest of the day gardening.