Humor in the church is a double-edged sword. On the one hand, what pastor doesn't like to start their sermon off with an attention-grabbing joke to wake people up in the pews? On the other hand, it can become incredibly tricky to navigate what is appropriate to joke about and what veers too deeply into irreverence in the context of church. Christian culture does not consider humor to be a virtue. Being funny doesn't show up as one of the fruits of the Spirit. Christians may be known for many things, but not for being able to take a good joke.

Here are five reasons Christians should actively engage in comedy.

1. The Art of Paying Attention. Comedy, at its core, is the art of exploring humanity. Behind every joke, comedians spend hours relentlessly taking notice of our world, paying attention to the nuances of human interaction to zero-in on one ridiculous detail, serving it up as the punchline. The iconic sitcom, Seinfeld, is often described as being a show about nothing because it simply makes jokes about ordinary life experiences, often mirroring the real lives of the producers and writers. The comedian jolts us into a realization that something we do in our ordinary life is absolutely ridiculous. Much like the discipline of science and art, it is our sacred duty to observe the wonders of what God has gifted us--paying meticulous attention is certainly an act of worship.

2. Thinking Outside the Box. In order to be funny, you have to be surprising. People don't laugh at what is expected, but at creative punchlines and edgy wit. Pushing at the boundaries of social etiquette and overturning assumptions is a pursuit of greater imagination. I think we need more troublemakers, those who dare to "go there." No one ever changed the world by keeping rules. The revolution of the Christian hope begins with a practice of wild imagination--expanding possibilities for what is to come. 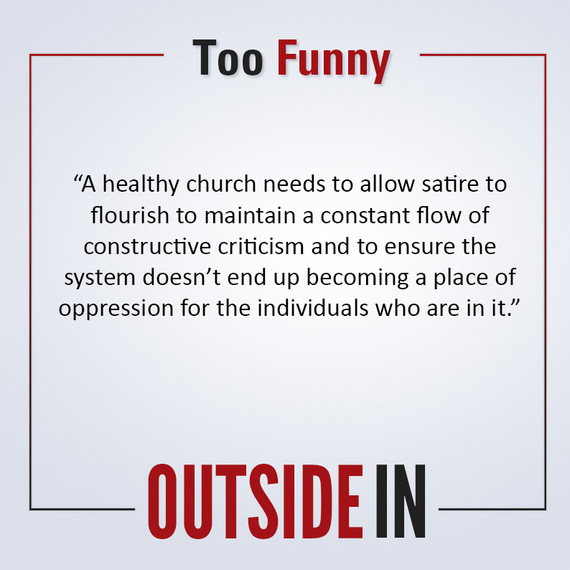 3. Self-Deprecation. One of the reasons why Christians struggle to perform well in the world of comedy is our lack of self-deprecation. Author Larry Shallenberger says this in an article titled, Why aren't Christians Funny?,

"Humor requires the ability to admit weakness and a willingness to laugh at it...but it's akin to putting bullets in your opponent's gun in a culture war. You can't laugh at yourself until you cede the moral high ground."

Indeed we are so concerned with drawing people to Christ that we are afraid of exposing our flaws. But self-deprecation can disarm the tensions of culture wars and allow a refreshing honesty to breathe life into our tense conversations. Don't be afraid of making fun of ourselves. Let's face it, we've got plenty of material.

4. The Prophetic Voice of Irreverence. Satire has long been used as a tool of social commentary, from the French Enlightenment writer, Voltaire, to the great American author, Mark Twain, humor has been wielded as the sword of truth. Sarcasm, though irreverent, deftly draws attention to the ills in society we have numbingly accepted as normal. In order for humor to be effective, it points out that which is true and ridiculous at the same time, so the audience ends up simultaneously slapping our knees and nodding our heads. We laugh, and then we are sobered and moved to action. Jesus himself used irony and hyperbole when he talked about planks in eyes and camels going through the eye of a needle. Could he have been using stand-up comedy to teach his truths?

5. Carbonated Holiness. The many benefits that laughter brings to our health and wellness are well documented. Some physical and mental benefits include lowering stress hormones, relaxing muscles, preventing heart disease, easing anxiety, and enhancing resilience. Laughter also bonds us to each other, strengthening a sense of community. Few things in life are as delightful as the peals of laughter coming from a baby, innocent and guttural and unreserved. God created us with an innate gift of laughter, and what better way to honor God than to exercise what author Anne Lamott calls "carbonated holiness?"

Cindy blogs at cindywords.com. You can subscribe to her newsletter and receive her FREE e-book, Outside In: Ten Christian Voices We Can't Ignore.