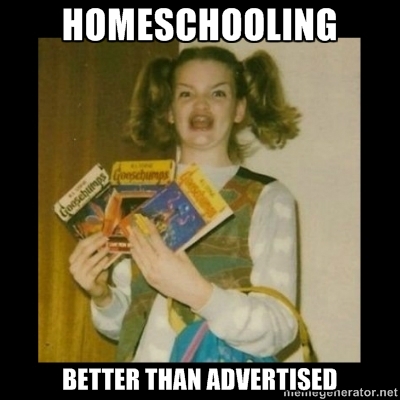 Do you love school? Do you ache with a burning desire to rise early, sit through hours of lectures, and complete your next homework assignment? If so, then this article is not for you.

Does school bore you to death, but you would rather suffer quietly than do something about it? Then this definitely isn't for you.

But if you're trapped inside a school that doesn't engage you and you're willing to make a change, then I have good news for you: You can leave school tomorrow and never look back.

All you have to do is become a homeschooler.

"That couldn't work for me." "What about a social life?" "Is that even legal?" If these are your first thoughts, you're not alone. The homeschooling movement is riddled with stereotypes, and while some of them possess a grain of truth, most are simply false. Let's dissect four of the most persistent ones.

When I was in high school in the late nineties, I remember the word homeschooler conjuring the image of smelly, socially deficient teens with awkward facial hair. Though I never actually met one, I was somehow convinced that these mythical homeschoolers lived on a backwoods farm, took algebra lessons from mom at the kitchen table, never learned about condoms or evolution, and possessed no friends outside of their immediate family.

Then I grew up, got involved in the world of alternative education, and met hundreds of teenage homeschoolers. That's when I learned that, while there are some really awkward homeschoolers out there (who smartly avoid the bullying and teasing awaiting them in school) there are just as many "normal" ones who could easily navigate the school halls and hierarchies. But they see the emptiness of the popularity game and choose not to participate.

When you choose to homeschool, you're choosing to socialize in the way that adults do: by bonding over shared interests, values, and experiences. Homeschoolers do this by making friends through conferences, summer camps, jobs, hobbies, gaming, local groups, or religious circles. This process isn't easy or automatic; it does requires that you put yourself out there. But the end result is a higher quality of friendships instead of merely a higher quantity.

If you've spent your entire life in school (as most teenagers have), it's hard to imagine life without classes, grades, and curriculum. So when you try to imagine how homeschoolers learn, it's easy to think that they simply do "school" at "home."

While some traditionally-minded homeschoolers certainly feel compelled to pore over state-mandated textbooks in the comfort (and loneliness) of their houses, there are also many teenage self-directed learners who create their own curriculums based on their passions, interests, and goals. You're more likely to find these teens interning for a cool company, road-tripping with friends, or building a garden than doing textbook problem sets at home.

Some homeschoolers are so adamant about self-directed learning that they use an entirely different word to describe their approach: unschooling. The unschooling philosophy is simple: do what you love, and the learning (and eventually, money) will follow.

4) Homeschoolers succeed in college -- and outside college.

Thanks to an increasing awareness of homeschooling (and unschooling), homeschoolers today get into great colleges with a minimum of roadblocks. Yes, you'll probably need to take the SATs and a handful of community college classes to prove your academic prowess, but there's plenty of time to do both self-directed learning and college prep. (It's amazing what you can achieve when you stop wasting your time sitting bored in class.)

Homeschool graduates who reflect on the skyrocketing costs of college tuition and make the conscious choice not to attend do well, too. Why? Because when you start practicing self-directed learning (and start picking yourself instead of waiting to be picked) at a young age, you learn to be an entrepreneur. And entrepreneurship is the ultimate 21st century skill.

Choosing to homeschool doesn't mean giving up friends, breaking the law, missing out on college, or reading textbooks at home by yourself. Instead, think of it as your carte blanche to escape school and begin pursuing a real education.

Teenagers and college students can read Blake's second book, Better Than College: How to Build a Successful Life Without a Four-Year Degree, for free.

Author, The Art of Self-Directed Learning