Nothing makes me smile, get up on my feet and applaud, yell, or cry, (often with in the same minute) more than the Summer Olympics. They are exciting, terrifying, at times death defying and, most definitely, the ultimate tribute to the grace and beauty of the drive and perseverance of an athlete.

Since the first Olympics in ancient Greece back in 776 BC, people have gathered to marvel at the strong, disciplined, and driven athletes, who themselves traveled to compete in one place. Until the modern Olympics that place, Olympia, sat atop a hillside approximately four hours west of Athens. The games were designed to take a break from battles and offer entertainment through the achievement of well-trained athletes.

The first modern Olympics took place in Greece in 1896. In 1900 Paris hosted the second Olympiad, and thus began the traveling locations around the world that hosts the Modern Olympics maintaining the four-year time slot initiated at the 776 BC Olympics. 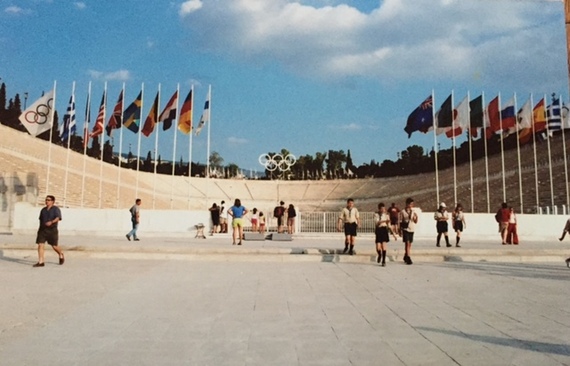 Author's photo of the 1896 Olympic Stadium in Athens.

With the invention of the television and airplane, the Olympics have gained worldwide popularity. Millions of viewers across the world watch the games on television. Many stay spoiler free by watching it live in their time zone. Others travel from around the world to the venue and watch live from the stands.

It is a time to put aside the smart phone because, in the blink of an eye, an athlete can slip, dashing their quest for an Olympic medal, or cross that finish line first, perhaps breaking a personal best, Olympic, or even World Records. Less than a split second can determine a Gold medalist. Once that medal is awarded to the athlete standing on the center podium and the national anthem of his/her country is played, there's no denying the respect and allegiance to the country by fellow team members, those in the audience waving that country's flag, and viewers watching it unfold on television. When I hear our national anthem and see the tears well up in the athlete's eyes I can't help but feel both pride for my country and respect for this athlete who has successfully taken this opportunity to grace our country with a gold medal. These athletes represent achievement at its best. Many of them come with uplifting stories that make us believe in dreams coming true.

Certainly the timing of the Olympics offers the hope for peace throughout the world. It also gives the USA viewers a break from the political campaigns. As the presidential election draws closer, our thought is presently on the number of Olympic medals we can proudly claim. No matter what your politics, or who you plan to vote for, everyone wants our athletes to succeed, break records and stand on the podium with the athlete mouthing "oh say does that star spangled banner yet wave..."

Recently a friend asked "Olympic watchers--If the USA is out of it (not in contention) who do you root for and why?" While some root for the sport or their "home" country, many root for the underdog or athlete with the most to gain. And many have gained in this Olympics from Michael Phelps with a whopping twenty-eight Olympic Medals to those achieving the first or only gold medal for their country.

Though I enthusiastically tune in to all of the events, I admit the gymnastics athletes leave me in complete awe. Of course, I was the kid who optioned out of gym class during gymnastics and chose to do a school report in the library because the "horse" and balance beam intimidated me. To see these men and women mount, dismount, and do the most complex and elasticized performances in between is truly the epitome of mind and body control to the zenith.

Five reasons why we're obsessed with the Olympic Games:

1. It is an international event that embraces the very best athletes from all over the world.
2. The Olympics have been around for centuries and continue to grow in sports and popularity.
3. We are given a behind the scenes look at the athletes. Their positive uplifting stories offer hope to generations of youngsters seeking to achieve their own medals, Olympic or local.
4. It forces us to be in the moment with the athlete. Records continue to be broken. Recently, Michael Phelps broke the record for most gold medals surpassing one set by Leonidas at the 1896 Olympics
5. We are able to step back from dirty politics with mud slinging advertisements gearing up for the presidential election and experience the rawness of an individual who through drive, conditioning and the ability to become one with his/her sport showcases the dedication and strength of an amazing athlete representing their country.

With the Olympics coming to a close, this is a good time to pick up that racquet, get on that bike, or dive in a pool and set some personal bests. I might even do a flip on my neighbor's trampoline. I've certainly been inspired by the very best.