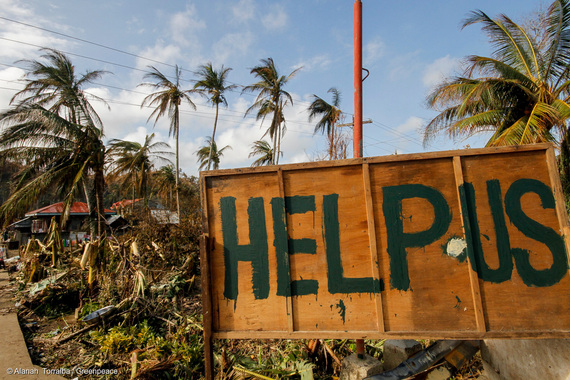 For the first time ever, a national human rights body has ordered the world's largest fossil fuel companies to respond to allegations that they have contributed to human rights abuses in the Philippines. Last year, disaster survivors, community-based organizations, and individual Filipino citizens, side-by-side with Greenpeace Southeast Asia (Philippines), filed a petition with the Commission on Human Rights of the Philippines (Commission) asking for an investigation into 47 industrial carbon producers (big polluters) for putting their fundamental human rights at risk from climate change.

The Commission heeded the petitioners' call to investigate these wrongs, and the probe is now at a critical juncture. This week, the Commission enjoined the companies to submit responses to the allegations. While some companies might stick to business as usual and ignore the order, or even worse, attempt to silence those who are seeking justice, others may change tack, and come to the table. Then we can start rapidly changing behaviors, investments, politics and policies, prevent further harm to people vulnerable to climate change, and move towards the inevitable renewable energy future.

Here are five good reasons why CEOs of fossil fuel companies should respect the lives and livelihoods of those living on the front lines of climate change and answer the Filipinos' petition.

The Commission has ordered the big polluters to respond to the petition within 45 days. The issues raised should come as no surprise. Shareholders have repeatedly requested that fossil fuel companies submit business plans in light of the urgency to reduce greenhouse gas emissions. This year, a whopping 38% of Exxon shareholders supported a resolution requiring Exxon to publish an annual report explaining how it will adjust to a 2 degree world. Like Exxon's shareholders, the petitioners in the Philippines want the big polluters to submit plans on how the business model will change in light of urgent need to limit temperature rise and prevent human rights impacts.

Fossil fuel CEOs should be under no illusions. It is now in their job description to consider how their company's business strategies must change to keep fossil fuels in the ground.

2. The writing is on the wall

The Paris Agreement signals the end of the fossil fuel era. Business-as-usual is no longer a viable option. The divest-invest movement is unstoppable. A recent report explains that with 'over 500 hundred institutional investors and tens of thousands of individuals, the assets under management of divesting institutions exceeded $3.4 trillion'.

Last year, Greenpeace Norway and many others successfully campaigned to get the country's $900 billion sovereign wealth fund to divest from coal, impacting 122 companies across the world. Money is now flowing away from fossil fuels, and the world's energy system is rapidly transitioning to be powered by the sun and the wind. All of the CEOs can use the opportunity to report to the Commission on the company's position on the transition into this new era of renewable energy.

Some companies may have tried to hide the truth about climate change, in order to protect profits. Recent investigations revealed that despite understanding the risks of climate change years ago, Exxon has been involved in a disinformation campaign aimed at confusing the public and investors about these risks. Meanwhile, it was using this information to make its business plans.

The Union of Concerned Scientists has called on fossil fuel companies to stop disseminating misinformation on climate change. CEOs should report to the Commission on efforts to completely cut ties with front groups, contrarian scientists, elected officials, and any others who undermine climate science in order to derail action.

4. Talk now or get sued later

Climate change litigation is a material risk. Delaying action to address the human rights impacts of fossil fuels will only heighten the risk of lawsuits for CEOs and corporations. In a recent letter to the U.S. Securities and Exchange Commission, Greenpeace USA and other NGOs commented that some companies and directors face the real possibility of tort and fiduciary liability if they fail to consider the legal risk of continuing to contribute to climate change or misleading the public and investors about the threats of climate change. Fossil fuel corporations could face lawsuits similar to tobacco companies for misrepresenting harms from cigarettes, and they were held accountable for lying to the public.

Smart CEOs can head off high-profile investigations and lawsuits by ending climate denial and embracing the renewable energy transformation. One company has already acknowledged that some fossil fuel reserves will have to stay in the ground.

5. Have a good answer for your grandchildren

What will a fossil fuel CEO say when her or his grandchild asks, what did you do about climate change? It will be embarrassing for a CEO to say that they were adding kindling while Rome burned. Instead, he or she could explain to their admiring grandchild that they did everything possible to help humanity avert the climate crisis.

Anna Kalinsky, the granddaughter of James Black, a former Exxon scientific advisor, explained that in 1977 her grandfather "warned Exxon executives that the world was just a few years away from needing to rethink our energy strategy to prevent destructive climate change;" but "instead, Exxon chose to mislead people about the risks of climate change - and continues to mislead people today." The grandchildren of CEOs will remember what they said and did. They can start to make their grandchildren proud right here and right now.

The investigation in the Philippines is a catalyst for companies and CEOs to do the right thing. It is time for them to change their corporate behaviour and take steps to eliminate the devastating impacts of climate change. To learn more and stay involved in this ground-breaking effort, please sign up on Greenpeace Southeast Asia's website to receive updates on the investigation.