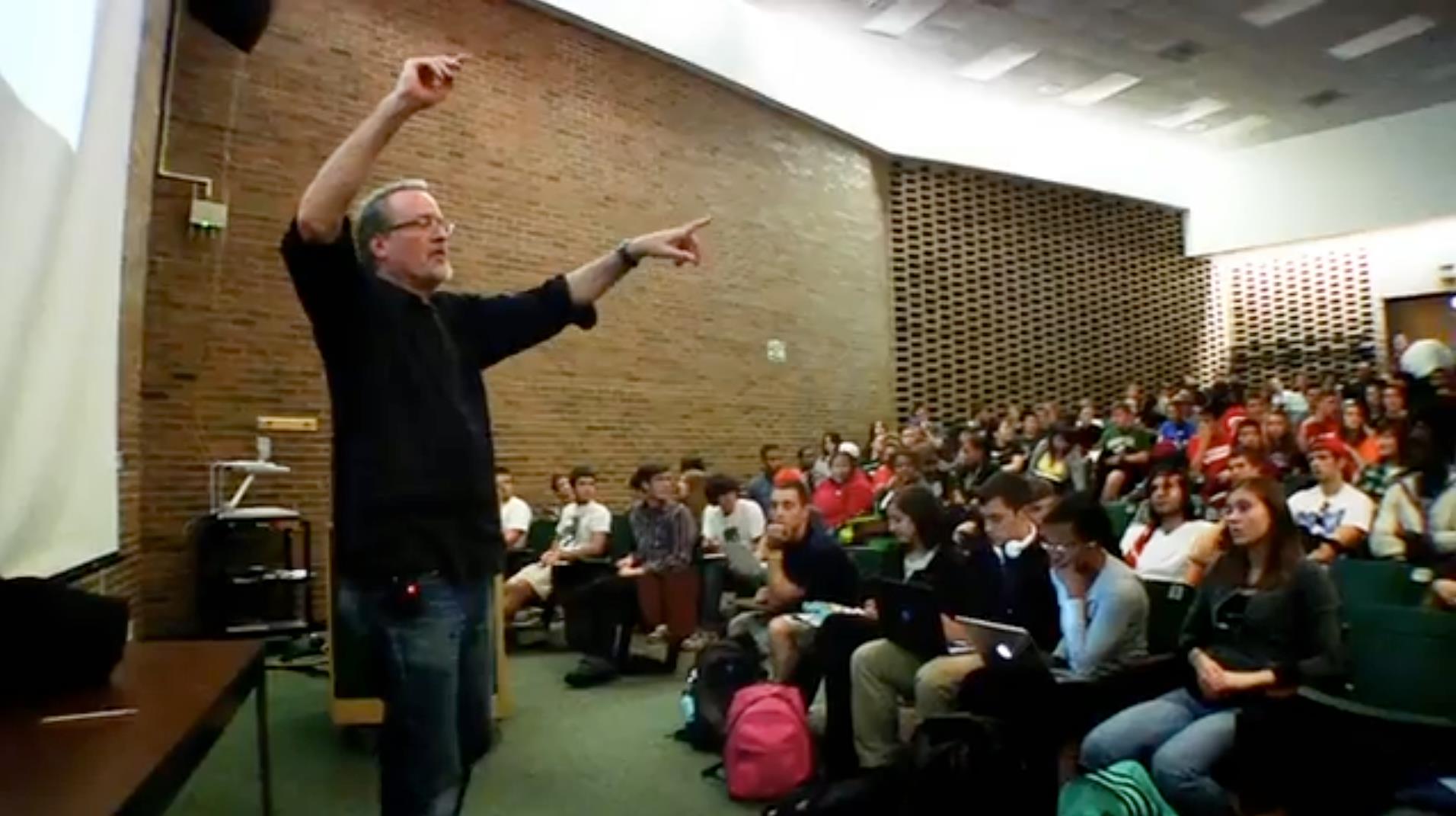 The guest professor in my large class of 200 journalism students at Michigan State University was just hitting his stride when suddenly every single student plunged to the ground as though looking for a dropped pencil. Stunned, the speaker continued his talk. About 15 minutes later the students leapt to their feet and applauded furiously! Shattered, he began to realize that something he was saying, some word, was igniting this explosive response from the students.

At the time I was on a flight to Denver and the speaker was doing me a favor taking over my class. As the plane was about to land I got a text message from him (yes, I had my phone illegally turned on) that simply said, "You're dead!"

Now, I wouldn't advise doing this to just any old professor. This was a good friend of mine and I knew he would appreciate a Gude joke. The day before class I had tweeted my students a couple of times encouraging them to commit these outrageous acts whenever my friend spoke a certain word.

Now why would I do such a mean thing? Usually, when a class has a substitute teacher, students just ditch it. Or if they do come to class, they ignore the speaker and spend their time on Facebook. But this little joke caused them to not only attend class (who wouldn't want to miss the fun?) but also to listen intently to every single word the speaker said. Mission accomplished: class was packed and they did well on the quiz I gave later on the material.

More and more students have Twitter accounts now. Four years ago very few of them did and I would have to force them kicking and screaming to sign up (something they were always grateful for by semester's end).

Five (other) ways I use Twitter in my lecture classes:

1) It gives voice to the shy: Normally when I ask a question in a large class the same eager six students (sitting up front) answer them all semester. But, if you tell your class to tweet their answer to the class hashtag and then project the twitter feed onto the big screen, it's overwhelming the number of students who answer the question. I will then pick through them and students can view the ones I don't discuss later. They keep their answers pretty serious, too, since their answer is tied to their identity, but there is always the occasional joke, which we all chuckle over. Obviously, any student who wants to answer in person is happily called on!

2) Students can get answers from their classmates, not just me: Normally, if a student wants to clarify when an assignment is due, they would email me and I would respond. But with Twitter they tweet the question to the class hashtag and any student can answer (often before I do) and this benefits other students who might be wondering the same thing. All boats rise with the tide.

3) Students can only ask a short question and I can only give a short answer: In an email, students will ramble on and on explaining something like why they can't make it to class ("My brother's-friends-uncle's golden retriever that's been in the family for 12 years needs to be rushed to the vet for emergency bypass surgery and I'm the only one who has a car..."), but with Twitter they can only write 140 characters and I can only respond with 140 characters. Nice. Fast. Easy. Of course, if there is something too personal for Twitter, they email me. (No direct messages (DMs) from them since I don't follow them back. Too many!)

4) It's terrific for organizing group projects: Students can use the class hashtag to assemble a group to work on a class project. Then, they can create their own group hashtag for communicating with each other. I then ask them to post their hashtags on the class wiki which allows me to monitor their progress.

5) Students can share relevant links: Twitter is great for sharing links, and students love to share cool discoveries with each other. These links can be collected on a class wiki as a resource.

I would love to hear ways that you are using it in your classes!