For parents of newborns and toddlers, sleep is a constant topic of conversation and concern. By the time those babies turn into teenagers, though, most parents don't give sleep much thought, except maybe to marvel at how a kid who once bounced out of bed at dawn can now sleep past noon.

And yet sleep is just as critical for the still-growing brains and bodies of teenagers as it is in younger children. That's why in honor of the National Sleep Foundation's Sleep Awareness Week (March 6-13), the Start School Later team has rounded up some often overlooked facts about teen sleep, including some shareable messages you can quickly copy and paste to post on Facebook, Twitter, and LinkedIn all week long. 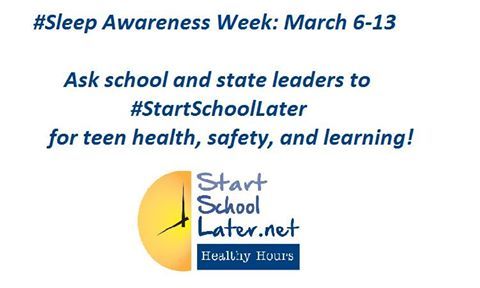 1. Teenagers are America's Most Sleep-Deprived Group

According to most sleep experts, the average teenager needs about 9 hours of sleep per night for healthy growth and functioning. Fewer than 10% of U.S. teens get that much on school nights, which is why teen sleep deprivation is often called a national public health epidemic. According to the Centers for Disease Control, nearly 2/3 of American high school students get under 8, and as many as 2/5 get 6 or fewer hours on school nights.

This is an epidemic with consequences that go far beyond nodding off in class. Chronic sleep loss in teenagers is associated with increased car crashes, depression, suicide, sports injuries, diabetes, substance abuse, risk-taking, and a host of other health and behavioral issues.

Sleep experts have determined a shift in sleep cycles (circadian rhythms) beginning at puberty that makes it more difficult to fall asleep as early as younger children or older adults. This biochemical change is seen in other mammals, so we can't just chalk it up to texting or poor discipline. Typical sleep cycles begin around 11 p.m. for teenagers and continue through 8 a.m.

Even a teenager "put to bed" at 8 or 9 p.m. may not be able to fall asleep until 11 p.m. An early alarm will cut sleep time down to 6-7 hours max, plus disrupt deep and restorative sleep.

3. The Morning Alarm Clock is One of the Biggest Culprits in Teen Sleep Loss

Most American teenagers have to wake well before sunrise to get to school on time. School bus pick-ups often start before the rooster crows, requiring students to wake before 5 a.m. in some cases to get to the bus stop on time. Other students, not only sleep-deprived but also new drivers, are driving themselves and their peers to school in the dark.

A typical 16-year-old would need to be sound asleep at 8 p.m. to get 9 hours of sleep before 5 a.m. - unlikely for both biological and cultural reasons. Combine that with the fact that teenagers need more sleep than adults, and an early alarm means that even teens who go to bed at reasonable times can't possibly get healthy sleep.

4. Most Schools Start Too Early To Give Teens a Chance of Healthy Sleep

To improve teen sleep, health, and learning, the Centers for Disease Control (CDC), the American Academy of Pediatrics (AAP), the National Association of School Nurses (NASN), and Society of Pediatric Nurses (SPN) have all called for middle and high schools to start after 8:30 a.m. And yet nearly 85% of U.S. middle and high school classes start class much earlier. Over 40% of U.S. high schools start class in the 7 a.m. hour or earlier (some as early as 6:50 a.m.!), and over 20% of U.S. middle schools at or before 7:45 a.m.

Other groups who have called for healthier school start times include the non-partisan Education Commission of the States, the American Sleep Association, and the American Thoracic Society. The Start School Later website includes a review of the research and a more complete list of health, education, and civic organizations who have called for later school start times. 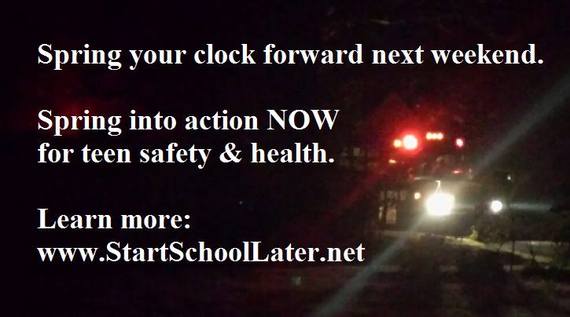 Social media often gets blamed for contributing to teen sleep problems. And, yes, too much texting, web surfing, or basking in artificial light, can indeed be a problem. But social media is also a great tool for social action, including action that will help improve everyone's chance for healthy sleep.

Below are sample messages that can be quickly copied and pasted for sharing on Facebook, Twitter, and LinkedIn during the week of March 6th-13th. If you write your own posts, consider the hashtags #StartSchoolLater and#SleepAwarenessWeek. 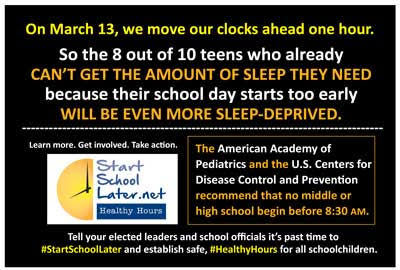