I had barely touched down in California when it was time to take off again. This time, to Detroit, to attend Netroots Nation, billed as the United States' biggest annual gathering of progressive activists, organizers and online social justice innovators.

My trip to the U.S from Ireland is thanks to a Fulbright fellowship that sees me based at the pioneering Citizen Engagement Lab in Berkeley. My research here looks at how we can collectively use the web to promote people power and build better democracies. I figured the trip to Netroots Nation was a must, something that could also help inform our work in establishing the Uplift campaigning organization in Ireland, which launches later this year.

So, with a guest ticket in my pocket (thanks Netroots!), I packed my bags and headed off to Detroit.

Here are five things I learned at Netroots Nation.

1. A new global superpower is being born.

Everywhere I went at Netroots Nation were incredible movers, shakers and world changers. These are people who are mostly in their twenties and thirties and leading organizations with the power to engage and mobilize millions of people through sophisticated online campaigning and organizing. They are birthing a new world superpower -- a digitally facilitated citizen superpower that offers hope for people and planet.

These groups are linking issues and allowing concerned citizens to join forces on issues that affect us all. They are harnessing the vast power of the web to promote real political reform, and improve women's rights, climate change action, immigration reform, Black, Asian and Latino rights, highlight corporate abuses, as well as championing other important causes.

They include groups like the Progressive Change Campaign Committee, Color of Change, 18 Million Rising, Sum of Us, Avaaz, 350.org, CREDO Action, UltraViolet, and members of the OPEN (Online Progressive Engagement Network), who have over 10 million members in more than 10 countries worldwide. (See a more complete list of groups on my blog here).

Such is their reach that no longer can these campaigners be dismissed as mere 'clicktivists' who don't know how to cut it in the real world of politics. These are serious players who know how to rapidly and cost effectively translate technological tools into funding, votes and lasting change.

Groups like MoveOn helped elect Obama. Demand Progress was instrumental in stopping the regressive SOPA bill. 38 Degrees helped prevent Britain's forests from being sold and GetUp! made history by changing Australia's electoral enrollment laws. In India, Jhatkaa!, led by 26-year-old activist Deepa Gupta, is trailblazing a powerful movement that is pressuring the government to take action on issues like rape culture, police brutality, and the pollution of the Ganga river.

The presence at Netroots Nation of numerous establishment politicians, including heavyweights like U.S Vice President Joe Biden and Congresswoman Elizabeth Warren, was testimony to the fact that these web activists have power, real power -- people power.

One of the highlights for many at the four day gathering was the keynote address by the firey Reverend Barber who brought the passion of his North Carolina based "Moral Mondays" movement to a crowd who often prefer their politics without spirituality.

The Reverend injected life and soul into issues that all too often hang out in the realm of the intellect. He helped connect head and heart. He uplifted, shifted and got people affirming their huge potential to change the world. There was little or no talk of religion, just calls to unity, to love, to higher ground. Nor was this just some entertaining preacher pumping the masses with feel good endorphins. Barber was sharp, cutting and clinical in his deconstruction of the political and economic inequalities that dehumanize us all. He was strategic but soulfully so. He breathed life into what Gandhi referred to as Satyagraha, or soul force, and reminded activists and organizers that technology is great but it ain't nothing if it isn't fueled by hearts, minds, soul and spirit, all working together.

Detroit is a city that has lost more than 1 million of its residents (or half its population) over the past 60 years. The decline of American motor manufacturing meant the city lost its industrial base, resulting in urban decline and more recently bankruptcy. Everywhere you look in Detroit there are empty buildings, urban decay, and signs of poverty, particularly among the Black community who make up over 80 percent of the population. In total, 39 percent of Detroiters live below the poverty line.

The strength of the motor lobby prevented Detroit from getting a public transportation system and it is claimed that all major national food chains have abandoned the city in recent years. Locals say racism and police brutality are widespread. Recently, thousands of residents have had their water supplies cut off, resulting in nurses referring to the situation as a public health emergency.

But there's another side to the Detroit story. It is the story of courage, determination and the refusal to give up. Detroiters are fighting back and welcoming newcomers to come join them. There are now an estimated 1400 urban farms and gardens in Detroit and people are innovating and creating community based solutions for a city that understands the harsh truth of capitalism more than most. 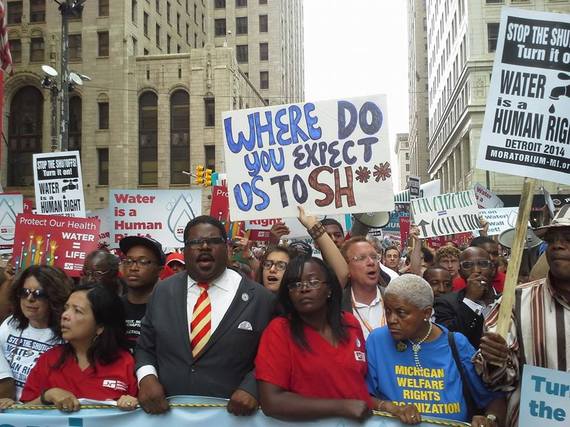 4. Taking it to the streets is still important.

As I joined a water rights protest in the city, I tasted the magic of what happens when online activism converges with the tradition of "taking it to the streets." Here parents, nurses and union activists marched side by side with web warriors who published live social media updates and action calls that rippled out to the world's media and politicians. These updates bombarded local and state politicians and led to stories in the Washington Post and elsewhere. The pressure has since led to a temporary suspension of the cut-offs.

While marching through Detroit's streets I was also reminded that while the web opens up the world to our campaigns, nothing can beat the energy injection of people coming together, face to face, side by side marching together, rising together. There is something about that deeper human connection that the web can't give us. It is something about seeing and feeling the power of community and having the realization that you are not alone in your worries, fears, hopes and dreams.

The modern world brings great benefits but often keeps us separate, boxed away in cubicles and in cars, on phones and laptops. It has the allure of connectivity and freedom, but in many ways cultivates separation and loneliness. Merging internet savvy with human connection gives us the best of both worlds, and opens up doorways to deeper change.

It can be easier to ignore emails than it is to ignore the sight and sounds of people demanding change. This is something Joe Biden knows. During his keynote speech, he was interrupted by the protests of young immigration campaigners from Presente and United We Dream who repeatedly chanted 'stop deporting our families'.

It can't have been an easy decision for the campaigners to make the stand they did, especially with so many of the crowd enamored by the Vice President. Nonetheless they managed to hit home a harsh reality to not only the Vice President, but to the progressive community. They also succeeded in getting their plight covered in major news networks worldwide.

The protests succeeded in reminding millions of people that immigration reform is a very real and urgent issue, particularly for the 11 million undocumented people in the U.S. Under the Obama-Biden administration, a staggering 2 million people have been deported. The protests were a poignant and strategic reminder that old school tactics might not always be polite or pretty, but they can be hugely effective. 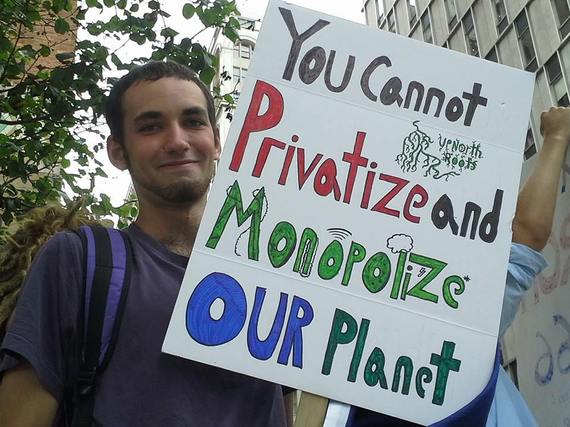 5. The future is bright.

At times it seems that the darkness of war, greed, injustice and prejudice is overwhelming. It is understandable why mental health problems are on the rise and why some people fall into the world of addiction, entertainment and endless consumption. "Ignorance is bliss" goes the saying, but it's not true. More people are waking up to this, realizing that collective action is the best medicine for despair. According to Reverend Barber, the slaves didn't know how they were going to free themselves, they just kept alive a vision of freedom, and so too must we.

Ruairí McKiernan is an Irish campaigner, social entrepreneur, and Presidential appointee to Ireland's Council of State. He is the founder of SpunOut.ie and a co-founder of Uplift, a new people powered campaigning organization that will launch soon. He is on Twitter and Facebook, and his website is www.ruairimckiernan.com

Member of Ireland's Council of State