I've been told that in the darkest nights, the brightest stars are seen. Five years ago, the BP Oil Spill in the Gulf of Mexico on April 20, 2010 was one of those nights.

The negative effects of this man-made, environmental disaster can be felt even today. However, the catastrophe mobilized people from all around the world to reach out and connect in order to help. Individuals of all ages displayed their support in a myriad of ways to aid man and animal alike. I was one of those moved to help. I started a fundraiser to help the birds impacted by the spill. Unbeknownst to me at 10 years old, my story would go viral and tens of thousands of people would rally behind me, allowing me to raise $200,000 to help birds affected by the oil spill and publish a book about my experience. Over the past five years, I've continued my work in different ways, and here are five things I've learned since the 2010 spill.

Everyone knows the classic underdog movies and books about that boy who was told he was "just a kid" and that he should "give up and go home," but somehow he saves the day in the end. There will always be that brazen side character who tries to silence the hero, but he overcomes it in the end. Although life isn't a flawless movie, anyone can make change. Regardless of the causes you support or what your strong suit is, everyone has an obligation to better the earth we've inherited. I am a key example of this and I stand as a testament to my motto, "Anyone can make change."

Since 2010, I've met all sorts of kids who have done amazing things, and others who want to make a difference. I tell them that if my voice could be heard in the sea of static, yours could be heard, too. When we sing our passions for all to hear, we inspire more to speak. With social networking at our fingertips, we can be heard louder and clearer. We can email a senator expressing the hazards of pesticides or we could sign a virtual petition. This way, our generation can advocate and support the directives we each have. You might not be as enthralled by the Galapagos finch as I am, but you may be exceptionally good at helping those afflicted with Lou Gehrig's Disease. The point is, we can each do something to help the world's problems.

2. The planet needs our help.

No matter what religion or culture you come from, everyone can admit our world is filled with overwhelming problems. The equilibrium that existed long before humans is thrown off. Species are going extinct at an alarming rate and vital ecosystems are being obliterated for short-term benefit. The environment's problems often seem too big to solve. However, the state of this imperfect planet can be overcome. We can challenge our situation and rise above it. The Earth we've inherited is crying for our help, and we must oblige. For our children, grandchildren and so on, we must fight the tide of deforestation and pollution. By utilizing our individual talents and altering our habits in little ways, we can create a cycle of change. We serve as an example to those around us, whether we know it or not. Doing a few simple acts gives others the courage to put themselves out there as well. For instance, you may make a point in your house to shut off all the lights when the room isn't in use. Your family or friends may pick up on this habit and do it themselves. Their peers will do the same, and more people will be conscious of energy consumption. This cycle can be repeated on a grander scale, such as cleaning a beach, establishing a recycling program or planting native plants. The world will still have problems, sure, but doing our part will make this beautiful, imperfect planet something to admire.

3. Politicians (and the people they represent) dislike change.

When people hear the environment is out of whack, they tend to shrug it off, try to disprove it or resist the changes required to improve it. During the past five years, I've visited Washington DC several times where I've spoken to members of Congress about alternative energy and bird conservation. I simply that the earth's habitat is in peril and oil spills don't help. While some of our representatives agreed with me and wanted to change the situation, others politely dismissed me because I'm not fully an adult and danced around the issue. Some were just rude and attacked my argument with fallacies and exaggerations. Before I get barraged with the 'it provides jobs' and 'the environment doesn't matter' argument, let me say this: no oil pipelines or hydrofracking will become the magic bullet to save the economy and our energy needs. Yes, renewable energy is flawed. However, it doesn't destroy the environment the way chemical leaks and oil spills do. Alternative energy solutions like solar panels provide jobs to engineers, contractors and architects and will reduce our carbon footprint.

The energy crisis that has gone on since my mother's childhood will only continue to worsen until we are out of oil. Instead of investing in polluting energy sources, people in political office should invest in what helps the world for the long-term benefit. Is the oil spill of 2010 fully behind us? Nobody mentions the long-lasting repercussions to the Gulf of Mexico as the spill slips into the recesses of old media coverage. In truth, the Gulf still suffers the effects of the spill. The chemical coagulants used to sink the crude material down to the ocean floor have created dead zones, eradicating any sea life there. Out of sight, out of mind? But daily news reports demonstrate the impact climate change is having on our daily lives. Weather charts and patterns around the world are becoming more unstable and erratic, and some still have the nerve to say, "Look at all this snow! Global warming is a fraud!"? Climate change is not a religion. You cannot just say you don't believe in it. An imperfect solution is better than wasting time and resources investing in an old idea. This crisis will continue unless we, and our leaders, choose to change.

People everywhere love to put in their earbuds and unwind with some music. However, people don't know that art can really change the world. Art exists because it shapes the way people think. Artists and musicians are remembered hundreds of years later. A simple bit of writing can change someone's day or give new perspective to his or her life. I am an example of the power of art, as my art gives me wings and carries me to places I couldn't have imagined before. Inspired by John James Audubon, my simple watercolors rallied people globally to help the dying wildlife in the Gulf. My illustrations inspired children and adults to take initiative in their own ways. I am the proof that creativity and expression does matter and can make a huge impact. Being a writer or a composer may be a little riskier than other professions, but you can change the world by expressing your ideas through art. 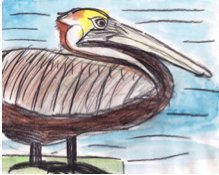 The first drawing I did for my fundraiser, a brown pelican, now hangs in National Audubon's Headquarters in NYC

5. Birds continue to amaze me!

My love of birds started this whole thing. They defy all odds and conquer gravity with agility and grace. Birds have more intelligence than we know and can sing beautifully. From their ability to fly to their quirky communication, these beautiful and colorful creatures are more diverse the more you learn about them. The thing that's so incredible about birds is the roles they play in nearly every ecosystem. Organisms rely on them to spread their seeds, be their prey, eat competition and much more. Birds occupy every continent and are recognizable globally. That is why birds are just so important, they sustain life here, as well as many other animals. In fact, every single animal plays a necessary role in keeping life alive on Earth. The only animal that isn't is us. However, we can change that and be better houseguest on this earth.

The world will have dark moments and tragedies; however it is up to us to shine our light in solving them. From our seemingly small daily decisions to more widespread action, everyone can be the voice of change. That is, perhaps, the most important lesson of all.