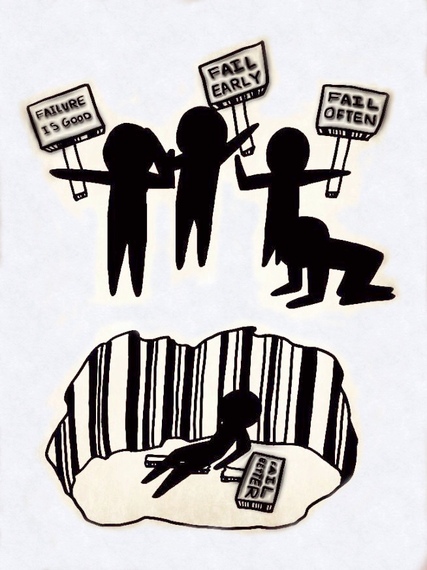 Here's a thought. How about we just stop with all of the marshmallow mantras about how failure is good? Failure is not some ethereal goal, and it's irresponsible to try to sell it as such. Failure means we got something wrong - sometimes a lot of things wrong. It means we lost, and if we're talking startups and entrepreneurship, when founders fail, so does the team, the investors and customers. Failure is lack of success. Look it up.

I understand the motives behind the attempts to rebrand failure as a positive; the stakes are high. The Kauffman Foundation recently reported "... new firm entry rates are actually falling and young firms are closing at higher rates than before." We definitely need to find ways to expand the pipeline, and it's good there are programs and a growing culture promoting entrepreneurship and innovation. But we really shouldn't be rebranding failure as a good thing as a reason to participate in anything, really.

But perhaps the real fallacy is that we often view certain experiences as failure when, really, they're not. I see failure as the absence of any option to move forward. Failure is not the moment of initial disappointment, the first sign of rejection or the first time something doesn't work out. Here are five things to consider:

Rejection is a Detour, Not a Roadblock
While I'd known my husband long before we started dating, when he decided that he wanted a first date with me, he had no idea I'd recently made the decision I didn't want to date anyone for a while. He and I were both attending a birthday party for a mutual friend. He spent the evening trying to get me to talk to him, and I spent the evening trying to avoid him. He didn't make it easy. He was charming, funny, witty ... and very persistent. When I rebuffed him, he acted like he didn't notice. When I got up and walked into another room, he followed. When I sat down in the last chair, he found another and set it beside me. He saw rejection as a detour, a challenge, not as a roadblock. Needless to say, he got that first date, and we were married a year later. That was almost 27 years ago, and it would have never happened if he hadn't viewed rejection as an opportunity to get to yes.

How hard do we try for something we want? If we lack tenacity, we could interpret a setback as failure and quit before we know if we could have been successful.

Not All Opportunities are a Good Match
I well remember the time I was invited to pitch to an organization that seemed like a perfect fit. And while the pitch itself when very well, it came completely off the rails during Q&A when I was forced to spend all the allotted time addressing a clear bias held by one individual on the panel. Even before I walked out, I knew the answer was no. It felt awful.

Sometimes biases, bad attitudes or things outside of our control will make it impossible to win. When that happens, it is imperative to review the experience to learn everything we can about what went wrong. After that, our only job is to put it behind and move on. Don't look back, don't waste time on the what-ifs, just move forward. Realize the experience has left us better prepared and more seasoned for the next time.

Disappointment is an Emotion
If I'm completely honest, I'll have to admit that I almost dread it when I discover I've been nominated for something. That may seem odd, especially when it means that someone out there believed I deserved it. But no one I know enjoys that horrible, sinking feeling of sitting in a crowded room as someone else's name is announced as the winner. It's not that we begrudge someone else the win, but that losing just feels awful. One thing to remember is that disappointment is an emotion that goes away. Instead, it helps focus on the fact that someone else believed in us and decide to believe a little more in ourselves.

When One Door Closes, Sometimes Better Opportunities Begin
Having doors close is a rite of passage as an entrepreneur. Not allowing it to derail us is what makes us tough enough to run a business and build something from nothing. And, sometimes, what begins as a lost opportunity results in new opportunities. When I applied - and wasn't selected - for the Women Innovate Mobile (WIM) Accelerator, it felt like defeat. But that rejected application instead created the opportunity for a new connection and eventually led to a wonderful friendship with the founder of that accelerator, J. Kelly Hoey. We can see a door closing as defeat or as an opportunity to expand our network and move forward another way.

Failure always feels bad. And, really, it should. But when we get the courage to put ourselves out there, win or lose, we are better for it. We expand our own tolerance for fear and risk, and that is so important. We also learn that we can survive disappointment and end up more committed to finding a way to move forward. Fear of failure is paralyzing, but the determination to avoid failure is catalyzing. And that's certainly more empowering than the marshmallow mantra that somehow failure is something we should do more often.