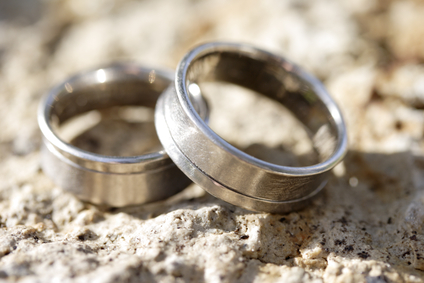 I am one of the fortunate who is living the truth of a song lyric, experiencing firsthand that "love is lovelier the second time around." Yet as happy as I am right now, I know the statistics on second marriages tell a different tale. Exact figures are a little slippery, but many experts estimate that about two-thirds of second marriages end in divorce. So, how can those of us who are in second marriages avoid a repeat performance? There are no guarantees, but here are some tips to help increase the chances of a successful second marriage.

1. Don't rush into it. That may sound like obvious advice, but, unfortunately, many people do rush into a second marriage and set themselves up for another heart ache. Whether it's to blot out the disappointment of divorce, to escape the loneliness of being single or to capture the excitement of a new relationship, moving too quickly is almost always a mistake. Time and distance are necessary for you to gain a clear perspective on what went wrong in your first marriage. As part of your postmortem exam, take an honest look at your own contributions to the breakdown of the relationship and also recognize those characteristics or behaviors that made you and your ex a bad match for each other. You need to be very clear about what to do differently to make your second marriage a success.

2. Don't have unrealistic expectations. Even the best marriage cannot be your sole source of happiness. No spouse should be expected to simultaneously fulfill the roles of lover, best friend, therapist and golf instructor. At least not all the time. Jerry Maguire's romantic ramblings notwithstanding, it's really not a good idea to expect a marriage to complete you. Surprisingly, second-timers can still harbor idealistic notions about relationships and put unreasonable pressure on their second marriage in an effort to redeem their dream of a "perfect" union. Avoid falling into this trap to give your marriage the best shot at succeeding.

3. Prepare to handle some baggage. Everyone brings some baggage into marriage, and those of us embarking on a second marriage tend to be toting a few extra pieces--children, former spouses, alimony and child support are some of the most typical, and they can put a lot of stress on a new marriage. Time, patience and money are often strained to the breaking point in second marriages due to the increased demands of blending two families. If the second marriage happens later in life, there may also be health concerns and costs that young couples don't typically face at the outset of their relationship. It's important for spouses to be honest about the challenges their second marriage faces and to be on the same page about how they will handle conflicts that arise.

4. React to the present and not the past. When your beloved says or does something that makes you see want to blast him or her into the stratosphere--don't! Take a moment to think before you react emotionally and do some real damage to your relationship. You are certainly allowed to object to your partner's words or actions, but before you do, 1) calm down and 2) be very sure that you are reacting to the present and not the past. Often a relatively benign remark your present spouse makes unconsciously triggers the memory of a not so benign remark your ex made and your anger gets displaced. You cannot hold your new spouse responsible for the sins of your ex. Don't lump them together and don't expect your present partner to do penance for the hurt the former one caused.

5. Compromise is still the name of the game. This is one of the more subtle challenges that sometimes arises in a second marriage. The older we get, the more that compromising can feel like giving up control of our lives to someone else. Especially in our culture, where we are urged to be "authentic " and not to let anyone change who we are, bending to someone else's will can register on an emotional level as sacrificing a part of our identity. Those who have come out of very controlling relationships where their identity was completely merged with the other person's can be particularly sensitive to this issue. Yet cooperation and compromise are essential components of a successful marriage and must be cultivated. The key is to build a strong foundation of trust first so that compromise is viewed not as a loss of control, but rather as the contribution each party makes to the success of the marriage.

Real life is a lot more complicated than fairy tales, but with love and commitment you can create a happy ending for your second-time-around love story. Here's to happily ever after!