Over decades of international gift-giving I've gathered a few pointers which might put more ho than humbug into your holidays if internationals are on your list. My motto is, "Be generous, but appropriate." Here's how: 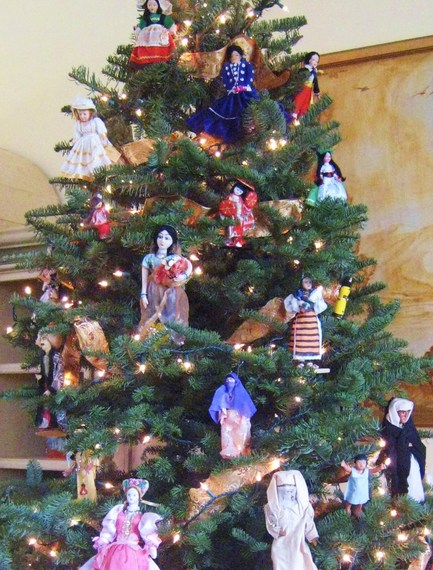 We've heard of inappropriate NGO gifts that ended up wasted, or wreaking havoc like the Coke bottle spoofed in "The Gods Must Be Crazy." In real life, the gift of a bicycle destroyed a village economy, and powdered milk given to an area of lactose intolerance ended up as whitewash.

But with today's global economy, NGOs aren't the only ones giving gifts across cultural barriers. We could all make mistakes.

If anthropologists and my friends living there are right, Papua New Guinea probably takes the fruit cake for gifts' hidden implications. A single gift could set you up as a Big Man - a patron of sorts who becomes responsible for the welfare of the recipient. Who saw that coming?

Pallid in comparison is the warning I received from the leaders of my first NGO trip, when I was 19. The setting was a summer English language camp at a college in Taiwan, where I was a language coach. I adored the island's mixture of the exotic tropics with classical Chinese culture. The snails were gigantic, the students polite and loveable; and it was before the US market had become flooded with Chinese wares. Little whatnots, mostly red, had come my way from the students, and I had given a few tokens in return.

"If you accept their gifts," my jaded seniors warned, "it means you will be expected to house them when they come to America."

Ok - that squirt some sour into the sweet pork sauce, but I couldn't imagine it actually happening. Well, it did happen. A number of years later one of the students visited, lived with my parents for several months while I was away at school, and even worked in our business!

But the "obligation" turned out to be a blessing. We have been friends for many years now. My Taiwanese friend has offered to return the favor and train my children in her factories, and she has educated me on her culture and branch of Buddhism.

You wouldn't want to give pork or alcohol to a Muslim. But a curious situation arose with my son this year on business in India. One leg was in the predominantly Muslim, alcohol-free state of Gujarat. He discovered to his surprise that alcohol actually can be purchased there in controlled dispensaries, under specified conditions.

While traveling to an appointment, his Muslim and Hindu associates made an unplanned stop. My son's international credentials had to be shown. There were tense negotiations in an Indian language which he could not understand. A supervisor was called. Suspicious glances were cast at his innocent-appearing face.

Afterward, he found the supervisor had been told that being foreign he needed alcohol - and plenty of it! His associates had used his credentials to purchase "business gifts" of alcohol- a coveted but forbidden liquid in that dry state.

Tip #2: Beware of Coals to Newcastle

This old adage about not giving something there is already too much of, often applies to international gifting. For example, I offered some nice Japanese pieces from one of my collections to a business associate who visits from Japan a few times a year. He and his wife surprised me by preferring my non-Japanese pieces.

On the other hand, I have found American nuts, olives, and dried fruits to be quite appreciated by my Middle Eastern associates, because they are practically dietary staples.

Simplicity dictates that we keep only what we believe to be beautiful or know to be useful. I like the sound of that. However, I agree with the English aristocrat who said that good taste should not exclude sentiment. The gifts you may receive from your international friends might not reflect your taste; but more importantly, they reflect your life and priorities. You might even get lucky if a theme emerges over time: I ended up with a lovely collection of inlaid boxes.

Remember a souvenir you picked up to remind you of a place you enjoyed? Perhaps a memorable meal or a photograph in a recognizable setting?

Just as we like something typical of a place, so do our international friends. America imports so much it's not always easy to "buy American," but with a little thought we can succeed.

Think - what is typical of where you live?

Having inhabited most zones of America, I've found regional goodies that are big hits. From the agricultural wonderland of California, nuts and fruits reign; from the North and Northwest marionberry or huckleberry jam - and don't forget to describe the risk of bear attacks with huckleberries! New England maple syrup is tasty and fun to explain; and peanuts, peaches, or pralines evoke the South. European students, among others, are attracted to the simple authenticity of wildflowers and leaves from the Rocky Mountains. Find them preserved in jewelry and ornaments, as are maile leaves from Hawaii.

For something a little pricier and unique to America, I give Native American Southwest jewelry. Our styles, craftsmanship, and varieties of turquoise are as outstanding as the prices are high, in comparison to a country with cheap handcrafts. So in such cases your bang for the buck could be small. But it might be worth it, especially if you explain the jewelry's origin.

Sometimes advising where things are available, or being a personal shopper can greatly help an international. Take the example of a Kuwaiti student who was going home right after finals. She was excited to find I knew of a discount store that sold American-made clothing. Since I had more time than she did that week I offered to shop for her. This is how: I went to the store, took and texted a few dozen photos of styles and sizes, bought the ones she thought likely prospects, and let her shop out of my trunk - like an old time haberdasher! The losers I later returned.

What I like about giving to internationals is the chance to be hospitable in a personal way that enhances their view of America and Americans. I don't think of or want reciprocation; but I don't want to be patronizing either. We give honor when we receive.

Consider this situation. I met a woman from the Persian Gulf at a several day professional conference in San Francisco this year. During breaks we exchanged thoughts on the presentations, and details of our lives on opposite sides of the globe.

The last day of the conference I zipped out at lunch thinking, "I want to bless her with a surprise! Something typical from San Francisco." So before we parted I gave her a loaf of Boudin sourdough bread - I told her the story of its Gold Rush origins - and Ghirardelli chocolates in a cable car tin. It wasn't much, but it fit with my "give local" rule, and I was pleased. Graciously, this hijab-wearing doctor accepted. Then she offered me a gift in return.

But I wanted to be the generous one! That had been the plan. I resisted to the point of offense, but rather than cause an international incident, I complied. A white bag with golden Arabic printing came into my possession. Then, like Santa, my new friend dashed off to catch her flight back to the Middle East.

Alone now, I opened the bag. Inside was a glossy red box. I pulled it out and flipped opened the lid. Glistening within was a double-stranded bracelet of real pearls. Pearls - the traditional treasure of the Persian Gulf, sought after for millennia. And so, I had exchanged bread and chocolate for treasure, with someone beyond price.