John Cusack made his name as an actor in romantic comedies like "Say Anything," "High Fidelity" and "Grosse Pointe Blank," but that doesn't mean he's onboard with the current state of big-screen romances.

"I don’t know what they make in Hollywood, but they don’t really make good romantic comedies anymore," Cusack said during a Q&A at the Los Angeles Times Festival of Books last week.

Perhaps he just needs to check out "The Five-Year Engagement," the new film from producer Judd Apatow. Out now after almost four years in development, the romantic comedy is a shaggy-dog throwback to the classics of yore: "When Harry Met Sally," "Broadcast News" and, of course, "Annie Hall."

Co-written by star Jason Segel and Nicholas Stoller and directed by Stoller -- the pair previously worked together on another great modern-day romance, "Forgetting Sarah Marshall" -- "The Five-Year Engagement" follows Tom (Segel) and Violet (a luminous Emily Blunt) through the ups and downs of their half-decade trek to the altar.

If "The Five-Year Engagement" feels at all worthy of comparison to some of those aforementioned favorites, that's because Stoller really went to school on what made them work.

"I watched some of the comedies we were trying to emulate -- 'When Harry Met Sally,' 'Annie Hall,' 'Broadcast News,' 'Terms of Endearment.' I kinda did nerdy graphs of all of them and wrote down what was happening in each scene," Stoller told HuffPost Entertainment. What he found was somewhat eye-opening.

"All those movies feel a bit like they're wandering," he said, which recalls a common critique of Apatow-branded comedies. "You're never bored, but they don't feel like traditionally plotted movies. But they are tightly plotted. They're constantly repeating their themes, over and over again, in different ways. We did that in this movie: we're constantly repeating the idea, 'Are you ready?'"

That question gets asked of Tom and Violet throughout, mostly via a Greek chorus of supporting players from Violet's sister (Alison Brie) to her mother (Jacki Weaver) to Tom's parents (Mimi Kennedy and David Paymer). It also leads to some uncomfortable answers for the couple, which makes "Engagement" much less sunny than your average romcom.

"'When Harry Met Sally' is kind of a dark movie," Stoller said. "It's sweet and it ends beautifully and romantic, but those are two pretty messed up characters. They're pretty flawed. They do pretty nasty things to each other. It goes to a dark, pretty real place between them. That's why it's a classic. [Screenwriter] Nora Ephron does not pull her punches in that movie."

Stoller doesn't either in his film, perhaps because of a conversation he had with Ephron before embarking on "Engagement."

"She had two things," Stoller said of his meeting with Ephron, who he calls an "idol." "One, was she splits her movies up into eight chapters. And she said, 'Don't repeat a chapter.' There's a different plot move happening in each chapter. She said, 'If a chapter is repetitive, be hard on the chapter. Make sure it's moving your story forward. Question whether it's moving the story forward.' That was one."

And the second one?

"We ended up not doing this, but it forced me to think about the movie in a certain way. She said Mike Nichols told her to start the movie with a visual metaphor."

For example, Stoller recalled how Nichols used an image of the Statue of Liberty at the beginning of "Working Girl" to signify that it was a story about a woman taking over New York. What was his discarded metaphor for "The Five-Year Engagement"?

"I was going to have them driving in San Francisco through fog. As they walk out to get engaged, the fog starts to dissipate. Like they kinda can't see their future," he said. That theme was going to come back around at the end of the film, too, but Stoller just wasn't feeling it.

"I liked it not being foggy for aesthetic reasons."

"The Five-Year Engagement" is out in theaters now.

PHOTOS From The Premiere Of "The Five-Year Engagement" 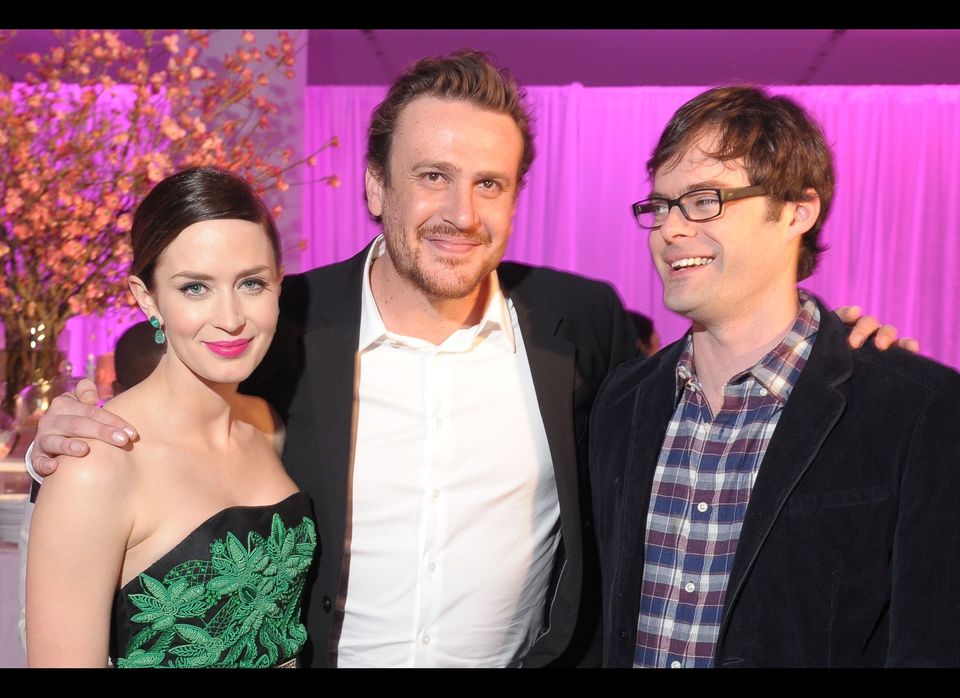