Over the past four years, The New York Times' Nate Silver has become something of an ascendant star in cyber space. In 2009, Time magazine named him one of "The World's 100 Most Influential People" for his website FiveThirtyEight.com, which, of course, was picked up by the Times in June the following year.

As someone who took graduate school courses in statistics--including an advanced course in debunking quantitative methodologies--I've come to appreciate the complex statistical modeling that Silver has developed for predicting national and state elections in the U.S. In 2008, he famously predicted the outcome of the presidential election (and 49 out of 50 states) and all 35 Senate races that year.

Of course, his read of the American political horizon is often hazy, to put it politely. In October of last year, he had Rick Perry as a 50-50 shot to beat Romney in the Republican primaries. (I guess there were no numbers in the Silver model for imbecilic goofiness and stupidity.)

Silver's commitment to a quantitative, value-free approach to the living, breathing universe--not only in politics, but in sports, entertainment, even dating--with an emphasis on numbers can be troubling, to the point of absurdity, when the answers have nothing to do with statistical equations. 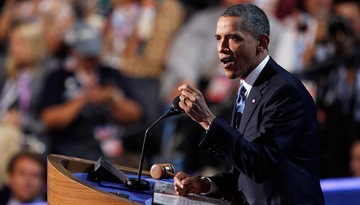 A great speech is more than the sum of its parts. Don't think Obama met that standard...

Really? And who is Nate Silver to make a judgment that went counter not only to those in attendance at the Time Warner Cable Arena--where tears flowed freely and the atmosphere both inside and outside the arena was electric--but to virtually every other commentator who responded to Obama's speech? Even Steve Schmidt, the Republican field general of John McCain's 2008 campaign, called it "powerful...just an amazing performance."

Note that Silver tried to apply a quasi-statistical analysis to Obama's oratory by referring to the "sum of its parts." His tweets about the Democratic Convention were consistently shallow, cynical, snarky, and perhaps, most significantly, they weren't all that astute nor accurate. Not once did you ever get the sense that he was moved by any of the proceedings. Tears and emotions never flow from a mathematical equation.

Just this past month, when asked on CNN about Todd Akin's "legitimate rape" remarks, Silver responded: "I do know this is not the type of issue the Republicans want to be talking about when you have an unemployment rate above eight percent." Where's the moral outrage? He immediately juxtaposed the Akin remark with an economic statistic. Does this guy have no soul?

Last November (ten short months ago), Silver published a piece in the Times Sunday Magazine entitled "Is Obama Toast?," in which he chided the president for handling the debt-ceiling debates "so poorly" and concluded that Obama was "a slight underdog"--all before the Republicans had even selected their presidential nominee. He even declared that Obama had an "African American problem," meaning that Obama's favorability rating among black Americans was "down." Say what? I guess he didn't predict the most recent NBC/Wall Street Journal poll, in which Romney got 0% of the African American vote. Nada. To borrow a phrase from Bill Clinton, the kid's got brass.

Here's a guy who's never been centrally involved in a national election, whose political acumen comes from a calculator, and, who, I am willing to bet (and I haven't seen the numbers) has never organized a precinct in his life, much less walked one, pontificating about the dynamics in the electoral processes as if he actually understood them.

Moreover, in what was a thoroughly bizarre use of the first-person plural (does young Nate really think he's talking for me?), Silver declared: "[W]e have concerns, which have been growing over time, about whether [Obama's] up to the job." (Honestly, Nate, I never had those concerns; I realize that this is a job tougher than managing the Boston Red Sox.) He went further: "[E]nough of us are prepared to vote against Obama that he could easily lose."

How he came to that conclusion, particularly about me, I'll never know, because I wasn't polled and I wasn't asked. The arrogance of his use of the first-person plural in that article was astounding. But even more was his assertion that the predilections of American voters--the deep, profound feelings they hold in their hearts--could be "quantified" by a numbers wonk like Silver.

Silver took a of good deal of well-deserved criticism for his Obama article--as well he should have. Jim Messina, President Obama's 2012 campaign manager, sent out an email to Obama supporters taking Silver to task for asserting that "neither you nor Barack Obama has a role to play in this election, because the outcome is essentially predetermined."

Yesterday, Silver posted a bizarre piece in which he queried "Is Bad Weather Really the Reason to Move Obama's Speech Indoors?" It was straight out of the right-wing blogosphere.

His conclusion was that since there was a 30 percent chance of rain four years ago in Denver and that there was a similar chance of rain in Charlotte this year (actually it was 40 percent), that "skepticism is warranted" about why Obama's speech was moved inside--his implication being that Democrats didn't think Obama could fill the outdoor stadium.

Read the piece. It is absolutely deceitful in its statistical argument. A summer rain shower in Denver is much different than a summer storm in Charlotte. There's a far different humidity and far different temperatures. And entirely different type of thunder storms, too. In other words, it's an apples and oranges equation--a false quantitative parallel. And in the hours leading up to Obama's speech, a hot summer deluge drenched Charlotte.

And that's my problem with Silver. When he strays from his election modeling, he often puts his foot into one of his orifices. He did the same thing with baseball. It's obvious to me that Silver can't appreciate a great speech when it hits him in the face. He doesn't understand that when there's a runner on second and two out, you want Derek Jeter at the plate--I don't care what the numbers tell you--simply because it's Derek Jeter.

And, of course, ten months later Silver is now predicting that "Obama Would Be Big Favorite With 'Fired Up' Base." Gee, ya think so?

Ah, the numbers didn't calculate for the "fired up" part, did they kid? Or the Bill Clinton factor? Or the Lyin' Ryan narrative? Or Derek Jeter batting .318 at the age of 38? One of the great rules of statistics is that numbers do not a crystal ball make.

Tonight, while Nate Silver is working on his calculator, I'll be at the Giants-Dodger game in San Francisco with my son watching a real game get played in the battle for the National League West. I don't care what the sabermetric guys say about Tim Lincecum, I'm going with my guy because I feel it in my heart.

The real game of baseball--just like American politics--is played on real dirt with real people. Not numbers. And that's why they play the game. Anytime young Nate wants to take some grounders at third base, with a real ball and real glove, I'd be happy to oblige. I'll let Obama school him at the rostrum.