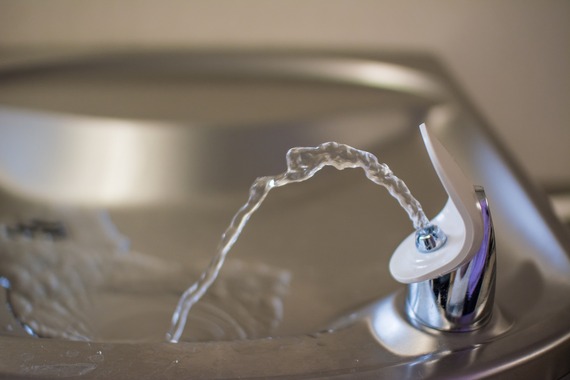 Let's face it: our water infrastructure is crumbling. The American Society of Civil Engineers estimates that there are 240,000 water main breaks in the United States each year, averaging to about 700 each day. Leaky water pipes and other water waste accounts for the loss of an estimated 7 billion gallons of clean drinking water each day.

Meanwhile, there are as many as 10 million lead service lines that connect water mains to homes and public buildings such as schools and hospitals across the country. The information about where these pipes are, and their potential for leaching lead is largely unknown. Across the U.S. there are over 90,000 schools and over 500,000 childcare facilities that aren't required to test their water for lead; potentially leaving America's most vulnerable citizens--our children--exposed to lead poisoning.

The communities exposed to the potential consequences of lead poisoning are increasingly coming into focus. Cities like Washington, D.C. and Newark, New Jersey, are taking action to address elevated lead levels in their school water supplies. The health effects of lead poisoning are dire and long-lasting, affecting many generations of a community. Decreased cognitive function in children, premature birth, cardiovascular disease, and decreased kidney function are just some of the consequences of drinking lead-contaminated water.

We would be remiss not to mention that repairing America's water infrastructure would create and sustain quality jobs across the country. Every $1 invested in upgrading water infrastructure in America result in increases by more than $3 to national economic benefits(accounting for multiplier effects of activity through all sectors of the economy).

In the wake of the events in Flint, the U.S. Senate Environmental, and Public Works Committee took action to help repair water infrastructure in communities across the nation--recently approving legislation to reauthorize the Water Resources Development Act or WRDA. This bill includes innovative provisions to ensure clean drinking water and to provide effective action to address lead contamination in Flint and around the country. The bill builds out a comprehensive plan that recommits the federal government to a critical role in water infrastructure investment, lead remediation and the strong drinking water protections provided by the Environmental Protection Agency (EPA).

The House Transportation and Infrastructure Committee this week approved their version reauthorizing WRDA, a bill that now heads to the House floor. But this bill falls short in addressing water infrastructure issues. It is critical that the final WRDA legislation addresses drinking water infrastructure in addition to investing in ports and protecting waterways, and keeps in place measures to ensure advanced U.S.- made materials are used in federally funded water projects and those efforts pay American workers fair wages.

Fixing our water infrastructure will ensure all Americans have access to clean, safe drinking water, will protect public health, and will create good jobs rebuilding the systems meeting our nation's water needs. Congress needs, now more than ever, to work together to pass a strong WRDA bill with critical infrastructure investments.

If we don't do something now, the problem is only going to get worse. The question is: how much worse does it need to get?

Executive Director of the BlueGreen Alliance