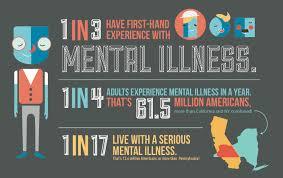 Martin was 20 years old when he was arrested for the second time. Responding to auditory hallucinations, his aggressive behaviors endangered people on the street and in his apartment building. While incarcerated at Rikers Island (New York City's now infamous jail, where thousands of others with serious mental illness reside), he received antipsychotic medication. When released, however, he discontinued the medication and became ill again, reoffended and ended up with a lengthy stay at an upstate prison. Life there fostered survival-based antisocial behaviors that would make community reintegration even more problematic upon release.

Louise developed schizophrenia at age 18. Her illness progressed. She refused mental health treatment, became disruptive at home, and was hospitalized on a general hospital psychiatric unit. After discharge she refused treatment and began living on the streets, moving from shelter to shelter. By the time she was 35 years old, she suffered from severe hypertension, uncontrolled diabetes, and emphysema. She would visit a local emergency room once or twice a month. Sometimes she was hospitalized for either medical or psychiatric care; exposure to the elements and her lack of self-care were taking their toll. She looked 20 years older than her age and was at high risk for more illness and an early death.

Frank had been a successful attorney until he experienced a severe episode of clinical depression at age 45. He was reluctant to seek mental health treatment, without which his primary care physician and family believed his career could not last. They were right: He was unable to work and went on disability. After seven more years of severe depression and feeling hopeless about his future, he hung himself in the basement of his home.
..............

One of the great public health challenges in America today is that of untreated and poorly treated serious mental illness. Millions of Americans, and their families, lack access to or receive poor quality care -- the hallmarks of a broken mental health system. Jails and prisons have become principal places where many people with chronic mental illness arrive in the absence of alternatives. Many homeless individuals suffer from untreated serious mental, addictive, and chronic physical health problems resulting in great suffering as well as great strain on medical services and state medical assistance budgets. Because of stigma, or an inability to know that they are ill, or troubling experiences with mental health services they do not seek or follow through with treatment.

The legal, medical, and social service safety net for people with serious mental disorders has become so frayed that it often seems non-existent (1).

What should be done?

Access to humane mental health and substance use treatment must be provided in local, community-based treatment settings, not jails or prisons, nursing homes, shelters, or long-term hospitals. The mental health 'system', such as it is, needs to be re-engineered to deliver alternatives to inpatient care such as intensive community treatment teams and crisis services. Court-mandated outpatient and inpatient treatment should be available for those so ill they are at risk to 'die with their rights on.'

Patients and families must come first, not the convenience of providers and payers. Patients do best, especially with chronic conditions, when they are informed, supported, and held responsible for their lives and health, which calls for a genuine partnership among, patients, families, and clinicians (2). Treatment must be comprehensive and continuous to control any chronic disease; for mental and addictive disorders that means psychotherapy, skill building, and rehabilitation services; wellness management; and medications. Nothing less is sufficient -- or works.

The fields of psychiatry and mental health have many evidence-based practices for people with serious mental illness. There is robust scientific evidence that case management, including health coaches and peer counselors, reduces the use of emergency acute services by people with serious mental illness and improves their lives. Existing Federal privacy laws also need to be better understood and updated so that families can do what they want more than anything, to help loved ones get the care that will save their lives and enable a quality existence in the community. Programs diverting individuals from jails and prisons, including specialized mental health and drug courts should be the rule, not the exception.

Families, as well, can serve as the early warning system for signs of a member's recurring symptoms and early relapse.

The Helping Families in Mental Health Crisis Act (HR 3717, 113th Congress), a bipartisan bill introduced by Congressman Timothy Murphy, Ph.D. (R-Pennsylvania and a trained psychologist), offers needed, overdue direction for reforming mental health care. The time to pass this legislation is now so that we can repair a broken system and deliver opportunities for healing and recovery for tens of millions of people in this country.

It has been said that measure of a society is its humane attention to the sick and vulnerable. When real reform, transformation, comes to mental health and addiction services we will meet that moral and ethical standard -- and we will be able to serve so many in need.

Dr. Sharfstein is President and CEO of the Sheppard Pratt Health System and Clinical Professor at the University Of Maryland School Of Medicine, Baltimore, MD.

The Family Guide to Mental Health Care
by Lloyd I. Sederer MD