The Colorado River, recently named America's most endangered river, supports millions of people in the American Southwest and northwest Mexico and helps irrigate millions of acres of land. It is shared by seven states in the U.S. and Mexico, through a complex series of legal agreements and treaties.

Yet every drop of water on the river is accounted for, used, reused, and transpired away, and today, no water reaches the Colorado River delta in an average year. Quite simply, demands on the river exceed the river's average supply, and this problem is projected to get worse as populations continue to grow and as climate changes increase temperatures and reduce runoff.

Today, irrigated agriculture consumes more than 70 percent of the water supply within the Colorado River basin. For the first time, new research from the Pacific Institute presents comprehensive data on the extent of irrigated agriculture throughout the seven Colorado River basin states and two additional states in Mexico, the types of crops grown, and the amount of water used to grow these crops. 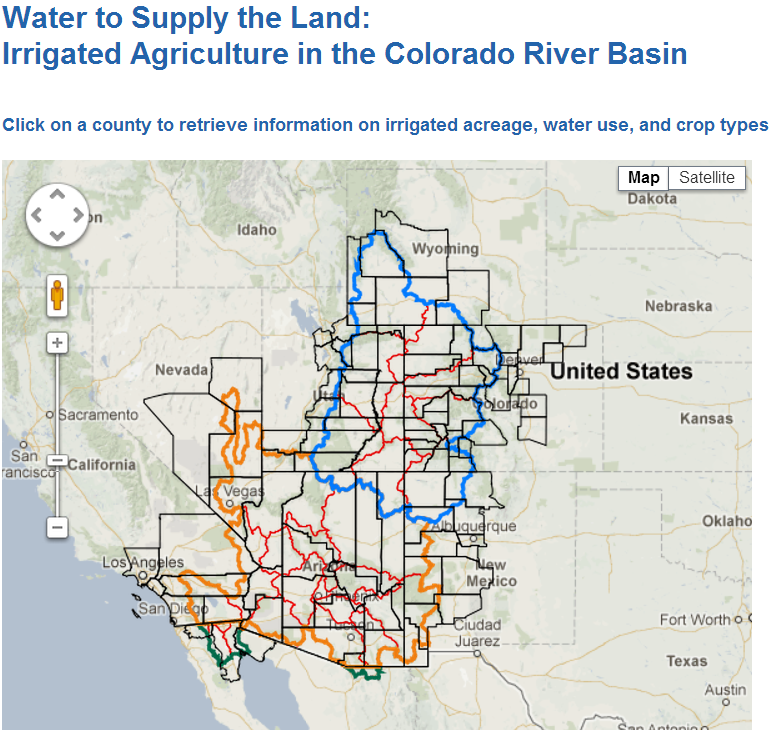 Click here to visit our interactive map of Colorado River basin agriculture, showing federal and state agency information on the amount of irrigated and total harvested acreage in the basin by county, and total reported water use as reported by USGS.

The report shows that more than 90 percent of pasture and cropland in the 256,000-square-mile Colorado River Basin requires irrigation, with about 60 percent of the irrigated acreage devoted to pasture, alfalfa, and other forage crops used to feed cattle and horses. These forage crops consume about 5 million acre-feet per year, equivalent to a third of the river's annual flow.

Innovative irrigation techniques, which many farmers around the world are already using, can help ensure continued agricultural production, while cutting water demands, even in the fact of the growing threat of climate change.

The new study evaluates specific water-efficiency strategies, including regulated deficit irrigation, crop shifting, and advanced irrigation technologies. The Institute's results show considerable water savings are possible. For example, almost a million acre-feet of water may be saved cheaply and quickly by irrigating alfalfa less often (a practice known as "regulated deficit irrigation"), at an estimated base cost of approximately $81 per acre-foot.

Other scenarios, such as shifting to less water-intensive crops, also yield impressive water savings at relatively low costs and without reducing the total amount of irrigated acreage in the basin. For example, replacing about 10% of the basin's irrigated alfalfa acreage with cotton and wheat could save about 250,000 acre-feet of consumptive water use each year, with estimated base costs of less than $40 per acre-foot. Total reductions in water withdrawals and applied water would be even greater.

We know water supply and demand don't match up and it will get worse going forward. We know there is much that can be done; the question is how much and where, and how to get there. This analysis improves understanding of crop acreages and water use in the basin and offers a set of plausible scenarios in which some of the water currently devoted to irrigation could be conserved and used for other purposes - without taking agricultural land out of production.

Dr. Juliet Christian-Smith, a report co-author, observed that the water management techniques proposed in the study are proven. She says that if efforts are made to expand use of them in the western U.S. it:

could generate significant consumptive use water savings that could be transferred to other users. This report considers different alternative futures and it is important to develop the right incentives to encourage more efficient water use as the gap between water supply and demand grows.

It is time to get serious about returning the Colorado River basin to even a semblance of hydrologic balance.

[A version of this post is also available at Peter Gleick's National Geographic ScienceBlogs "Significant Figures."]