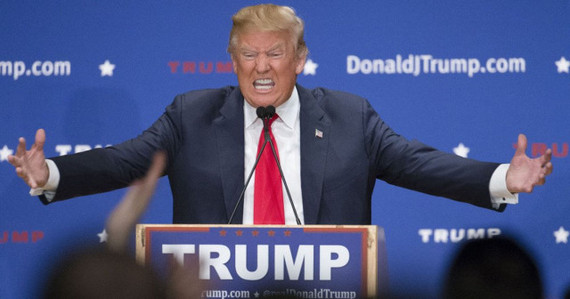 Fuck you Trump. In just a little over a week into your (or should we say Steve Bannon's) nascent presidency, you've already managed to create chaos at home and abroad. You've angered members of your own cabinet, Congress, Republican leadership, the media and have fostered an early atmosphere of contention among White House staffers. Overseas, you've pissed off our allies, ignited trade war talk, incited terrorists and are threatening global stability. You're an incompetent, malevolent, horrible leader.

But fuck you, Trump. We are not frightened by you. Not because we feel comforted by the protections of the Constitution or from our system of checks and balances and due process, but rather because we the people own you. We pay you and you work for us. We have all the power, not you. You're not living in Trump Tower anymore. You're in the people's house now. To paraphrase Sting, every breath you take, every move you make, every bond you break, every step you take, every single day, every word you say, every game you play, every night you stay, we are watching you. And we will do anything and everything in our power to marginalize you and ultimately kick you out of our house.

We will not tolerate your sexist, xenophobic, racist views and policies. We will not allow bans or registries or discrimination of people based on race and religion. We will not legitimize your alternative facts, fake news and faux hysteria to manipulate the masses and justify your abhorrent behavior. We will not allow you to use the presidency to feed your rapacious Id and enrich your wallet.

We will be your worst enemy. Worse than Vladimir Putin, Kim Jong Un and Bashir al-Assad combined. Because we are the American people, and we will never allow a self-serving fascist dictator to destroy our beloved democracy.

You are a tyrant, and there's no place in America for tyranny.

So, fuck you, Trump. America is so much better than you.