There's been much ado about flag pins lately — who wears them, who doesn't, and whether that means you are patriotic enough to be president. Last week during ABC's now-infamous debate, moderators Charlie Gibson and George Stephanopoulous included this question from totally random Pennsylvanian Nash McCabe:

"Senator Obama, I have a question, and I want to know if you believe in the American flag. I am not questioning your patriotism, but all our servicemen, policemen and EMS wear the flag. I want to know why you don't."

Nope, no questioning of the patriotism at all! Gibson followed up wondering, "How do you convince Democrats that this would not be a vulnerability?" Because clearly, wearing a flag pin is an excellent indication that you are patriotic, and the non-wearing of said pin is a sure indication of your scorn for the flag. Since this keeps on popping up again and again, ETP decided to look at a random day in the news cycle (pre-primary Monday) and see just how patriotic the media, candidates, and various people orbiting the campaign actually are — and who wears their hatred of America as surely as an unencumbered lapel.

We'll start with Fox News, because some people on that network were particularly exercised after Obama explained in October 2007 that he didn't wear a flag pin, instead aspiring to do patriotic acts that spoke for themselves: 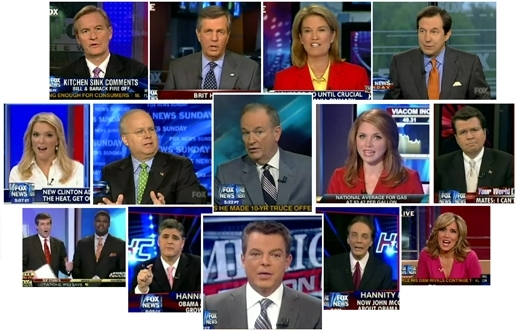 Talk about your Fox and Friends! We've got the whole gang here...and three of them don't hate America! Fox is the winner in flag pinnery, with the small metallic symbol of pride glimmering on the manly chests of Brit Hume, Neil Cavuto and special analyst Karl Rove, who has lots of opinions on the subject. But that still leaves people like Steve Doocy, Greta Van Sustern, Sean Hannity, Megyn Kelly, Jenna Lee, Alisyn Camerota and two guys I can't name from Fox Business flag-less. You'd expect no less from Alan Colmes, really, but golden boy Shep Smith? What's the opposite of a patriot, Bill O'Reilly? Oh, right. Note that Chris Wallace has previously said that he sort of agrees with Obama's flag-pin theory; we bet Brian Kilmeade would find that reasonable.

Well, what about the godless liberals at MSNBC, and their NBC brethren? 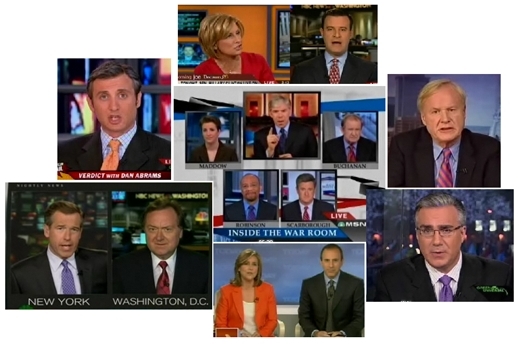 Wow, a clean sweep; that is to say, 0 for the random 14 we selected. (Thanks to "Race for the White House" for inspiring our montage design!). Bill O'Reilly could have told you so. Sorry, Brian Williams — that Peabody will only get you so far. Same goes for you, former Congressman Joe Scarborough and former Presidential candidate Pat Buchanan and other people orbiting David Gregory's head. For shame.

MSNBC may be locked in a ratings race with CNN, but they clearly lose the flag pin race, thanks to patriot Lou Dobbs. See below: 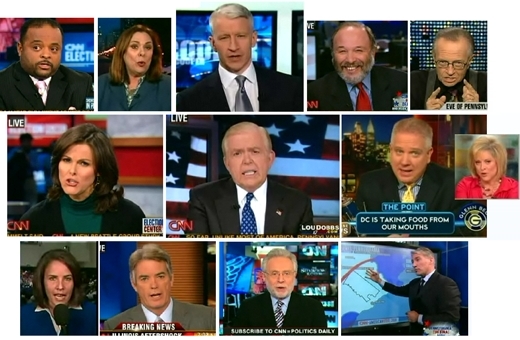 Lou Dobbs is taking no chances on that flag thing, btw — wearing it on you is made that much more patriotic by having it waving around you as a lofty backdrop (though to be fair, that gives the MSNBC "Morning Joe" crew a lift thanks to the background visuals of Rock Center in the a.m.). But otherwise, it's a fairly rag-tag bunch — John Roberts may be excused because he's Canadian, and Joe Klein's just in there because he looks so damn excited, but pride-of-network Anderson Cooper? Bearer of tradition Larry King? Stalwart defender of truth and justice Nancy Grace? Hey John King, what does your Magic Wall have to say about the demographic of Americans Who Hate America And Prove It By Not Wearing A Flag Pin? Yeah. We thought so. As for you, Glenn Beck — we really thought you cared. It must have been that book cover where you eat California.

Back to the standard-bearers, then: Do Gibson and Stephanopoulos put their money where their lapel is? Survey says: 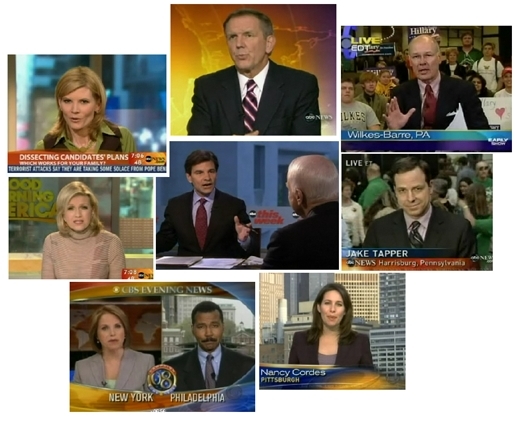 No flaggar! That's how the Swedes would say it, or close to how the Swedes would say it, but the upshot is the same: No flags. What does that say about the patriotism of ABC? Charlie Gibson, how do you convince other networks that this won't be a vulnerability? I know, I know, we added CBS in there — they both have complementary gold-tinged motifs, it just made sense — and besides, none of them are wearing a pin so who cares either way? Besides, adding a pin to Diane Sawyer would make her look less like an Oscar. 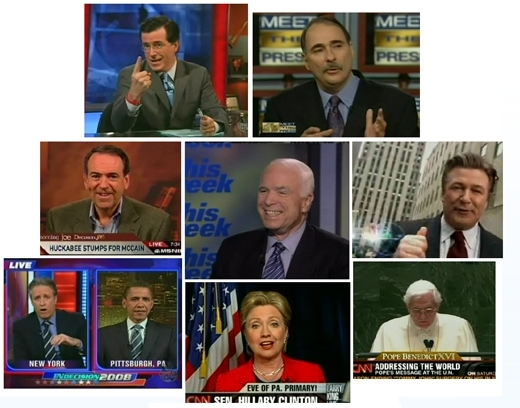 ...Jon Stewart and Stephen Colbert, obvs — and nary a flag in sight. (Though Colbert is sporting his WristStrong bracelet). What does that tell you about the flag pin, if a patriot like Colbert wears his lapel bare? Well, it tells John McCain and Hillary Clinton that they don't have to bother pretending to love this country, either. Same goes for surrogates (David Axelrod), runners-up (Mike Huckabee) and people who appear in that "I'm 4 New York!" ad (Alec Baldwin). But I would have expected better from the Pope.

Upshot: What does all this mean? That the whole flag-pin wearing thing is ridiculous — a personal choice, just like most other things in this great and democratic country, terrific if you choose to wear it and just as terrific if instead you choose to show your love of country and fellow countrymen and women through your actions, of which wearing a flag pin is but one? Seems that way to me — but what do I know, I'm Canadian.

Thanks to Dipayan Gupta for the assistance with photo upload.