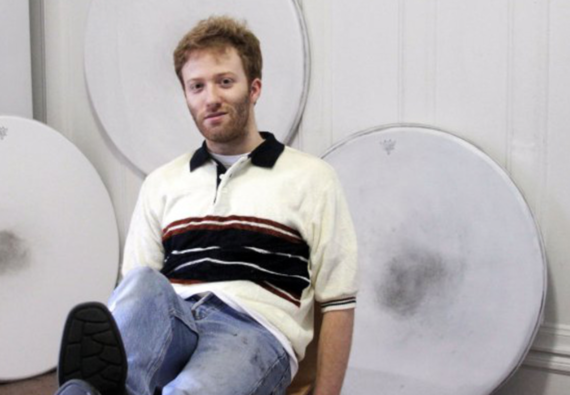 Any young artist would give his eye-tooth to have a piece of work exhibited at a major gallery in New York. Let alone two. Let alone three! But that's exactly what happened to Nick Farhi, a young artist I've been following for a while. Last week, you could see his work at the Leila Heller Gallery, the NADA Show, and the Ethan Cohen Gallery simultaneously. Impressive to say the least. But not as impressive as Farhi's work. 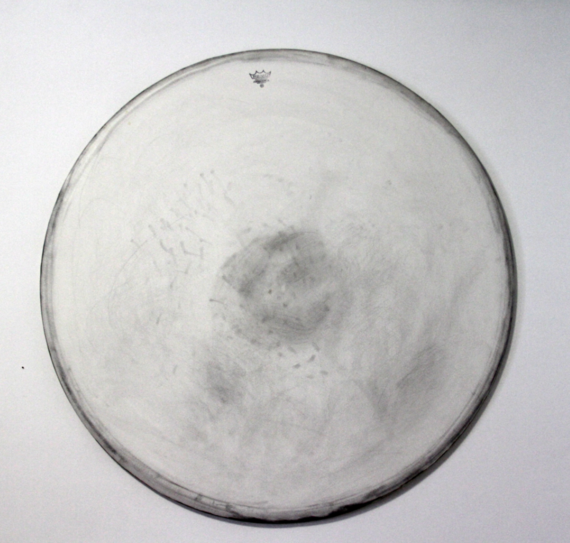 I first became aware of Farhi through his deeply moving "drum skin" paintings. In this series he makes his canvas out of a drum skin, that is, the white material that makes up the top of the instrument, complete with the manufacturing mark along with the vestiges of drumstick strikes -- the markings, usually created by the musician beating the hell out of the instrument, seem to represent the rhythm, the energy, and the passion of the player. Looking at these circular structures on a wall, the loudest sound in the orchestra is only a distant memory, the rhythms floating somewhere in the past; now the worn scuffs imbue peace and tranquility, an Agnes Martin for the Millennium, windows of human life and expression. 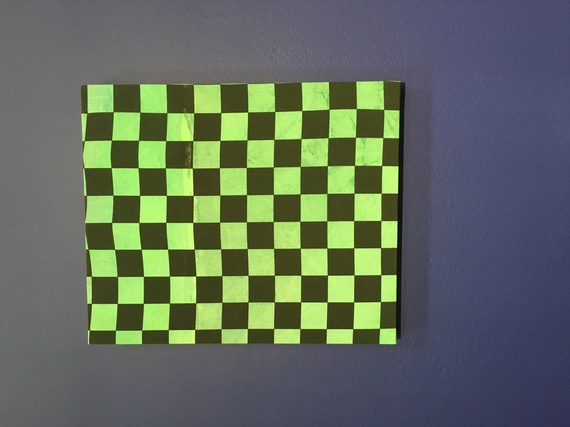 For three decades the Leila Heller Gallery has been identifying and cultivating the careers of artists who leave a lasting impact on contemporary art and culture. Her latest show, "Shrines to Speed, Art and the Automobile: From the Minimal To the Postmodern," features lots of cars, of course, but mostly destroyed cars, car crashes, tire skids, all rather violent. I'm surprised the late Los Angeles artist Carlos Almaraz who specialized in fiery collisions wasn't included. However, in the show were Andy Warhol, John Chamberlain, Richard Prince, John Baldessari, Ed Ruscha, Robert Raushenberg, plus Nick Farhi. Among the flattened car (Ron Arad), the tower of destroyed painted chromed stainless steel (Chamberlain), and the muddy tire tracks (Raushenberg), Farhi's work Green Flag, 2016 (Oil on Cotton 30x24in.) stood out by seamlessly combining all the elements of the show into one beautiful image, a checkerboard of racing stripes. Deep green cubes alternate with traditional black but there is a subtle undulation in the work; as my eye went down the painting, the slight shifts in the geometry, gently hinted at the power of NASCAR, representing the power and speed of the car itself and the unbridled energy of the possibility of destruction from an out-of-control accident. But then it all seemed calm. Again, I was reminded of Agnes Martin.

At this year's NADA, the New Art Dealers Alliance, which is always fun, I ran into Al Moran, founder of the OHWOW Galleries; Farhi used to sweep the floors at the New York location. I asked Moran about Farhi's career and trajectory. He said, without hesitation, "The sky's the limit." 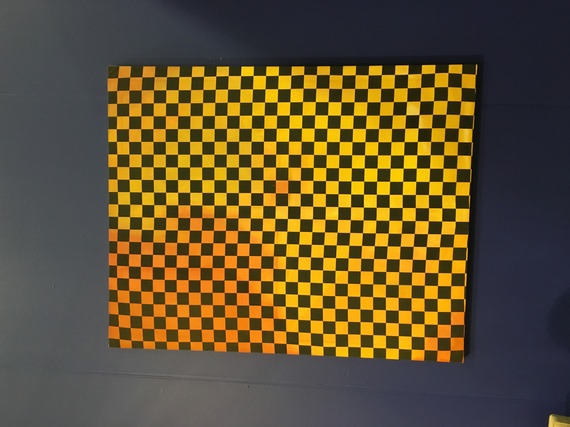 I went specifically to see the Rod Bianco Gallery exhibition of Farhi's latest. Bianco is based in Oslo but has garnished worldwide attention representing Bjarne Melgaard, the famous Norwegian artist based in New York. Almost every review I saw of NADA featured Grear Patterson's "716 Baseballs," also at the Bianco Gallery. I enjoyed the baseballs but I was dazzled by Farhi's monumental racing strip paintings. The smallish one at Heller gave no indication what the sequence would look like blown up. His three enormous paintings installed in a corner of the booth was an homage to speed/calm, Farhi's signature. Considerable larger than the one at the Heller Gallery, these pieces' modulating colors had bigger surfaces to command; there was an iridescence in them that danced across the paintings. Plus, the communication between these three paintings, a vertical dark blue and black one (108x51in.) the green (72x48in.) and my favorite, the shimmery yellow one, (also 72x48in) made for a combustible wall of energy, though one slowed down to embrace the artist's contemplative side..

"Some ideas can be seen as very simple'" said Farhi when I caught up with him at NADA, "but in actuality there's a much larger context at work. As with the drink stains or this new racing flag, these are things innately and infinitely in existence. I feel like celebrating those realities in continuing life as an artist, someone who engages with people every day. I feel that these are the secret languages."

Farhi appears at the Ethan Cohen Gallery as part of First We Take Manhattan, a show curated by Isaac Aden whose own work took over the top floor.

Downstairs houses one of the best "Wine Paintings," I'd ever seen. These Farhi paintings feature visceral mixtures of oil paint dripped in spots and blotches resembling the kinds of stains one fines on table clothes. The piece seems to be taking an ongoing survey of rare interactions in society. What happened to make those stains? Who were the diners? What were they saying, and to whom? It seems that Farhi's embrace of the unknown incudes a jovial spirit for the way we experience beauty in hardship. 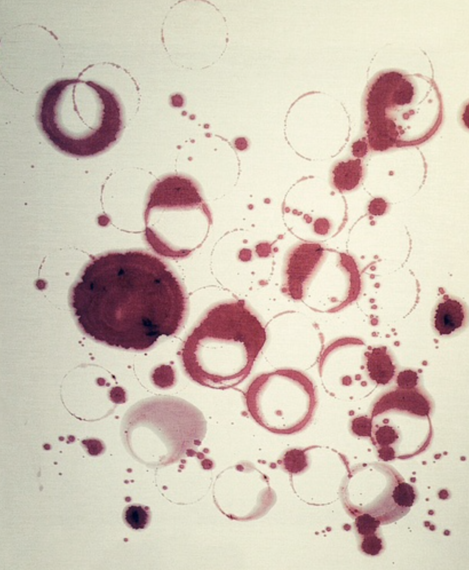 Of the piece, Vladislav Sludsky, the gallery manager said, "We all know the story of abstract expressionism and transcendencey and how to pass this universal, artistic, utilitarian message. But to put it on one canvas is extremely complicated and challenging. But what Farhi does is crop the pieces of this time and space moment of reality because that's his limitations as a human being and artist, but he does it truly and very sincerely." I felt rather proletarian after hearing Vald talk because I simply loved how the random stains seem to morph into a beating heart near the edge of a canvas; I thought of lovers spilling the wine as they talked about their future and suddenly an image emerged on their table.

Leo Fitzpatrick, co-director of the Marlborough Chelsea Gallery commenting back at the NADA show said, "My generation has come and had their moment. Now it's Nick's turn." Indeed.