Taco Bell has finally revealed the newest flavor of its wildly popular line of Doritos Locos Tacos, which first hit stores across the country in March 2012. Sort of.

The world's biggest Mexican fast food chain brought several samples of the newest member of the growing clan, which also includes Nacho Cheese and Cool Ranch, to The Huffington Post offices in New York for our staff to try. But the company refused to divulge the name of the flavor, referring to it only by the elusive, social-media-friendly moniker #___DLT.

That said, once we unwrapped the tacos, we were pretty sure we knew which Doritos flavor their shells are based on: Flamas. The telltale bright vermillion color tipped us off -- and the spicy taste, with a touch of lime that could only be detected when we ate the shell sans beef, all but confirmed it. Here's a side-by-side comparison of the new Doritos Locos Taco and a handful of Doritos Flamas chips: 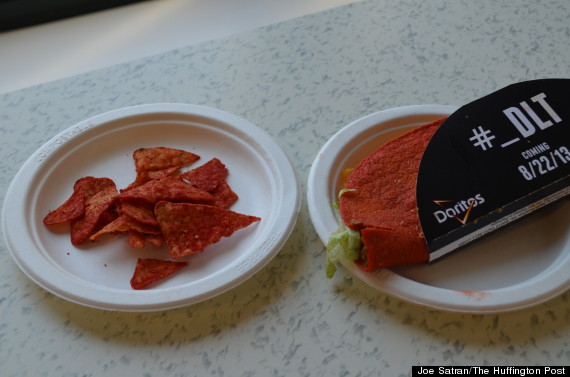 I'm going to call it now. I'm 97 percent sure the new Doritos Locos Tacos flavor is Flamas. It hits Taco Bells on August 22.

This did not come as a surprise to Doritos Locos Tacos devotees like us. Taco Bell had been testing the Flamas flavor in select stores for many months -- very successfully, according to sources within the company. In December, David Novak, the CEO of Taco Bell owner Yum! Brands, told investors he expected a Flamas Doritos Locos Taco to be released in the middle of 2013. And our friends at FoodBeast wrote definitively that it would be Flamas at the end of last week.

If you haven't tried Flamas Doritos before, think of them as the love-child of Flamin' Hot Cheetoes and Hint of Lime Tostitos. Their blazingly spicy kick is tempered only by a burst of lime flavoring. The chips are covered in so much red powder that when I ate a bag of them the other day, then blew my nose, I briefly thought that I was having a nosebleed.

The new Flamas Doritos Locos Tacos -- if that's what they are -- aren't nearly as intense as the chips. Taco Bell seems to have toned down the flavor dial for their tortilla shells even more for the Flamas than they did for Nacho Cheese or Cool Ranch. They're mild enough to appeal to all but the most milquetoast of palates.

However -- and this is a big however -- the Flamas still, even after the aggressive reduction, has a fuller-flavored taco shell than either the Nacho Cheese or the Cool Ranch. Its picante and citrus notes are assertive enough to stand up to the savory-salty innards of a Taco Bell Taco; they actually make a rather delicious contrast with the beef and cheese inside.

At the risk of sounding like total shills, everyone at HuffPost who tasted the new flavor agreed that it was the best Doritos Locos Taco yet. (And, uh, we would know.) That's a far cry from being the best tacos ever -- you can get fresher, healthier, better-tasting tacos at any truck in LA or Austin. But given that, according to a Taco Bell spokesperson, Americans have already bought 550 million of the first two flavors of Doritos Locos Tacos, it's not nothing, either.

Click through the gallery below for more photos of the new flavor of Doritos Locos Tacos:

UPDATE: A few minutes before publishing this post, I tweeted a photo of the new tacos declaring them to be Flamas -- because I figured, if it quacks like a duck, and it flies like a duck, it's a duck. However, Taco Bell replied to my tweet with this cryptic message, which seems to be a denial of my identification:

It's hard to know what to make of this. The Tweet links to a YouTube video in which the phrase "Getting Warmer" is slowly spelled out in flames, which seems like a gesture toward the Flamas theory. It's conceivable that the new shells are actually based on the Tapatio flavor of Doritos. But the new shells taste and look more like Flamas, and Tapatio Doritos aren't sold everywhere in the country.

So our best guess is that, if the new tacos aren't Flamas, they may be some new flavor that Frito-Lay crafted exclusively for Taco Bell. Maybe it would be called "Mas Flamas" or, more accurately, "Menos Flamas." There's precedent for such an innovation: Mountain Dew sells its "Baja Blast" flavor exclusively at Taco Bell. And Mountain Dew, like Frito-Lay, is owned by PepsiCo.