Flame-retardant chemicals permeate the world, and the bodies of nearly every person. But a new film and a new scientific study point to two groups of people whose risks of exposure may be particularly high: firefighters who venture into burning buildings and gymnasts who tumble into pits of foam blocks.

"Thinking about average exposure is not good enough," Renee Sharp, director of research at the non-profit Environmental Working Group, told The Huffington Post after a Seattle screening of the new documentary, "Toxic Hot Seat." "There are vulnerable populations, and they are often not who you expect."

Firefighters and gymnasts pride themselves on fitness and strength. Both may also be defenseless against potential health risks from invisible, pervasive and persistent chemicals.

In "Toxic Hot Seat," which will premier on HBO Nov. 25, retired San Francisco Fire Department captain and cancer survivor Tony Stefani describes his battle with transitional cell carcinoma, a very rare cancer normally found only in chemical industry workers. His doctor's response when he divulged his firefighting profession: "Do you realize you work in the chemical industry?"

"I said, 'I've never really thought of it that way, but I guess I do,'" recalled Stefani, who now heads the San Francisco Firefighters Cancer Prevention Foundation.

To battle a fire means confronting burning chemicals and their byproducts, including the flame retardants widely added to everything from clothes to couches to computers. Polybrominated diphenyl ethers, or PBDEs, chlorinated Tris, as well as newer replacement chemicals such as Firemaster 550 have been associated with neurological and reproductive disorders, and cancers. Many of the chemicals can linger in the environment and in a human body for years.

Shortly after Stefani's diagnosis in 2001, two more firefighters at his station came down with the same rare cancer. Recent research helps to validate suspicions shared by Stefani and other firefighters: Members of their profession face elevated health risks, possibly due to toxic chemical exposures. Levels of a common flame retardant measured in the blood of 12 San Francisco firefighters was two to three times higher than the levels found in the general population, according to a study published in February. A study by the U.S. National Institute for Occupational Safety and Health, released last month, found higher rates of cancer in 30,000 U.S. firefighters than the general population. 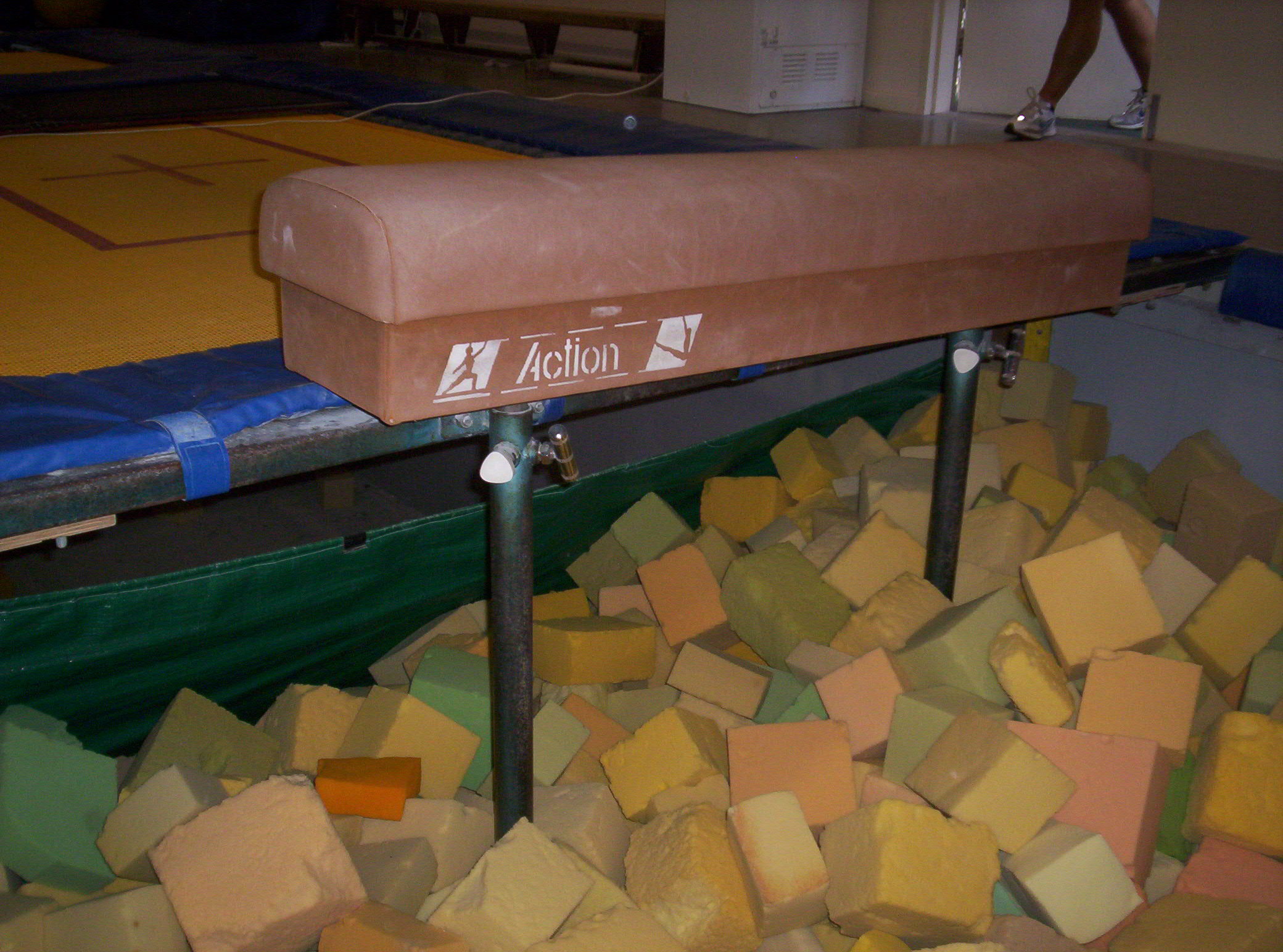 Courtney Carignan, a postdoctoral researcher at The Children's Environmental Health and Disease Prevention Center at Dartmouth University, spent much of her youth vaulting onto squishy mats and tumbling into pits of soft cubes.

During those 12 years in the sport, the thought never crossed her mind that she might be touching, inhaling and ingesting chemicals that could endanger her health.

"I did think about how the pit probably had some gross stuff in it," said Carignan, who was at Boston University School of Public Health when she led a small study published last week on gymnasts' exposure to flame-retardant chemicals.

Carignan recalled the coatings of dust after her soft landings in the pit, and how her team would help remove the foam cubes and vacuum inside the pit before going for pizza.

In the new study, Carignan and her colleagues found four to 6.5 times more flame retardants in the blood of 11 collegiate gymnasts than in the U.S. general population.

In their attempts to pinpoint the source of exposures, the team found air and dust samples with concentrations of flame retardants greater than in residential homes. Hand-wipe samples showed the athletes had higher levels of the chemicals on their skin after practice than before practice. Other persistent pollutants appeared at levels in their blood that were similar to the general population, suggesting diet was an unlikely factor in the elevated levels of flame retardants.

Flame retardants added to polyurethane foam -- whether the filling in a couch cushion or an unupholstered block in a gym -- are not chemically bound. This makes it easy for them to escape into the air and attach to dust particles, especially as the foam is repeatedly compressed. The more physical abrasion of the foam, the more the chemicals are freed to find their way into someone's body.

"The migration of chemicals out of this [gym] foam is greater than residential furniture," said Heather Stapleton, a Duke University chemist and co-author on the study. "And you've got kids jumping on it constantly."

Bryan Goodman, a spokesman for the the industry group American Chemistry Council, noted that the study did not report on any adverse health effects and pointed out the U.S. Centers for Disease Control and Prevention's distinction between exposure to a chemical and any harmful effects it might cause.

Stapleton and Carignan said their study was not designed to investigate health effects. They did, however, point to prior research suggesting that exposure to flame retardants may interfere with brain development, a woman's chances of getting pregnant and the health of her future progeny. Whether or not a young gymnast could face specific risks from exposures during puberty is not yet clear. Among the growing concerns over some flame retardants, as well as other chemicals widely used in consumer products such as bisphenol A, or BPA, is their propensity to disrupt hormones.

Carignan founded the Gymnast Flame Retardant Collaborative to provide information for the gymnasts and as a resource for future research, such as testing foam equipment for flame retardants and investigating potential health effects. Both researchers recommended that gymnasts thoroughly wash their hands and shower after practice or competition that exposes them to foam.

Kirby Walker, co-producer and co-director of "Toxic Hot Seat," never considered exposures to gymnasts while working on the film. She called the new findings "significant," and "upsetting."

The new study and documentary come as momentum builds to reform the regulation of toxic chemicals in the U.S. and Europe. The stakes are high, as HuffPost reported earlier this month.

Flame retardants are no exception. According to a report published this week by the nonprofit Environment and Human Health Inc., nearly 1.5 million tons of flame retardants, including some 200 distinct chemicals, are produced every year. The report predicts the global market for flame retardants may reach $7 billion by 2017.

Even if new regulations curtail use of flame retardants, Walker said the chemicals will stay with us a long time. "The average piece of furniture lasts 30 years," she said. Foam blocks in gymnastics gyms hold up as well.

Fabrics with special weaves, state-of-the-art sprinkler systems and fire alarms have reduced but not completely eliminated the need for flame retardants, some experts have pointed out. The chemicals may still play an important protective role, they say, in airplanes, cars and other high-risk situations.

"Our companies have a decades-long track record of helping to improve safety for families in dangerous fire situations," the American Chemistry Council said in a statement responding to "Toxic Hot Seat." "Home fires are still a problem across the country."

Goodman, the trade group spokesman, shared a letter he sent to makers of the film, calling the documentary's methods "biased and ethically questionable," and suggesting the filmmakers had a "preconceived view on this issue." Chemical companies that make flame retardants declined to be interviewed for the documentary. 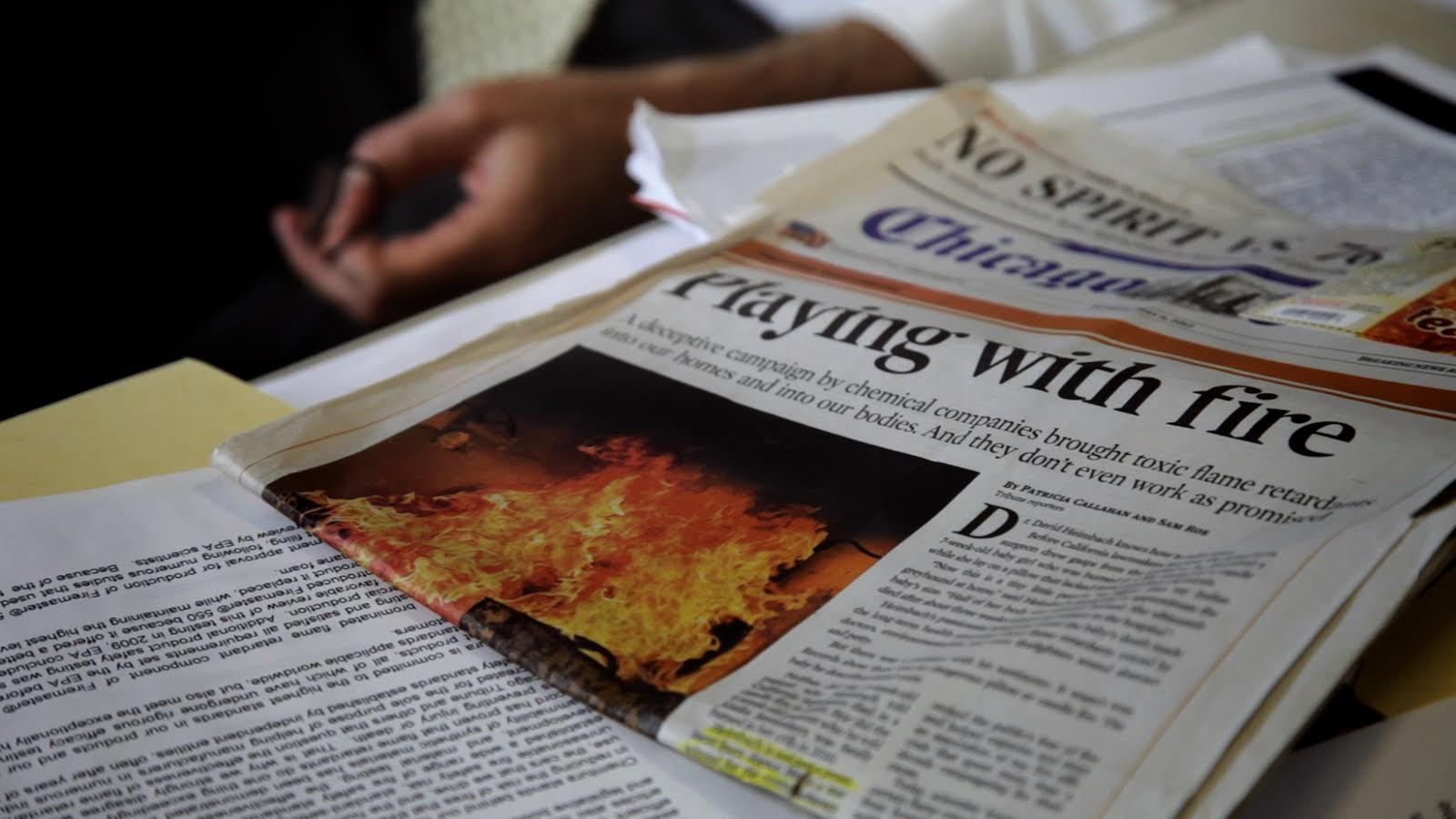 The Chicago Tribune’s 2012 series on flame retardants was a finalist for the Pulitzer Prize.

Public concern surrounding flame retardants has grown since The Chicago Tribune published an award-winning series "Playing with Fire" last year. The stories revealed industry deceit about the effectiveness of the chemicals and potential health risks.

"You get maybe a slight benefit of a few seconds of ignition time," Vytenis Babrauskas, founder of Fire Sciences and Technology Inc., a source in that series, says of flame retardant use during "Toxic Hot Seat." "But you do get great gobs more of noxious chemicals that are put out in the smoke and they are going to be toxic to human beings."