Flamingos are among the most iconic of birds. Their common name derives from the Latin flamma for flame, referring to its color, and indeed the Ancient Egyptians used the flamingo in hieroglyphics to indicate the color red. They are among the commonly represented animals in zoos worldwide. We use replicas of them as lawn ornaments.

They have been long thought to be among the most ancient of living birds, a relict lineage related to either waterfowl or storks. But new studies of these graceful birds recast them as a relatively new avian group. A reassessment of flamingos, with their highly specialized ecology and their essential place in our world, is in order. 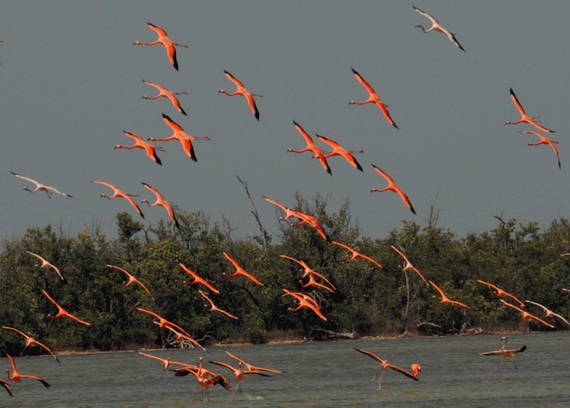 Flamingos are nomadic in their movements to find shallow saline wetlands for feeding. These are Caribbean Flamingos, arriving in tidal wetlands of the Zapata Swamp in southern Cuba. Photo: Steve Zack ©WCS.

Recent genetic studies make clear that flamingos are not closely related to either waterfowl or storks, but rather more distantly to grebes. And the six species of modern, morphologically specialized flamingos living today are in fact only 5 million years old -- quite young in the long history of modern birds that dates to before the end of non-avian dinosaurs 65 million years ago. New and vibrant, not old.

And they add makeup to keep themselves vibrant. Unique among birds, flamingos add oils containing the pink-red carotenoid pigments to their feathers to enhance their appearance. The oils are gathered from their preen (uropygial) glands. Those same pigments (which, in turn, are obtained from their diet) are in the feathers. But feathers are dead at maturity in all birds, and so only through molt can other bird species brighten their appearance.

Flamingos are among the most specialized of feeders. They turn their heads upside down to filter feed, their tongues functioning like pumps. They suck water into the front of the bill and then squeeze it out the sides through lamellae that act as filters to keep food in while flushing water and grit out. Novel erectile tissue in the mouth likely assists in enhancing the rigidity of the feeding apparatus. Flamingos are more whale-like in their feeding mode than bird-like. 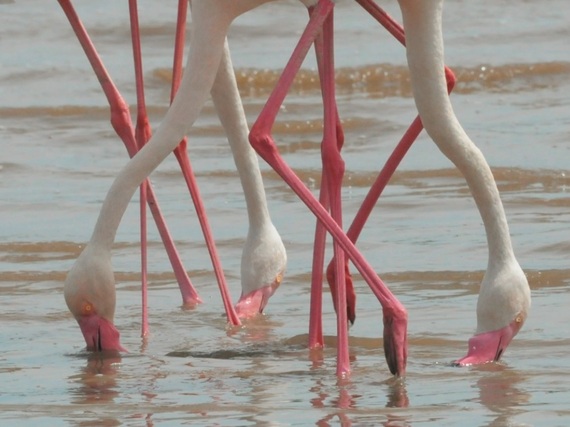 Flamingos, like these Greater Flamingos in Serengeti National Park, feed "upside down", using their tongue as a pump to facilitate filter feeding. Photo: Steve Zack ©WCS.

Three of the flamingo species -- the Caribbean Flamingo, the Chilean Flamingo, and the Greater Flamingo of Africa and Southern Europe -- have "shallow-keeled" beaks with comparatively few coarse lamellae to accommodate a more general diet of relatively large prey items like crustaceans and mollusks.

The three other more recently derived species are "deep-keeled" and have numerous and very fine lamellae for filtering blue-green algae and diatoms. These more specialized feeding species all face threats in the wild and are red-listed by the IUCN. They include the Lesser Flamingo of East Africa and the high-elevation Andes ("Altiplano") species that include the James's and Andean Flamingo. 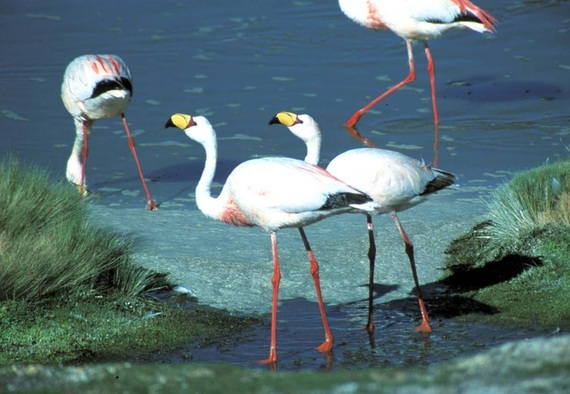 Laguna Colorada in Bolivia is the main breeding site for James's Flamingos. With their characteristic bright yellow beaks, James's Flamingos are classified as Near Threatened by the IUCN. Photo: Omar Rocha ©WCS.

The flamingo species all feed on shallow saline wetlands, most often inland lakes. They move nomadically in time and space to feed, often in huge aggregations of thousands (even millions for Lesser Flamingos) of one or more species. They colonially breed on dry sites of such lakes in very caustic settings, keeping would-be terrestrial predators at bay.

Certain lakes are critical as breeding sites for at-risk flamingo species: Lake Natron, Tanzania is essential for Lesser Flamingos, Laguna Colorada in Bolivia is the main breeding site for James's Flamingos, and Mar Chiquita Lake in Argentina is the most important for Chilean Flamingos. These lakes are threatened by mining and geothermal development.

Saline lakes occupy a similar surface area on the planet worldwide as fresh water lakes (although the volume of the latter is far greater). Yet the ecological understanding of how saline lakes "work" and their productivity patterns are poorly understood. We need to understand more of how these lakes function, and in particular why certain lakes are attractive to feeding flamingos at some times and not others. 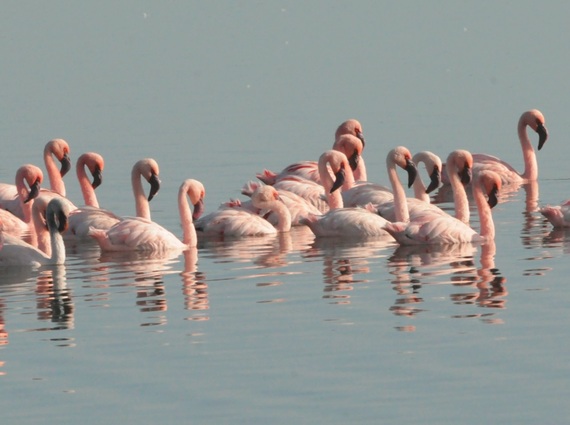 Lesser Flamingos in East Africa resting between feeding bouts. The rich color of flamingoes comes from carotenoids in their diet gained from feeding in saline lakes. Photo: Steve Zack ©WCS.

Once we understand what drives the nomadic movements of flamingos, we can better predict how the changing climate will affect saline lake use by flamingos into the near future. Because most climate projections indicate generally hotter temperatures and less rainfall in regions important to flamingos, we need to look at how those factors may change the lakes where flamingos feed and breed. That knowledge will guide decisions on where to invest our conservation efforts now and into the future.

The flame birds brighten our lives. They are vibrant, distinctive, and spectacular, after all, and they are applying the makeup to keep our interest in conserving them.