Dong Nguyen, developer behind 'Flappy Bird' has admitted that he basically just "got lucky".

Nguyen Ha Dong, the mind behind the inexplicably popular iOS and Android game, said that he was shocked to see the game rise to the top of virtually every App Store chart going, almost overnight.

Dong, who is from Hanoi, Vietnam, has two other titles in the App Store top 10 free apps chart, making for an unprecedented three places for a small-scale publisher.

And while they're free, don't think he's not making money - all of the games carry advertising, and all are doing well.

He told Techcrunch: "I don’t know how my games can be so popular. Most of my players are kids in schools. I would like to thanks them for playing my game and sharing it to other people."

The man behind them is 29 years old, and has run the .Gears studio for about four years.

"Mostly, we're making arcade games that are bite-sized, take no more than a few minutes of playing right on smartphones and tablets.

Our work is heavily influenced by retro pixelated games in its golden age. Everything is pure, extremely hard and incredibly fun to play."

He added in another interview that Flappy Bird too about three days to make:

All the programming took around 2-3 days at best with all the tuning to make the gameplay feel right. In my games, there is no impossible situations that players cannot pass. 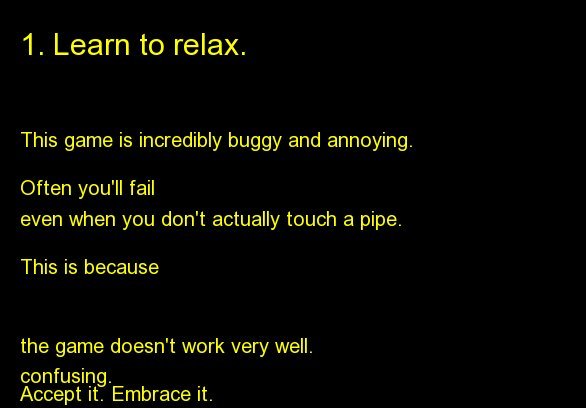 1 / 9
1. Learn to relax.
This game is incredibly buggy and annoying. Often you'll fail even when you don't actually touch a pipe. This is because the game doesn't work very well. Accept it. Embrace it. Life is confusing.