Curse your slow fingers, shake off another small piece of dignity, then press Start again. Just one more time.

If you're not already tortured by the exercise in futility that is "Flappy Bird," here's what you need to know about the hottest new mobile game: It's a seemingly effortless, highly addictive iPhone and Android game. Players have to get the bird through the green pipes by tapping on the screen and making him flap his wings.

Oh, and, everyone you know is playing it. The app has reached the No. 1 spot on both the App Store and Google Play over the course of the last week.

If you haven't tinkered with it yet, give it a try. Just try not to pay heed to the hundreds of reviews warning you to turn back now before all hope is lost. Only some people's lives turn into dark pits of despair and broken dreams. Odds are you're going to be just fine. Just kidding. You're going to hate yourself. 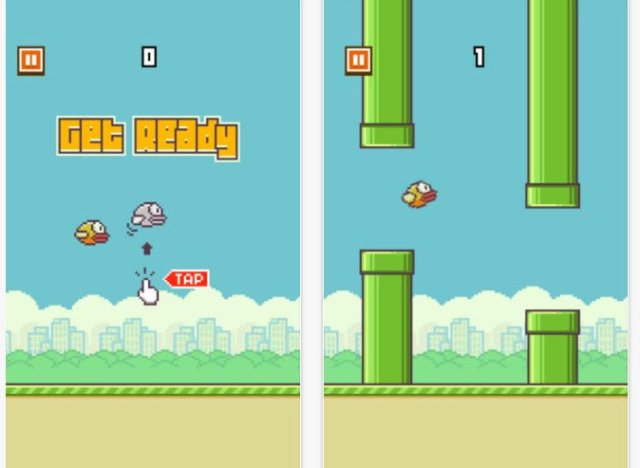 The game's basic premise is quickly uprooted by its warped sense of physics. Pipes are closer than you think they are. The bird always falls or rises faster than you need it to. Your fingers can't relax enough to easily make it through obstacles, and then, just when you're settling into the rhythm of the game -- BLAM! -- there's an ad that pops up on the bottom of the screen and totally breaks your focus.

So how has this endlessly frustrating, seemingly glitchy game topped Snapchat and Facebook apps in downloads this week? Don't ask the developer, Vietnamese indie developer Nguyen Ha Dong, who recently said he's put absolutely no effort into marketing any of his three games, all of which are currently in the top 10 free apps on the App Store.

It's likely the natural "shareability" of the game has led to its enormous success.

"Flappy Bird" is both, and neither, of these genres; it breaks both categories down to their barest elements to create a new style of game. And, if the 490K-plus ratings on the App Store are any indication, this new genre seems to be going over pretty well with consumers.

So how has this contributed to the game's virality? A few reasons:
Advertisement

Basically, the game is so senselessly difficult that you need to tell everyone you know about it.

So is "Flappy Bird" the new genre to watch? Probably not. Who knows what future updates will hold, or what the inevitable "Flappy Bird 2" will look like, should it ever arrive, but the success of the original seems to come down to a very specific and perfect formula, built for two things: senseless difficulty and virality. This perfect combination comes together in an easily shareable game that no one is very good at but everyone wants to talk about.

But as the Atlantic points out, "Flappy Bird" continues, seemingly unaware of its own success or of the trauma it seems to be causing mobile gamers. "'Flappy Bird' is not amateurish nor sociopathic. Instead, it is something more unusual. It is earnest. It is exactly what it is, and it is unapologetic. Not even unapologetic—stoic, aloof. Impervious. Like a meteorite that crashed through a desert motel lobby, hot and small and unaware."

So gamers, keep plugging away at your high score, and developers, keep trying to mimic its success. Just don't expect "Flappy" to care about your failures.