Amelia Gray, Lindsay Hunter and a handful of other recently buzzed-about novelists got their literary starts in shorter-form writing. No, not poetry -- the more nebulous medium of flash fiction. Loosely defined as writings comprised of 1,000 words or less, flash fiction can include everything from slightly longer works to tweet-length stories. The one restriction? A work of flash fiction must have a narrative arc, otherwise it's a mere observation or vignette.

Gray's move from flash fiction writer to novelist was a difficult transition for the writer, who's returned to shorter form in her latest collection, Gutshot: Stories. In an interview with Flavorwire, she explained that her flash fiction collection was "a multifarious but cohesive piece of work." She added, "Sustaining a true narrative over the course of a novel was a unique challenge."

Hunter described a similar struggle with novel-writing in an interview with The Believer: "I decided the only way I could write a novel was to sit down and write the way I knew how, which was to give myself a daily word count goal, and to treat each 'chapter' like a flash fiction piece."

Of course, flash fiction shouldn't be seen as a segue into novel-writing; some writers waffle between the mediums, whereas others stay devoted to producing quick, evocative pieces. We've collected 12 of our favorite recent pieces of flash fiction, both by established novelists and writers happy working solely within the shorter form:

"Out There" by Lindsay Hunter
Published by The Nervous Breakdown
First sentence: "People burn cars out there."

"Robot Exclusion Protocol" by Paul Ford
Published by Ftrain
First sentence: "I took off my clothes and stepped into the shower to find another one sitting near the drain."

Untitled by Deborah Levy
Published by The Guardian
First sentence: "I said, yes."

"These Are the Fables" by Amelia Gray
Published by Recommended Reading
First sentence: "We were in the parking lot of Dunkin' Donuts in Beaumont, TX when I told Kyle I was pregnant."

"I’m Being Stalked By the Avon Lady" by Nancy Stohlman
Published by Cease, Cows
First sentence: "At first it wasn't so bad."

"Huxleyed Into the Full Orwell" by Cory Doctorow
Published by Terraform
First sentence: "The First Amendment Area was a good 800 yards from the courthouse, an imposing cage of chicken-wire and dangling zip-cuffs."

"The Lamp at the Turning" by E. Lily Yu
Published by Kenyon Review
First sentence: "For ten years the streetlamp on the corner of Cooyong and Boolee kept vigil with the other lamps along the road."

"How to Sit" by Tyrese Coleman
Published by PANK
First sentence: "Grandma slapped my foot, uncrossing my legs."

"The Solidarity of Fat Girls" by Courtney Sender
Published by American Short Fiction
First sentence: "It is your luck to be the brother of three fat girls."

"Maybe We Should Get Tattoos and Other Possibilities for Happiness" by N. Michelle AuBuchon
Published by Hobart
First sentence: "I don’t know if my husband and I are on the way to church or a hangover." 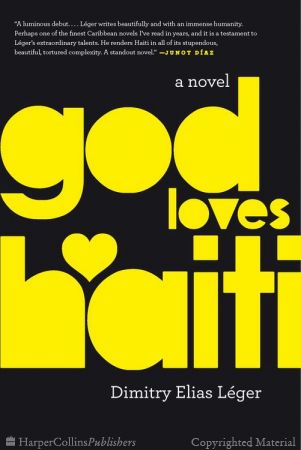 1 / 12
'God Loves Haiti' by Dimitry Elias Léger
"With shimmering, lyrical prose, Léger conjures an incisive vision of Haiti's complex heritage, tortured soul and dauntless spirit." Can an unimaginable catastrophe bring forth a triumph of the imagination? It can and, in the case of Haiti's 2010 earthquake, has with this bright, brilliant novel. Read full book review here.