"Get over slavery already!" Trust. Many of us are so over it! And its ripple effect! With recent findings in epigenetics and ongoing issues of systemic racism, it's obvious that is easier said than done. For all of America including white people who were also warped by it. Until there is public and universal acknowledgement that chattel slavery, its successor, the Black Codes and the Codes' successor Jim Crow (which lasted until almost the 1970s), we can't quite fully heal. It's like black people have been an abused child that grows up to then go from one abusive relationship to the next to the next and who even also inflict some self-sabotage at times due to the traumatized psyche. Until that's fully accepted complete with accountability by American society as a whole, this national healing which is still underway for all involved can never be complete.

So a remade version of Alex Haley's Roots would be nothing short of relevant, right? There's a whole generation of people out here who have never read the novel, seen the original miniseries nor even heard of the story based on true events in the lives of author, Alex Haley's ancestors. Hell, even prior slavery-based films and shows often water slavery down excluding certain subjects that Americans aren't ready for like breeding farms and sexual abuse of men. With the inclusion of whitewashed textbooks glossing over the horrors of slavery, wouldn't an updated Roots have a huge impact on us all? Well, there are some who feel that its impact is just one more trauma to add to our psychic scar tissue.

Just yesterday, I was having a conversation with my friends, Jess and Toni and my brother, Curtis. I was excited to see the modern production values and star-studded cast including Forest Whitaker, Anna Paquin, Jonathan Rhys Meyers and Anika Noni Rose among others take these characters that I either loved or hated... Who transformed my and so many other Americans' understanding of American History and clearly opened our eyes to its legacy. My excitement was not shared by all. 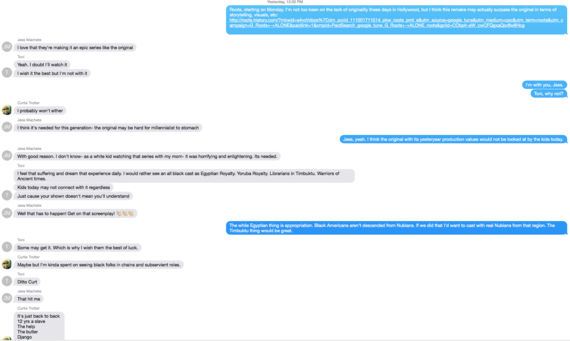 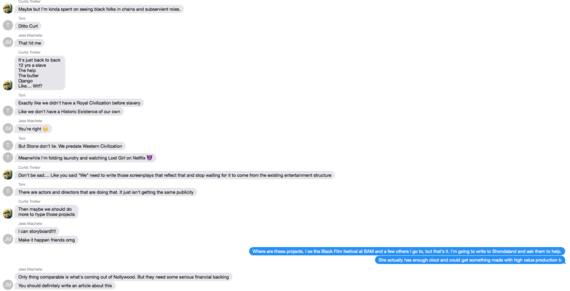 On one hand, Jess' point as a white woman who was awakened to the social ramifications of slavery is valid. Especially, in a modern times, where the fallacious adjective, "post-racial" is thrown around like tequila shots by Manhattan yuppies on Cinco de Mayo. However, Curtis and Toni's reaction really struck me even more. No black person will ever not be affected by slavery. Almost no blacks in the Americas today would exist if our ancestors hadn't been thrust into this situation and come out on the other side. However, does a constant revisitation of it in popular culture do us any real good? Or is it a constant trigger? Black people themselves have told me that watching films, like 12 Years A Slave and The Help really make them hate white people in the moment while watching. And I think that's not just because of the dehumanization we endured during the periods in which these films are set, but also because even still our existences are capped even in entertainment to which we go for an escape. Even though our existence is focal to the films, we're still at the periphery and in deferral to the whites featured in them. Are we nothing more than subjugated objects, and is that existence seen as our alpha and omega? Does the world really believe that we've contributed nothing more to the annals of history aside from being exploited mind, body and soul for profit and whatever predilections and whims our captors had in mind? Looking at the list that Curtis rattled off, it's a bit disheartening. And then there are two more slavery-based films due out this year. Granted, one is inspired by the true story of Nat Turner's rebellion and show us in a light of not taking shit lying down, and the other, inspired by true story of Newton Knight, a white man who rebelled against the Confederacy during the Civil War. So yet again, more violence and degradation toward us with a sprinkling of white savior added in for flavor.

Admittedly, I'm sort of stuck at an ambivalent catch-22 here. I certainly feel that these stories need to be told and accurately so, because left to its devices, society will revert to more troglodytic attitudes (re: "Make America Great Again"), but what about all the other stories of black history that show its other facets? Like Toni mentioned, what about the legendary empires of Mali, Soghai and Ghana that flourished in the Sub-Sahara Africa during a gold age of arts and sciences? Or as Curtis mentioned, stories of everyday black people thrust into extraordinary situations, like the short film, Raising Dion, which could be utterly fantastic if expanded into a feature-length production. I don't know about y'all, but I would love for Shonda Rhimes or someone as pluralistic and revolutionary, imaginative and inclusive to breathe life into these stories and tell them from our viewpoint versus yet again being told by middle-aged white men who often don't get the nuances and idiosyncrasies of the black experience a la a well-intentioned Matt Damon previously not getting why diversity behind the camera matters.

Though I'm a bit tired of Hollywood remakes of all my favorite shows and movies and would love for new stories to be told, I will watch Roots this week, because I genuinely am intrigued to see what it will be like in comparison to the original. And I will watch it with hope that, like the people in it who had steel in them, that we will start doing what's right for ourselves; making our own voices heard in the way they should be. Even if that means, doing it on our own.