Police in Venice, Fla., are looking for a serial flasher with a bizarre M.O.: He allegedly offers his victims money in exchange for the right to kiss their posteriors.

There have been at least four reports of the "Butt-Kissing Flasher" since Saturday. In one case, two women said he gave them a note asking if he could put his lips to either of their tushies for $200.

He went on to write: “If you wave to me, I'll drop to my knees and play with myself while you watch,” the Herald-Tribune reported.

He promised to leave the money on the ground and walk away after the encounter. When the victims didn't respond, he allegedly whipped off his towel and "performed inappropriate actions to himself," one of the women told The Venice Scoop.

Instead of taking the offer, the victims took a photo of him and the note, which The Venice Scoop posted on their Facebook page. 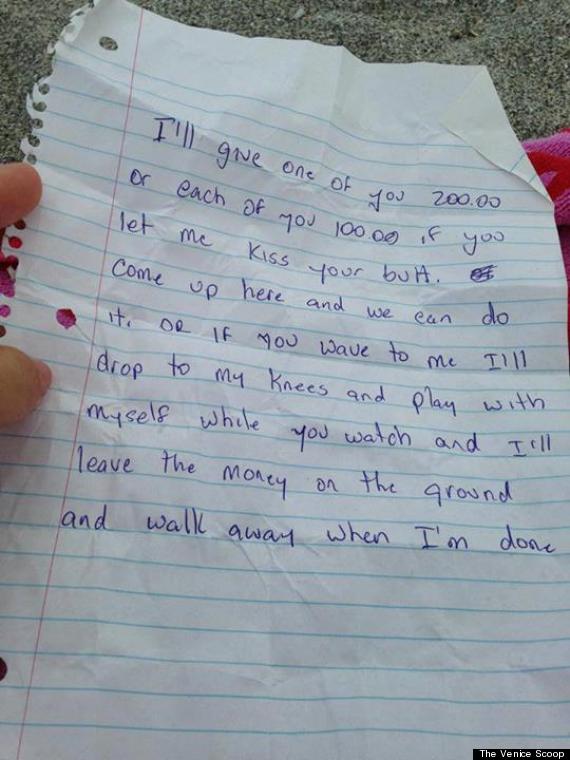 The post described the perp as a heavy set guy, around 35, "with man boobs, and it looks like a tat on his right bicep."

Venice Police Chief Tom McNulty has seen his share of sex crimes in the past, but this suspect has put a new wrinkle on an old perversion.

"I can't remember where somebody has done this and left a note," he told WWSB. "I have worked sex crimes here for many years as a detective. It's a new variation."

Anyone with information about the flasher is encouraged to call the Venice Police Dept. at (941) 468-2444.